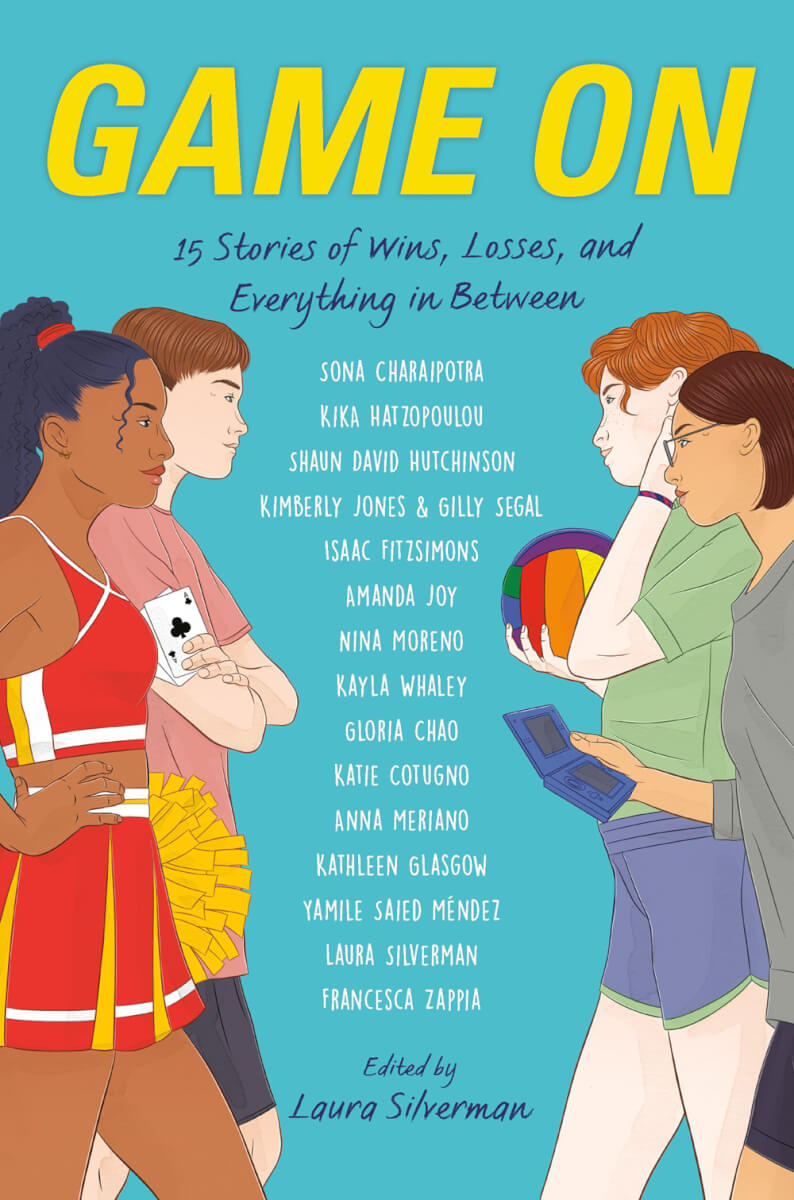 Give this to a reader who has a competitive streak, whether it manifests on the field, in the classroom or at game night.

Game On: 15 Stories of Wins, Losses, and Everything in Between highlights the importance of “playing the game” to find yourself. In each tale, characters interact with a game, from sports and video games to neighborhood pastimes and more. Many stories illustrate the thrill of competition, even as characters grapple with why rivalries and the act of winning mean so much to them. Nearly all the stories capture the central game’s emotional underpinnings, allowing characters to become closer to one another, to find courage in other aspects of their lives or to see something in a new light.

Standout story: Gloria Chao’s “Mystery Hunt” follows two college freshmen who share an adorably nerdy passion for language puzzles as they embark on the linguistics department’s annual scavenger hunt. As they race to piece clues together, Faye’s growing friendship with her cute classmate, Pierce, inspires her to form deeper connections with other people in her life. The story’s puzzles are challenging, the emotional stakes are high, the pace is fast, and by the end of the hunt, readers will be eager for more adventures with Faye and Pierce.

Give this to a reader who yearns to expand the limits of what is possible.

Every story in Tasting Light: Ten Science Fiction Stories to Rewire Your Perceptions masterfully demonstrates how powerful science fiction can be. Whether the teens in these futuristic tales are sipping coffee in a spinning city, exploring parallel universes or experiencing bold new technologies, they’re contemplating themes like race, class, disability and gender as thoughtfully as teens today, while dreaming up new and inventive ways to improve themselves and their worlds. As one character muses, “You can be a teenager and make things happen. They’re not mutually exclusive at all.”

Standout story: Junauda Petrus-Nasah’s “Melanitis” begins in the middle. What’s a FAN, and why is it a big deal that another one has been murdered by police? To give away more would spoil the experience: As narrator Amari processes the unfolding news, so do we. Petrus-Nasah takes a classical sci-fi theme—the perils of scientific overreach—and applies it to the disparity between joyous Black energy and the dangers of being Black in a white-dominated society. The result is daring and devastating.

Give this to a reader who is smitten with all things magical, mysterious and macabre.

In Eternally Yours, editor Patrice Caldwell collects 15 paranormal romance stories that feature supernatural suitors ranging from ancient immortals to undead high school students. Many of the tales have contemporary settings, their speculative elements intertwined with familiar teenage concerns like part-time jobs and parties. These realistic details—and the often relatable protagonists—give the collection a grounded core that allows readers to truly connect with larger-than-life dramas such as hunting vampires or making out with mermaids. This anthology will sweep romance-minded readers away into one otherworldly love story after another.

The standout story: Marie Rutkoski’s dreamlike “Bride-Heart” follows a teenage waitress caught up in the ominous affections of a wealthy older man. As it becomes clear that there is far more to the rich stranger than anyone suspects, a test of agency, control and subtle magic unfolds. Rutkoski crafts an atmosphere of creeping dread as she upends many paranormal romance tropes. Her tense, twisty tale will keep readers guessing all the way to the end.

Give this to a reader who knows exactly what they’d do if they woke up with superpowers.

Many of today’s most successful superhero stories were dreamed up long before current teenage readers were born. The 13 tales in Generation Wonder: The New Age of Heroes introduce brand-new, contemporary superheroes across a range of genres, from comical adventures to fast-paced thrillers. In a clever touch, each story opens with an illustration in the epic style of a comic book cover by artist Colleen Doran. Diverse, imaginative and entertaining, these stories prove that extraordinary heroes can truly come from the most ordinary circumstances.

The standout story: In Nulhegan Abenaki author Joseph Bruchac’s “Ordinary Kid,” Leonard is a Native American teen just trying to survive high school—and figure out how to use his newly acquired superpowers, of course. After an encounter with a mysterious entity called Crow, Leonard becomes telekinetic and gains an “uncanny ability to sense when someone [is] picking on someone else.” He decides to use his powers to disrupt his town’s drug trade before turning his attention to an even more dangerous target. Leonard’s self-deprecating humor and hunger for justice call to mind such well-known superheroes as Captain America and Spiderman.

You’re Safe With Me: 11 of the Best Bodyguard Romances
10 Best Heavyweight Hoodies: Thick and Warm Sweaters For 2023
Michael Shannon Talks Rust Tragedy And Alec Baldwin Charge: ‘It’s A Nightmare’
‘It’s why we’re on the brink of extinction’: Crackdown urged on fossil fuel lobbyists at COP summits
A Cinderella Story’s Hilary Duff Is Proud of Jennifer Coolidge