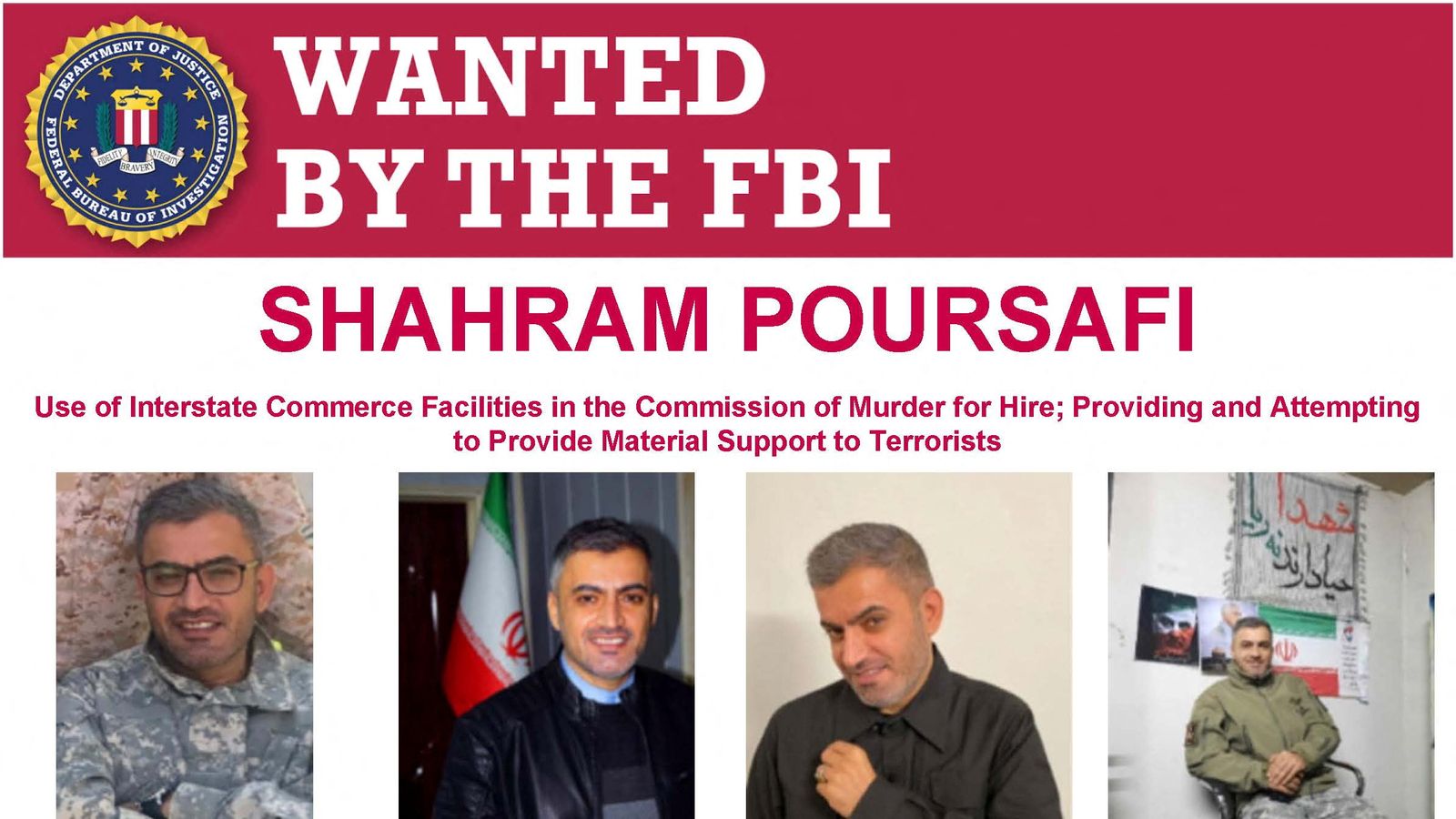 The US says an Iranian operative has been charged over an alleged plot to murder John Bolton who was national security adviser to former president Donald Trump.

Shahram Poursafi, who American officials state is a member of Iran’s Islamic Revolutionary Guard, is wanted by the FBI on charges related to the alleged murder-for-hire plot.

Mr Bolton told Sky News: “I think this is a plot by the Iranian government against a former official of the US government. I can say I’m not the only one that the Ayatollahs in Tehran are trying to assassinate.”

He added: “It’s not just former government officials, it’s private citizens in the US. This is a murderous, lying regime. It’s an enemy of the US and we need to treat it that way.

“I think this unsealed (charge) document helps the citizens of the US and really in the world as a whole see exactly what the nature of the regime in Tehran is.”

According to the US Justice Department, the alleged plan was likely to be in retaliation for the January 2020 US drone strike that killed the head of Iran’s elite Quds Force, Major General Qassem Soleimani – dubbed the second most powerful person in the Middle East country.

They said Iranian national Poursafi, also known as Mehdi Rezayi, “attempted to pay individuals in the United States $300,000 (£245,000) to carry out the murder in Washington DC or Maryland”.

Poursafi, who remains at large abroad, had never denied his involvement with the Quds Force, say US officials.

If convicted, he faces up to 10 years imprisonment and a fine up to $250,000 (£204,000) for the use of interstate commerce facilities in the commission of murder-for-hire.

He would also face up to 15 years in jail and a fine up to $250,000 for providing and attempting to provide material support to a transnational murder plot.

Iran’s mission to the United Nations did not immediately respond to a request for comment, and Iran does not have an extradition treaty with the United States.

In a statement, Mr Bolton, who was in his post from 2018 to 2019, thanked the FBI and Justice Department.

“While much cannot be said publicly right now, one point is indisputable: Iran’s rulers are liars, terrorists, and enemies of the United States,” he said.

Timeline of alleged events, according to the Justice Department:

:: On 14 November 2021, Poursafi, 45, contacted a confidential human source, or CHS, and then offered them $250,000 to hire someone to “eliminate” the former national security adviser.

This amount would later be negotiated up to $300,000. Poursafi added that he had an additional “job,” for which he would pay $1m.

:: On 19 November 2021, Poursafi told the CHS that it did not matter how the Bolton murder was carried out, but his “group” would require video confirmation of the target’s death.

The CHS asked Poursafi what would happen if the killing was attributed to Iran. Poursafi told the CHS not to worry and that Poursafi’s “group” would take care of it.

:: On 1 February 2022, Poursafi told the CHS that if he/she did not eliminate the target within two weeks, the job would be taken from the CHS.

He also informed the CHS that someone checked the area around the former national security adviser’s home, and he believed there was not a security presence, so the CHS should be able to “finish the job”.

:: On 10 March, 2022, Poursafi told the CHS he had another assassination job for the CHS in the United States, but to “keep [the former national security adviser] in the back of your mind”.

About one month later, Poursafi encouraged the CHS to accept this offer, explaining that if it was done successfully, Poursafi would be able to ingratiate himself with his “group” and regain the tasking to murder the former national security adviser.

:: On 28 April 2022, the CHS told Poursafi that he/she would not continue to work without being paid. Poursafi agreed to send the CHS $100 in cryptocurrency to a virtual wallet the CHS created earlier that day, to prove payment could be made.

Assistant attorney general Matthew Olsen, the justice department’s top national security official, said it was “not the first time we have uncovered Iranian plots to exact revenge against individuals on US soil and we will work tirelessly to expose and disrupt every one of these efforts”.

Labour surges to record lead in polls as Truss insists mini-budget did not cause economic turmoil
Glen Powell Reveals What Jon Hamm Did For All The ‘Young Guns’ On The Top: Gun Maverick Set
9 Of The Best Derma Rollers For Beard Growth and Health (Updated 2022)
Here’s How England’s Currency Will Change After Queen Elizabeth’s Death
A New Rihanna Era Is Coming