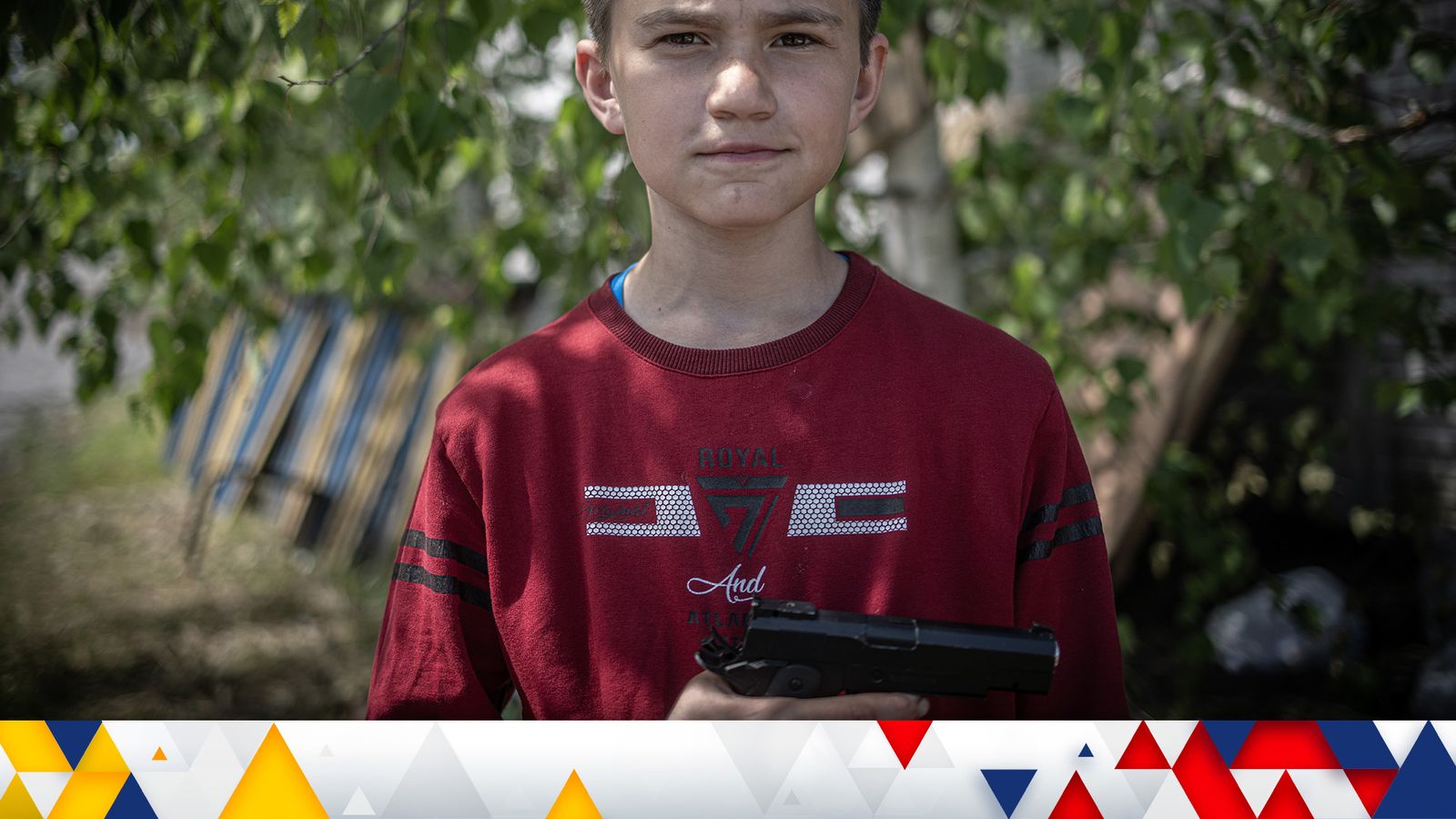 Through the dust I can see the brake lights of a van we are following, light up.

It’s another checkpoint. We’d been through six or seven already as we headed towards the frontline of the Ukrainian forces, northeast of Kharkiv, Ukraine‘s second-largest city.

I suddenly bolted upright. The checkpoint was being manned by a group of kids. Not young soldiers, I mean actual kids, with what looked like guns.

Startled, I looked more closely as the dust settled.

The Kalashnikov in one boy’s hand was a toy. His friend had a pistol, a small black toy BB gun. I’m not sure if I wanted to laugh or cry.

On one level little boys stopping and questioning soldiers and foreign media is hilarious, on the other, it is absolutely tragic.

We got out to chat to them in the baking sunshine, the sounds of artillery a few miles away constantly thundering around us.

We’re less than seven miles from Russian tanks and artillery but the boys tell us they’re out every day from 9am to 9pm protecting their village, or rather, what’s left of it after the fighting that saw the Russians pushed back.

‘They raped a woman in the school’

They lived through all of this, Nazar, their leader told me. With great bravado, he says he’s not scared anymore.

He’s got used to the fighting, the bombing, the killing, the brutality.

“They raped a woman in the school, there were a lot of children and women hiding in the basement,” he told me.

“They forced them out and moved in, and they shone torches through people’s windows at night. And every day there were tanks and cars driving back and forth.”

Think how shocking that quote actually is. Nazar is 10 years old.

Nazar confided in us that passing cars are stopped and drivers are asked to say two Ukrainian words – words that are difficult to say in Russian – to determine if they can pass.

The words are ‘Ukrazaliznitsa’ and ‘Palianitsa’. One is a Ukrainian railway company, the other a type of Ukrainian bread.

‘Next time we won’t be so lenient’

As we chatted a car trundled down the hill to their checkpoint. With the confidence of a gunslinger, Nazar flagged it down and trotted out his rehearsed, cunning, word question.

In truth, the Ukrainian soldiers do exactly the same thing.

In a respectfully obedient way, the driver repeats the two words, Nazar moves him on.

I asked him if they’d ever caught a Russian.

“Yes,” he said, deadly serious. “A driver failed the test, but we let him pass,” he quickly added.

“Next time we won’t be so lenient.”

This war is crazy.

We came across the boys while joining a search for dead Russian soldiers.

In charge of this unconventional body hunter troop is Vadym, a professional soldier in the Ukrainian military.

With him are two volunteers, Maxim and Stas, as well as a pair of brothers famed in these parts for their ability to find bodies.

So far Vadym’s team have recovered 80 Russian soldiers and 20 civilians. The brothers found 16 bodies on their own.

They only remove dead Russian soldiers from the battlefield.

The civilian dead are dealt with by the police because their place of death is a potential crime scene.

It’s a macabre job but Vadym knows it is important.

“It’s obviously important for hygiene, but also, this way we can maybe swap them for Ukrainian men, dead or alive.”

He told us by collecting bodies they’re also gathering evidence that Russian soldiers have actually been on their territory and that the Ukrainian army fought back.

The first location Vadym and his helpers search is in the village of Sorokivka.

One of the residents, 53-year-old Olha, has called to say there is a suspicious smell coming from the field across the road from her house – she worries there are dead bodies buried there.

The brothers, Yurii and Volodia, get out their spades and start digging. But they find nothing, so we move on.

The troop are dependent on local people reporting strong smells or suspicious behaviour by the Russians when they were occupying this territory.

We meet a farmer in Verhnia Rohanka, a nearby village who is convinced she knows where Vadym and his team can find more bodies.

Svitlana Borisova takes us to the edge of her farm and points to a hillside the Russians used as a base.

She says diggers were constantly working there during the occupation. It could be, she says, a mass grave.

Vadym and his team aren’t convinced but tell her they’ll check it out anyway.

He turns back to us and says the way to the Russian position is mined, and that it’s a constant problem for them. We have to go around.

Once there Vadym searches the immediate area – it’s clear of bodies.

All we can see are burnt out armoured personnel carriers, and in the trenches, a Russian military issued helmet with a large hole in it, a few pairs of boots and some used Russian meal rations packaging.

Just before we leave Vadym spots another Russian position hidden in the woods.

He carefully follows the track alongside the trees, mindful of mines.

Read more:
Inside the village where torture and destruction leaves families broken
Russia attempting to move war to ‘protracted phase’
100 Days of war: The devastating consequences of Putin’s invasion

And then he sees him, the body of a Russian soldier, and says there could be more.

I ask him if they’ll move it this evening.

“We will not do anything today, we located him, we will collect him tomorrow, he isn’t going anywhere,” he replied matter-of-factly.

The war is far from over and it could easily return here. The shelling continues unabated.

Many significant dates have come and gone, but the only date that really matters here is the one when the war is really over.