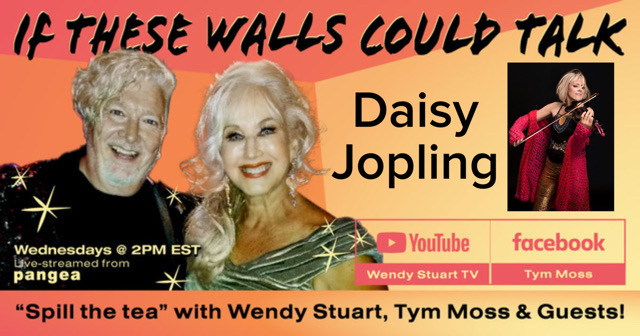 Who else but hosts Wendy Stuart and Tym Moss could “spill the tea” on their weekly show “If These Walls Could Talk” live from Pangea Restaurant on the Lower Eastside of NYC, with their unique style of honest, and emotional interviews, sharing the fascinating backstory of celebrities, entertainers, recording artists, writers and artists and bringing their audience along for a fantastic ride.

Daisy Jopling will be a featured guest on “If These Walls Could Talk” with hosts Wendy Stuart and Tym Moss on Wednesday, May 11th, 2022 at 2 PM ET live from the infamous Pangea Restaurant.

Wendy Stuart is an author, celebrity interviewer, model, filmmaker and hosts “Pandemic Cooking With Wendy,” a popular YouTube comedic cooking show born in the era of Covid-19, and TriVersity Talk, a weekly web series with featured guests discussing their lives, activism and pressing issues in the LGBTQ Community.

Tym Moss is a popular NYC singer, actor, and radio/tv host who recently starred in the hit indie film “JUNK” to critical acclaim.

Classical/rock violinist Daisy Jopling was born in London, and now lives in NY. She has toured the world with her own band, the “Daisy Jopling Band” and with the creative string trio “Triology.”  She has recorded 9 CDS, 2 with BMG RCA Victor. Her latest album “Who’s Who” was released worldwide on September 10, 2019. Produced by Felipe Souza with Tea 4 2 Productions, this album consists of original violin arrangements of great songs by The Who.

Her Solo work has included playing a concerto at the Royal Albert Hall in London at the age of 14, playing twice before 30,000 people at the opening of the Vienna Festival, touring with her band to 53 stunning concert halls in China, creating “Illuminance” on Bannerman Island, NY which aired on PBS in 2021, and performing her own “Awakening” Concert at Alice Tully Hall, Lincoln Center in 2017.

In June 2021 Daisy premiered a new show called “Transcendence”, directed by iconic Olympic Ceremony creator Daniel Flannery, based on African American author Sarah Bracey White’s memoir “Primary Lessons”. She is currently working on two concerts with her band at the Great Pyramids in Egypt, on June 17 in collaboration with the UN HCR and on November 4, 2022.

Daisy has composed music for various ensembles which has been performed in major concert halls throughout the world, and for the last 11 years she has performed her own shows “The String Pulse Experience” and “Awakening” for her Band, orchestra, solo singers, dancers, and youth choir, enhanced by custom made lighting design and projections. Both shows give opportunities to young instrumentalists, singers and dancers to perform on great stages alongside world class musicians. “Music Magic: The String Pulse Experience” documentary film by Diana C. Frank has aired on Mountain Lake PBS.

Watch Daisy Jopling on “If These Walls Could Talk” with hosts Wendy Stuart and Tym Moss on YouTube here:

Subscribe and listen to “If These Walls Could Talk” on Apple Podcasts/iTunes here: