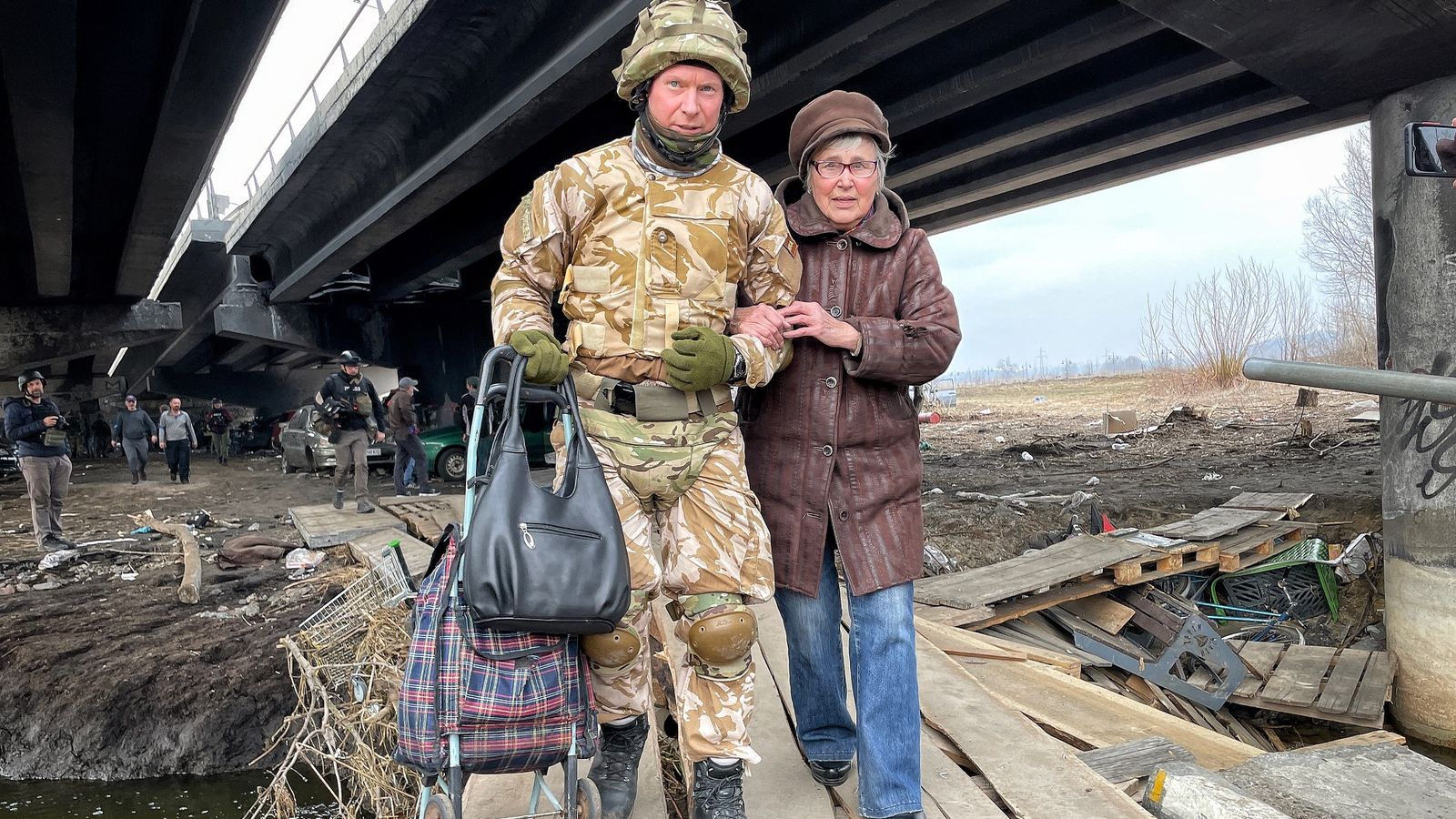 We are given strict instructions before entering the commuter town which has thwarted the Russian entry into the Ukrainian capital.

“There may be shelling. You must stay with your army guards at all the times. If there is an attack, hit the ground.”

Irpin is still far from safe. The little satellite town that’s refused to yield to Russian bombardment for more than a month is still standing – but only just.

This is the closest the Russians got to the capital; just a few kilometres from the prize the Russians so want and which they thought they’d be able to claim within days.

But this is where they fought some of their most savage street battles. The fighting and bombing went on for more than a month.

In parts of the town there’s hardly a building or home which is untouched. Huge residential apartments, homes, businesses and playgrounds are burned-out hulks and towering skeletons.

Ukrainian soldiers are still very much on red alert here, scouring the streets trying to ensure each street is empty of the Russian forces who terrorised Irpin’s residents for weeks.

They’re extremely worried about any mines or traps the Russians may have left behind as they withdrew.

What is left of much of Irpin is rubble.

What terror must have been felt by those living in these apartment blocks as shell after shell came raining in, mortar after mortar, and heavy artillery.

There are gaping holes in what were once people’s homes and lives. Underneath the high-rise blocks are cars half-packed, doors left open in panic, some with holes in their bonnets.

The place is littered with unexploded ordinance – in playgrounds, in residential forecourts, nowhere was off limits to the invaders and there was no mercy shown.

They’re still retrieving the dead. The exact number who died here will take some time to confirm, with survivors talking of burying relatives and friends in the parks and playgrounds during the month-long bombardment.

We saw dozens of body bags being loaded into vans and stretchered to waiting vehicles.

They will collect DNA and store key bodily details so that sometime relatives will be able identify those who didn’t survive the Battle for Irpin.

Ukrainian forces were not meant to be able to do this, drive back their much more powerful enemy, but they fought fantastically hard.

We see their military hardware half-submerged in the river. The bridge connecting the suburb with the capital is strewn with burnt-out vehicles and pockmarked with holes caused by mortars.

Irpin has turned out to be one of the pivotal battles of the war so far – but whatever constitutes victory here has come with huge sacrifices.

Yevhenii Yenin, the deputy minister of internal affairs, told us: “You see the quite heavy casualties that Russian troops have committed and the atrocities and use of prohibited heavy weaponry against civilian population and our national police is documenting and collecting every piece of evidence to bring them to justice.”

It’s a wonder any of these people are still alive, and the last few to be brought out showed terrible signs of suffering and pain.

One man we see being stretchered out is barefoot, his skin red raw and peeling. His feet look burnt and infected.

The first thing that comes out of his mouth is a plea for food: “Have you got an apple?” he asks us. He looks very gaunt and has a haunted look about him.

Most of the town’s infrastructure has been bombed and isn’t functioning so he and the others trapped in the town have had no electricity, little water or food for weeks, while enduring constant shelling and fighting

“When did you last eat?” we ask him. Three days ago, comes the reply.

We found a few hardy residents who’ve managed to stick it out through the very worst.

They hold and kiss my hand when they see us. One, called Sergei, tells us: “This is just terrible, all that’s happened here – it’s just barbaric – it’s a work of a human who is very sick in the head.”

This small group have got through their worst ordeal by sticking together – emblematic of the Ukrainian solidarity we’ve seen throughout the country during this war.

One woman still there tells us the explosions continued even after the Russian vow this week to de-escalate military action around Kyiv.

“We were just here,” she says, “just sitting here, and the bombs were exploding right over us.”

The near-constant attacks have seen the town virtually emptied and all those we spoke to believe the Russians will be back, maybe into Irpin again, but certainly to try once again to take the capital.

And they now have the problem of clearing all the highly dangerous munitions too – an enormous challenge, the capital’s top police officer told us.

Andrii Nebytov, the chief of Kyiv police, said: “Our specialists have calculated the longest period between shellings was about 21 seconds.” That’s a lot of unexploded ordinance.

And for the elderly we saw being stretchered out, one woman clutched her bag and kept her eyes tightly closed as she was stretchered over the rickety wooden planks across the bombed bridge out of Irpin.

The ordeal is not over yet. All their lives have been altered beyond comprehension.

Yet as we left, those remaining showed incredible defiance and fortitude, punching the air amid the destruction surrounding them.

This may be why they beat back a bigger, better-armed invading force.

25 Of The Best Men’s Sweatpants To Keep You Looking Good and Cozy (2022 Edition)
Boris Johnson calls questions over his leadership ‘political commentary’
Zelenskyy to urge G7 to do more to help war effort as Johnson to demand action on Ukrainian grain
Right to abortion overturned by US Supreme Court after nearly 50 years
‘They’re all terrified’: Patients ‘panic’ as abortion clinic prepares to close