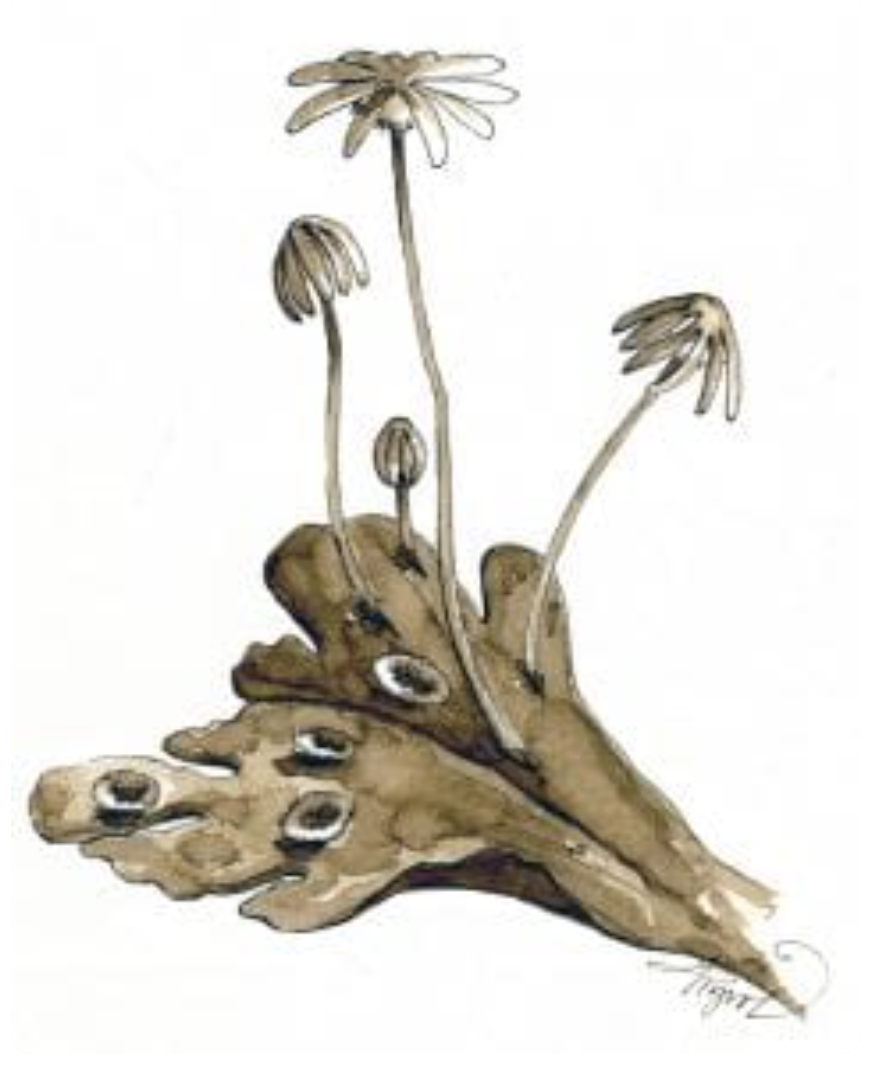 If you have allergies and want to blame your sneezes on someone or something, try sex.

520 million years ago, giant societies of single-celled organisms dared to harness nature’s wrath.  These cheeky micro-beasts had the audacity to live on seacoasts and in ponds.  Formally these risk-takers are called cyanobacteria.  We know them more colloquially as blue-green algae and pond scum.    What was the risk the pond scum faced? Periodically their coasts and ponds dried up.  And these wee beasties could not live without water.

But some of the pond scum did not take this natural disaster lying down.  1.2 billion years ago, they harvested Armageddon.  They learned to adapt to dryness.

Then these widely-scattered, arrogant scabs of green dared use their new skills to do something suicidal.  They embarked on the first in a series of nature’s great space programs.  They set forth on a crusade to populate a toxic emptiness.  They defied the natural order and left the waters behind. They turned their backs on the very womb of life—the sea. They became pioneers of a hostile, stony, doomscape we call “land.”

750 million years later, these catastrophe-tamers, these pioneering land developers, evolved multi-cellular descendants, plants. The first plants were bryophytes.    They were mosses and liverworts.  But when it came to space programs, bringing a thin and tentative coat of green to an impossible wasteland of stone was not enough. The first mosses and liverworts took things a step farther.  They brazenly defied one of nature’s most basic laws: gravity.  They lifted tiny spore-shafts to the sky and formed a green shag a breathtaking inch or two high.

An inch or two doesn’t sound like much, does it?  But that’s the human equivalent of erecting a 28-mile-high building.  And erecting these skyscrapers all over the place.  Yes, nature loves those who oppose her most.

The mosses and liverworts were tiny swatches on a vast and murderous rock face.  Tiny huddles of green trying to stay intact and thrive on a landscape scraped and hammered by disaster.  To flourish, they had to multiply.  But how? By using three of nature’s favorite sins: materialism, consumerism, and waste.

First the mosses and liverworts upgraded an old technique that their ancestors in the sea,   bacteria, had invented—the spore.  In sporulation—in spore making—you accomplish an impossibility.  You pack your genome into a tiny baseball-or-egg-shaped bundle. A bundle so small that it’s invisible to the human eye.  A bundle a mere 24,500th of an inch. Then you shoot, lift, or drop your package of genes into a water current or a breeze and take your chances.   You litter.  You spread outrageous amounts of waste.  And you do it very deliberately.  Why?

You are hoping for something that will prove crucial to life—transportation.   You are hoping to hitchhike.  And you are entering a lottery.  The more tickets you buy, the more your odds of winning.  So you gamble that two out of a billion spores will land in a corner rich in something to eat. You play the odds.  And to do it, you make far more spores than can ever find a home.

You are materialistic, consumerist,  and wasteful.  Yes, you, a single individual, crank out spores by the trillions.   You use those spores to spread out like finger tips, feeling out opportunities.  But to pull this off, you throw trillions of spores away.  And those spores will someday become part of the invisible dust that makes allergy sufferers sneeze.

So nature used materialism, consumerism, and waste to explore.  To feel out her potential.  To find unlikely possibilities.

But simply playing the odds wasn’t enough.  You early land plants reached out for something more. Something more than mere survival.  Evolution drove you to innovate. You   invented sex.  Sex is one of the biggest mysteries staring us in the face.  A mystery current science may understand far less than it thinks.  A mystery that may challenge our very notions of the way this cosmos operates. Why?

Remember how Pierre Louis de Maupertuis agreed with Aristotle that nature always takes the shortest path between two points?  But sex proves that this is radically untrue. Sex proves that nature sometimes invents not just new paths, but whole new highway systems, and those new highways can be bizarrely snarled and tangled.  So snarled and tangled that even a hedge fund accountant could not keep them straight.  If this were a thrifty cosmos, how could such flamboyant tangles possibly come to be?

What’s more, sex may force us to throw away Charles Darwin’s idea that evolution is driven by a struggle for survival.   As we will soon see, sex is not just a survival device.  It is a macromolecular dazzle.  It is an intricate ballet that exceeds your wildest dreams.  The existence of sex implies that this cosmos is not in a struggle to merely hang in there.  This cosmos is in a competition for extravagance.  A mad rush for the power to exult, to rejoice, and to do  a victory dance.

Remember, the dust of space has done the very opposite of what Lord Kelvin’s heat death predicted.  Instead of falling apart in a random whizzle, instead of tumbling into a formless fizzle of entropy, space dust comes together in galaxies.  What is the swirl of a galaxy but a victory dance over our very heads?

So is sex.  To invent sex, you, a land plant 420,000 years ago, did not take the simplest path.  You did not simply split in two and make an identical copy of yourself.  And you didn’t make kids by packing spores with the simplest, thriftiest thing, a complete packet of genes.  You didn’t just pack a spore with an everything-you-need-to-start-your-own-plant kit.  A deed that in itself would have been mind-exploding.  No, you didn’t take the shortest path.  You didn’t bank on the tried and true.  You didn’t simply keep the chains of genes you’d inherited from your ancestors, then pass them down to your kids the way that you’d gotten them.

In fact, you didn’t “reproduce.”  We speak of sex as reproduction.  But, to repeat, you didn’t reproduce.  You didn’t make carbon copies of yourself.  Instead you performed some serious genetic engineering.  Risky and expensive genetic tinkering.  You worked to create something the cosmos had never seen before.  Something utterly unique. Something totally untested and untried.  Something that could help a curious cosmos scope out her next impossibilities.  You generated one-of-a-kind offspring. You created extraordinarily different individuals. And to make those one-of-a-kinds, you reshuffled your genes.  In fact, you reshuffled your entire genome.

Charles Darwin, The Origin of Species by Means of Natural Selection: or, the Preservation of Favored Races in the Struggle for Life, Volume II, New York: Appleton, 1897.

Howard Bloom has been called the Einstein, Newton, and Freud of the 21st century by Britain’s Channel 4 TV.  One of his seven books-Global Brain–was the subject of a symposium thrown by the Office of the Secretary of State including representatives from the State Department, the Energy Department, DARPA, IBM, and MIT.  This article is a preview of his 2023 book The Case of the Sexual Cosmos: Everything You Know About Nature Is Wrong.

Gordita Chronicles: Cancelled at HBO Max; No Season Two for Coming-of-Age Comedy Series
Donald Trump says he refused to answer questions in New York investigation
Insomniac Delivers Yet Again with HARD Summer 2022
Just over half of councils have started making payments from £1.5bn pandemic fund
RHOBH Has Melissa Etheridge to Thank for Stopping Another Dinner Party From Hell