Some people simply aren’t cut out for the nine-to-five. And hey, here’s to the night shift nurses, the writers, the artists, the musicians, and the bakers, the baristas, and the medics. Without them, the rest of the world would be in dire straits. Can you imagine the mornings you just can’t if there weren’t someone there to make your coffee? If you called 911 and no one showed up? If there were no books to read or music to listen, no art for your walls?

That, of course, is our world. The mundane world where the fantastical is that which we create it to be. Some of those creations find expression in manga, and within the confines of those pages pretty much anything can happen. Despite mystical, magical settings, however, even those who spend their days with spirits and demons need roofs over their heads and need to eat, and thus need to either parlay their skills into a career or find time for a side hustle.

I’ve been backlisting a lot of manga lately as well as diving into some new stuff and the characters who populate these books have definitely made, or been sucked (or suckered), into some interesting lines of work.

The Stack Newsletter
Sign up to The Stack to receive Book Riot Comic’s best posts, picked for you.
Thank you for signing up! Keep an eye on your inbox.

Here are some of my favorites:

Watanuki sees spirits. Constantly. And it’s ruining his life. One day, he happens by a house and finds himself compelled, despite his own best intentions and the rules of polite society, to go inside. He is greeted by two strange children who introduce him to their mistress, the mysterious and beautiful Yûko, who offers Watanuki a deal: she will save him from his own abilities if he works for her in her shop of curiosities. He agrees to the deal, having no idea that working for Yûko doesn’t mean customer service with a smile and occasional dusting; it means cooking, cleaning, paranormal detective work, spirit-busting, curse breaking, magical object recovery shenanigans, with his crush Himawara (yay) and his rival Dômeki (boooooo).

Coffin Bearer to the Beast

The Witch and the Beast by Kousuke Satake

Guideau and Ashaf are hunting witches. They’re after one witch in particular, but they’re willing to take out any others with whom they cross paths along the way. In this retelling of Beauty and the Beast, the beauty and the beast are one and the same, coalesced into the form of a lovely girl with fangs, blood lust, and a curse mark in the shape of a rose on her neck. But what of her companion, the polite, soft-spoken, gentle man with the ability to work powerful magic who goes everywhere with a coffin strapped to his back? The man whose paycheck comes from a mysterious group called The Order of Magical Resonance? Why have they assigned him as Guideau’s partner? Why do they allow her such excesses? What is Ashaf’s role in her vendetta? And who, exactly, is in that coffin? 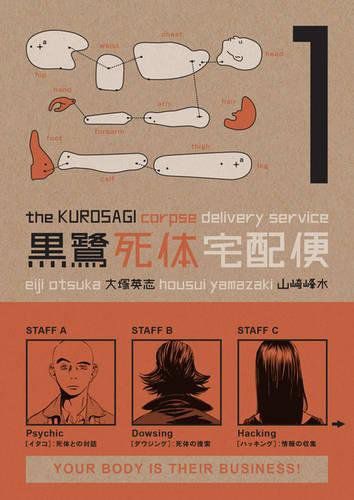 Dead? Need to be returned to your family and/or need a bit of revenge on whomever it was robbed you of your life? No problem: The Kurosagi Corpse Deliver Service can help you rest in peace.

What, exactly, is Kurosagi? It’s a group of five students from a Buddhist University, three of whom have powers that may not be useful to the everyday practitioner but are certainly useful to those seeking their final rest. Karatsu is psychic but his powers are a bit limited in that he can only hear (and may, to a certain extent be able to command) the dead. He also discovers later, in Vol. 2, that if the connection is strong enough he can see the corpse’s memories, which can assist in sorting out some very murdery confusion.

Numata is a dowser. No forked stick and wells for him though. His skull ring with a drop chain and pendulum locates something else: dead bodies. Huge boon for a team whose (ironically) life-blood is the deceased.

And then there’s Yata, the channeler. He claims to be channeling an alien intelligence through the sock puppet on his left hand. No one can confirm or deny, however, there are a couple of times in the first two volumes of Kurosagi when Yata is rendered unconscious and the puppet keeps mouthing off, so…your call, but I’m convinced.

I…may need to rewrite my resume. Even talking to corpses sounds more interesting than my last job.