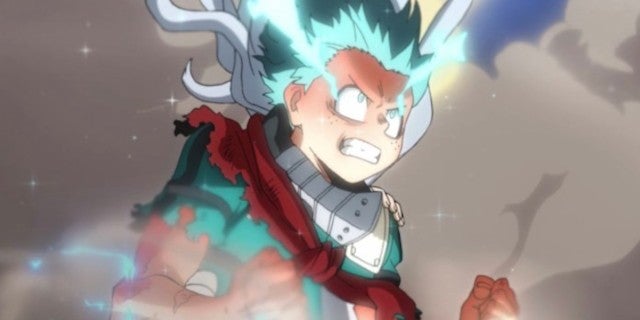 Like so many Shonen anime and manga, My Hero Academia is all about power progression. We began the series’ journey with Izuku Midoriya, an powerless boy in a world full of quirks (i.e., “superpowers”) who inherits one of the most powerful quirks in the world, from its greatest hero. However, Izuku’s One For All power has been too much for his young body to handle – but in the latest episode of My Hero Academia season 4, we finally got to see what One For All at its full power – and it was a glorious sight to behold!

This fight between Deku and Overhaul may have just been a special showcase of Izuku’s true power potential (thanks to Eri’s rewind quirk), but it also teases just how epic the future of My Hero Academia will be!

The impressive visuals seen above not only show Izuku using 100% of One For All – it also reveals just how different that quirk becomes when used at full strength. It’s probably most comparable to the other highly-anticipated power-up in recent shonen anime/manga: Goku’s Ultra Instinct technique from Dragon Ball Super. Like with UI, Deku’s full strength Ultra Instinct seems to bend the laws of physics itself; Deku’s strikes seem to be coming faster than the speed of thought, and Overhaul can’t even re-combine himself fast enough to keep up. The power of Deku’s hits are definitely on par with All Might’s United States of Smash attack – though not even All Might achieved the full power of All For One that Izuku has now tapped into.

Moments like Deku unleashing a barrage of attacks so fast the blows are delayed in impact – or an entire army of fists appearing in the sky to smack down Overhaul – hint that there’s so much more to All For One than My Hero Academia has revealed. And Deku’s freaky-looking half-transformation suggests a much deeper mythos.

Mild Manga Spoilers: Manga fans know what the next step of Izuku’s power progression entails: the reveal that, like All For One, the One For All quirk collects the quirks of all its previous users. The manga has recently set up Deku’s next big power-up, as he has begun training to selectively manifest and use those different quirk powers, in addition to strengthen his use of One For All.

My Hero Academia was created by Kohei Horikoshi and has been running in Shueisha’s Weekly Shonen Jump since July 2014. The story follows Izuku Midoriya, who lives in a world where everyone has powers, even though he was born without them. Dreaming to become a superhero anyway, he’s eventually scouted by the world’s best hero All Might and enrolls in a school for professional heroes.