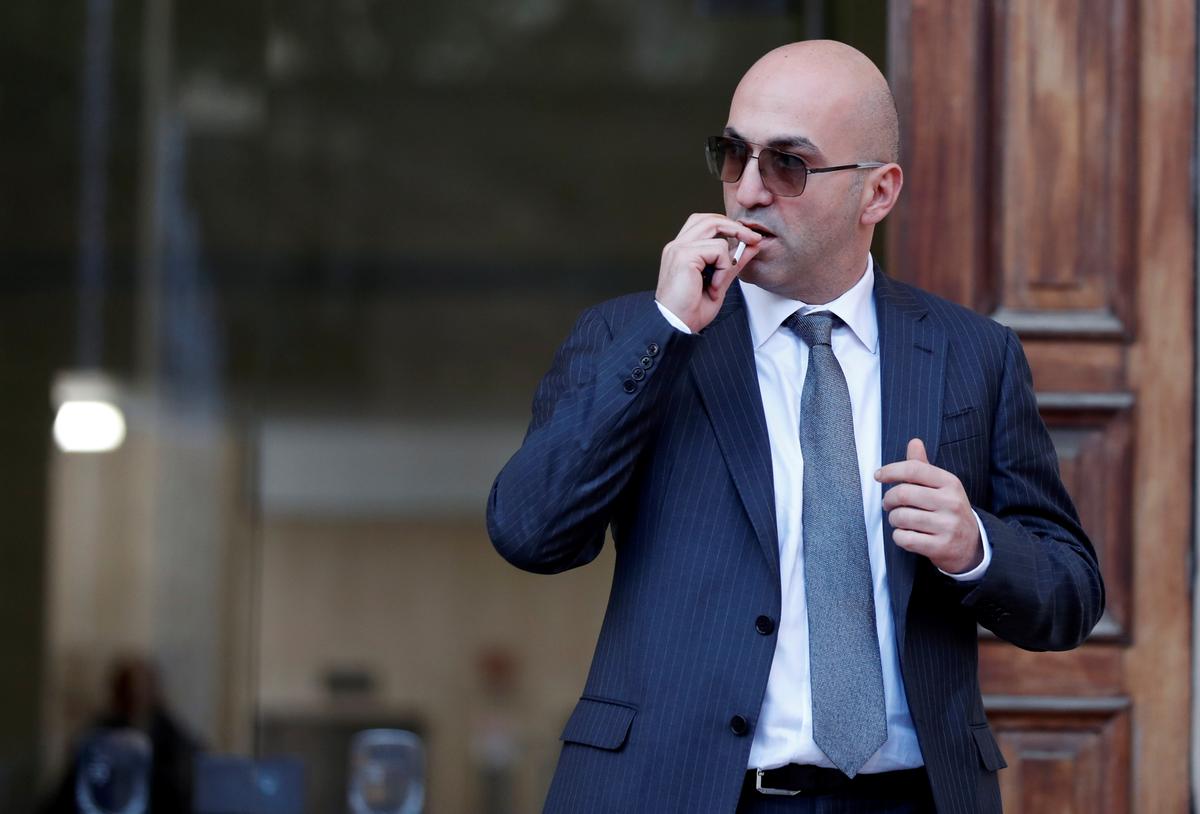 VALETTA (Reuters) – One of Malta’s wealthiest men, Yorgen Fenech, was charged in a Valletta court on Saturday with complicity to murder in the car bomb killing of anti-corruption journalist Daphne Caruana Galizia in 2017.

Maltese businessman Yorgen Fenech, who was arrested in connection with an investigation into the murder of journalist Daphne Caruana Galizia, leaves the Courts of Justice in Valletta, Malta, November 29, 2019. REUTERS/Yara Nardi

The probe into the murder of Caruana Galizia, a campaigning journalist who investigated and exposed corruption, has spawned a political crisis for the government of Prime Minister Joseph Muscat, who appeared to be close to resigning on Saturday.

Fenech pleaded not guilty to the charge of complicity to murder and to other charges related to the case, which included membership of a criminal gang and conspiracy to cause an explosion.

Official sources said Muscat was expected to make a statement announcing his resignation later in the evening or on Sunday. No official statement has been issued.

Media on the Mediterranean island had said earlier that Muscat planned to announce his resignation if charges were filed against Fenech.

Asked about this before Fenech was charged, a spokesman for the prime minister said that Muscat “has pledged various times he wants to see this case through. He will make announcements in due course”.

Fenech, 38, was taken to court under an armed police escort almost two years to the day since three men were charged with having set off the bomb that killed the journalist on Oct. 16, 2017.

The three have pleaded not guilty and are still awaiting trial.

Fenech said when he spoke to journalists on Friday that the “truth will come out”.

Immediately after Fenech was charged, the family of Caruana Galizia issued a statement saying: “We now expect the Prime Minister to leave office, and parliament, with immediate effect to allow a free and full investigation into his and (former chief of staff) Keith Schembri’s role in Daphne’s assassination.”

Muscat has been in power since 2013, having won two general elections in a row, the last in 2017. His Labour Party is expected to hold a leadership election in January.

Fenech was arrested on Nov. 20, days after another man, Melvin Theuma, was arrested in a money-laundering case and immediately told police he had been the middleman in the murder plot and offered information in return for a pardon.

The Maltese government accepted Theuma’s pardon request but later turned down another request for a pardon by Fenech.

In seeking his own pardon, Fenech said in court documents that he could give more information on the murder plot and corruption involving former chief of staff Schembri and former Tourism Minister Konrad Mizzi, among others.

Both Schembri and Mizzi resigned on Tuesday. The police arrested and questioned Schembri for two days but then released him without charge.

Caruana Galizia had reported that Schembri and Mizzi owned secret companies in Panama. She also reported that another company, called 17 Black, was being used as a vehicle to deposit 5,000 euros a day into the Panama companies. Several months after Caruana Galizia was killed, an investigation by Reuters and the Times of Malta showed that 17 Black was owned by Fenech.

There is no evidence that funds were ever transferred and Mizzi has denied any connection with 17 Black or the murder.

The links between Fenech, Mizzi and Schembri put Muscat under pressure to resign after having refused to fire Mizzi and Schmebri.

Caruana Galizia, 53, was killed by a car bomb as she drove out of her home in Bidnija, seven miles (11 km) from Valletta, just half an hour after writing a blog describing Schembri as “a crook”.

Investigators, who included members of the FBI and Europol, subsequently told a court that the bomb was set off from a yacht off Valletta harbour.

Fenech himself was arrested this month on board a different yacht as he tried to leave Malta. He formally handed over the reins of his business empire – including real estate, hospitality and casinos – to his brother just a day before.

Swedish House Mafia Perform Medley of “It Gets Better” and “Lifetime” at MTV VMAs [WATCH]
Running Touch Has the Power to Extend Summer With Latest Anthem, ‘Ceilings’
Chris Pratt Is Re-Teaming With A Tomorrow War Co-Star For A New Action Comedy
Skrillex Throws Down Ripe New ID at Moth Club in London [WATCH]
Angela Bassett And 6 Other Actors We’d Like To See Return To The Mission: Impossible Franchise