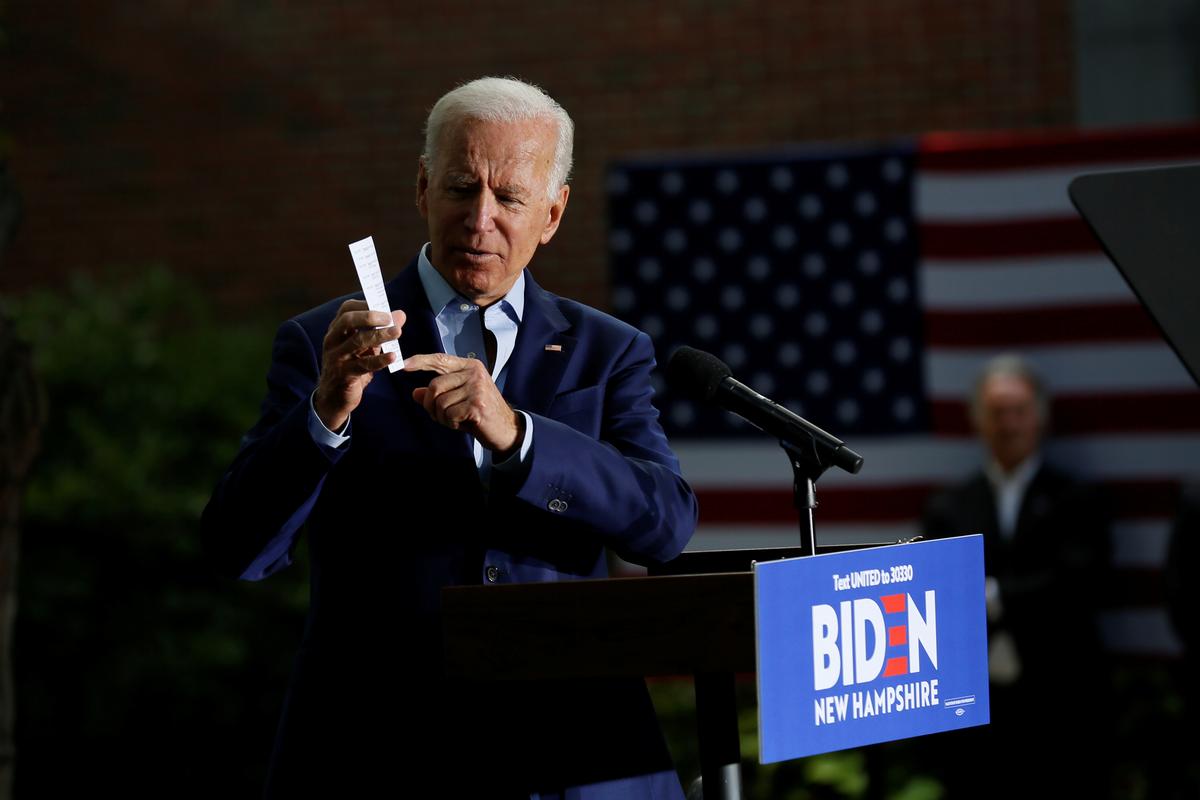 WASHINGTON (Reuters) – U.S. Democratic presidential front-runner Joe Biden was called out at a climate change forum on Wednesday for plans to attend a fundraiser hosted by the co-founder of a natural gas export firm, despite a pledge not to take fossil-fuel company money.

The exchange spotlighted the political tension stirred by efforts to lead the country off oil, coal and gas, a key focus of most plans from Democrats aspiring to take on Republican President Donald Trump in the November 2020 election.

A voter asked Biden, one of the 10 hopefuls in a seven-hour series of climate town halls on CNN, why he planned to attend this week’s fundraiser by Andrew Goldman, co-founder of Western LNG, which looks to export Canadian liquefied natural gas.

Biden said Goldman, one of his advisers when he was a U.S. senator, was not a fossil-fuel executive.

“What I was told by my staff is that he did not have any responsibility relating to the company,” Biden said. “He was not on the board, he was not involved at all in the operation of the company.”

If Goldman turned out to be involved in the operations, Biden added, “Then I will not, in any way, accept his help.”

The former vice president and all his Democratic rivals have agreed not to accept donations from fossil-fuel companies or their employees.

Goldman, who is listed among Western LNG’s leadership on its website, did not immediately respond to a phone call and email seeking comment.

Politicians of both parties say fossil fuels will be around for decades and exports of LNG, which burns cleaner than coal or oil, can also help nations such as India and China reduce deadly air pollution and offer Europe options to piped gas from Russia.

The forums pitted moderates like Biden against progressives such as Senators Bernie Sanders and Elizabeth Warren, and offered Democratic candidates a chance in a crowded presidential field to stand out on an issue increasingly important to voters.

Trump, who rejects climate science and has reversed Obama-era climate initiatives, blasted the proposals of Democratic challengers as they began showcasing them. “The Democrats’ destructive ‘environmental’ proposals will raise your energy bill and prices at the pump,” he said on Twitter.

Other Democratic candidates were split on whether or how to ban fracking of natural gas and oil, which, environmentalists say, poses risks to air and water quality.

Some environmentalists say fracking prolongs dependence on gas, slowing a transition to renewable energy like wind and solar power.

Asked whether she would ban fracking, Senator Kamala Harris said yes. The California lawmaker would start with executive action to ban it on federal lands and seek congressional legislation to ban it elsewhere, she added.

Julian Castro, the housing secretary under former President Barack Obama, said he would not immediately ban fracking but supported local governments that did.

Senator Amy Klobuchar called natural gas a “transitional fuel” and said that while she would not ban fracking, she would review in her first 100 days in office every fracking permit issued.

The candidates were also split on whether to allow any new nuclear power, with some saying its waste problem had to be dealt with first.

Concerns about climate have spiked as fires burn in the Arctic and Amazon, ice melts in Greenland and strong storms this year have flooded farms in Midwestern states.

CNN ran updates through the night on Hurricane Dorian, which closed in on the East Coast after killing 20 in the Bahamas.

Biden wants to win back workers in industrial states such as Ohio, Pennsylvania and West Virginia, who went for Trump in 2016.

His $1.7-trillion plan supports carbon capture and sequestration, a technique to bury carbon and help utilities move to cleaner energy sources, but it has been criticized by rivals as offering a middle ground.

Warren and Sanders embraced the Green New Deal, a Congressional resolution aimed at moving the country to 100 percent renewable energy in a decade, and took shots at the fossil fuel industry for contributing to climate change.

Warren said fossil fuel companies and Republican lawmakers want to shift voter attention on Big Government policies backed by some progressives, such as plastic straw bans and curbs on light bulb choice, and away from efforts to slow regulation on emissions.

Sanders said fossil fuel companies would shoulder some of the costs of his $16-trillion climate plan. “If you are in the fossil fuel industry, you’re going to be paying more in taxes, that’s for sure,” he said.

Reporting by Timothy Gardner and Valerie Volcovici and Sharon Bernstein in Los Angeles; Editing by Peter Cooney and Clarence Fernandez