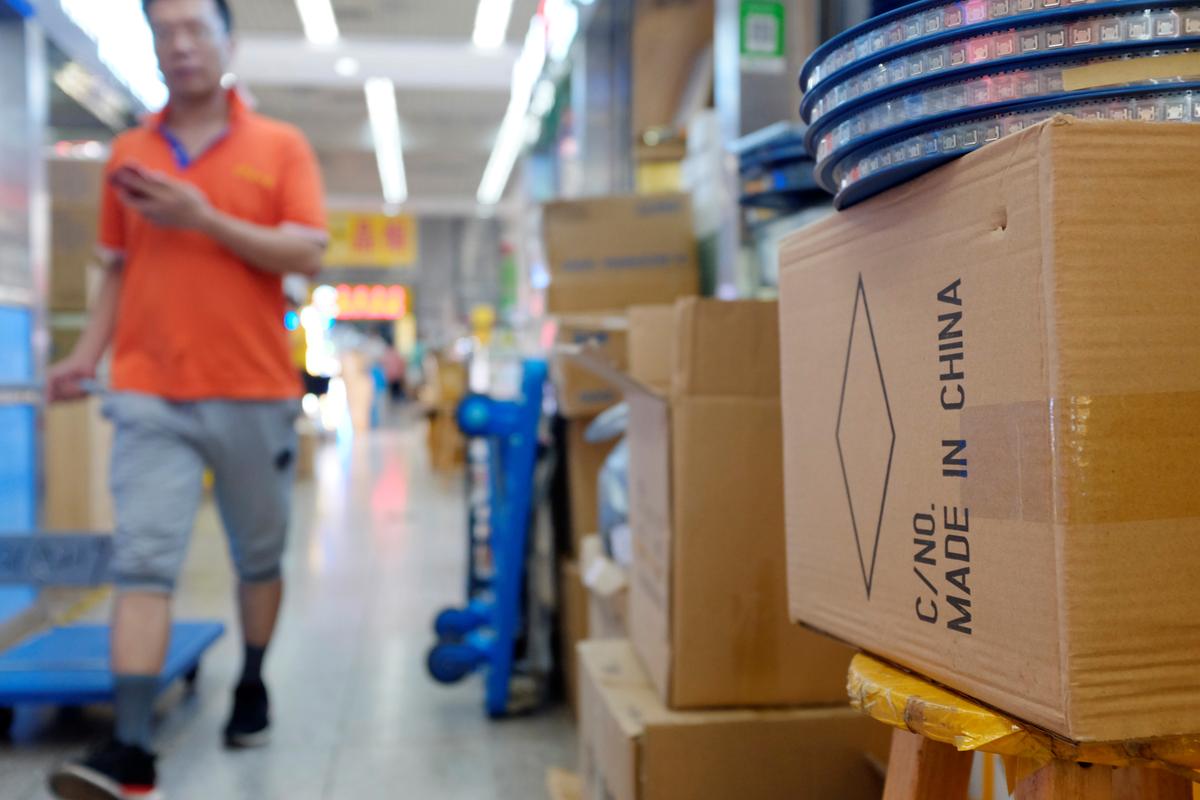 (Reuters) – U.S. President Donald Trump’s next round of tariffs on Chinese imports is scheduled to take effect starting on Sunday, escalating the trade war between the world’s two largest economies with a big hit to consumer goods.

FILE PHOTO: A “Made in China” sign is seen on a box at a stall inside an electronics mall on Huaqiangbei Commercial Street, a marketplace for Chinese producers and international wholesale buyers, in Shenzhen, Guangdong Province, China August 9, 2019. REUTERS/Jason Lee

Trump has targeted some $300 billion in annual goods imports from China for 15% tariffs in two parts, on Sept. 1 and Dec. 15. If fully imposed, virtually all Chinese imports – worth about $550 billion – would be subject to punitive U.S. tariffs imposed since July 2018.

Here is a look at U.S. tariffs and expected Chinese retaliation scheduled over the next several months.

The U.S. Customs and Border Protection agency will begin collecting tariffs for Chinese goods at 12:01 a.m. EDT (0401 GMT) on Sunday. Guidance issued on Friday indicated that there will not be a grace period for cargoes that have left China before that time, unlike that granted for goods in transit when the United States imposed a tariff increase in May.

The largest category of targeted products covers smart watches, smart speakers, Bluetooth headphones and other internet-connected devices that were spared from a prior round of tariffs, with Chinese imports estimated at $17.9 billion annually by the Consumer Technology Association.

The Trump administration is accepting public comments through Sept. 20 on a proposed Oct. 1 tariff rate increase to 30% from the 25% duty already in place on $250 billion worth of Chinese imports.

These products include $50 billion worth of largely non-consumer goods, including machinery, electronic components including semiconductors and printed circuit boards, and chemicals. But a later $200 billion list of goods included many consumer goods and building products, including furniture, vacuum cleaners, lighting fixtures, plumbing fixtures, handbags, luggage and vinyl flooring.

The second part of the 15% tariffs on Chinese goods not previously hit by U.S. duties is scheduled to go into effect on Dec. 15. This list represents the heart of the consumer technology sector, including $43 billion worth of cell phones imported from China in 2018, $37 billion worth of laptop and tablet computers and $12 billion worth of toys.

Trump delayed tariffs on these products, saying he wanted to avoid hurting Christmas season sales for Apple Inc (AAPL.O) and other companies and retailers.

The list covers about $156 billion worth of total 2018 imports from China, based on U.S. Census Bureau data, and includes a wide range of consumer goods, including plastic tableware, socks, light-emitting diode lamps, Christmas decorations and clothing.

After Trump in early August announced that he was moving ahead with tariffs on virtually all remaining Chinese imports, Beijing announced that it would impose additional 5% or 10% tariffs on a total of 5,078 product categories from the United States, representing worth about $75 billion annually.

The Chinese move, which also goes into effect in two steps on Sept. 1 and Dec. 15, targets U.S. crude oil for the first time with a 5% tariff. U.S. soybeans, already subject to a 25% Chinese tariff, will be hit with an extra 5% tariff on Sept. 1, while beef and pork from the United States will get an extra 10% tariff.

Beijing also will reinstitute a 25% tariff on U.S.-made vehicles and a 5% tariff on auto parts that it had suspended in December at a time when U.S.-China trade negotiations were gaining momentum.

China already has tariffs in place on about $110 billion worth of U.S. products, ranging from 5% to 25%, including soybeans, beef, pork seafood, vegetables, liquefied natural gas, whiskey and ethanol. Based on 2018 imports, there are only about $10 billion worth of U.S. imports untouched, with the largest category consisting of large commercial aircraft built by Boeing Co(BA.N).

The Trump administration has excluded some Chinese-made household furniture including cribs and other baby safety products and bibles and other religious texts from the Sept. 1 and Dec. 15 rounds of tariffs.

Some of the products, including internet modems and routers, were removed because they had already been hit with 25% tariffs previously, while others were taken out for safety or religious reasons. Chinese-made rosaries and religious medals, however, will still be hit with 15% tariffs on Sept. 1.

Compiled by David Lawder in Washington; Editing by Will Dunham