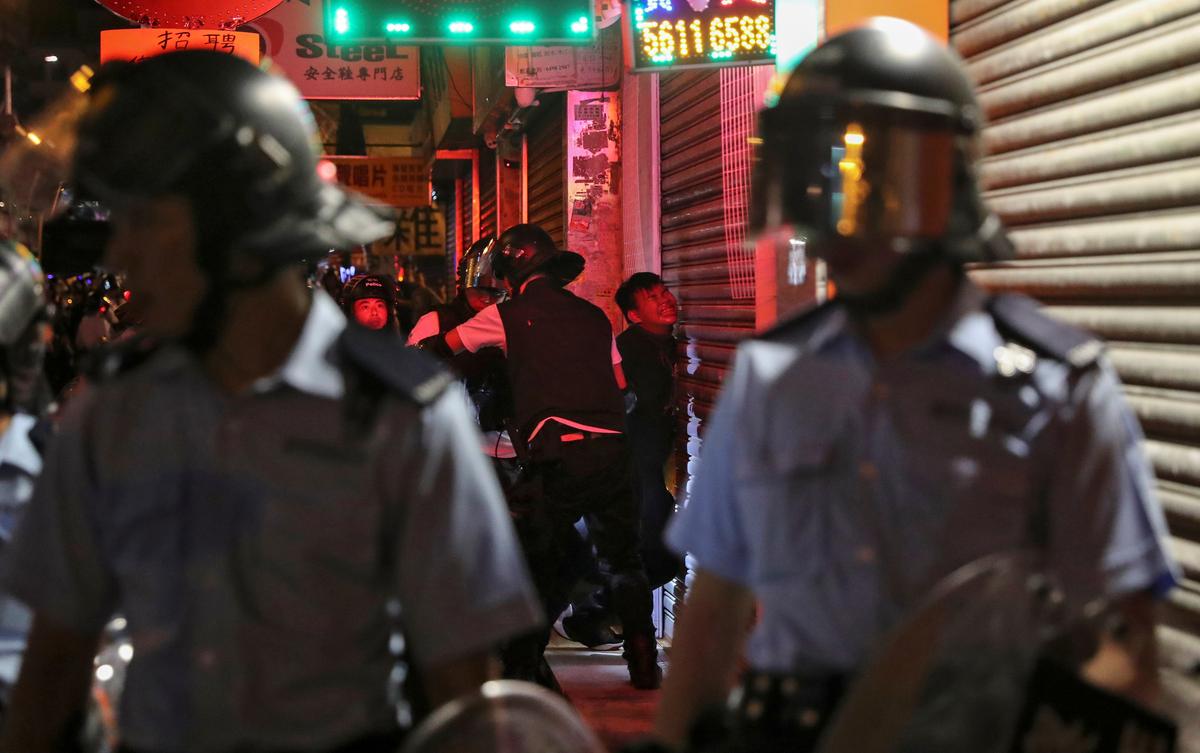 BEIJING (Reuters) – Hong Kong is a long way from having to declare emergency powers or to ask the Chinese military to intervene, a senior official with China’s parliament and pro-Beijing Hong Kong politician told Reuters, as months of protests show no sign of abating.

An injured demonstrator reacts as he is detained during a protest outside a police station in Hong Kong, China August 29, 2019. REUTERS/Danish Siddiqui

Hong Kong has been engulfed in angry and sometimes violent protests against the government since mid-June, sparked by a now-suspended extradition bill and concerns that Beijing was trying to bring the territory under greater mainland control.

Police fired water cannon and tear gas at anti-government demonstrators on Sunday, and Hong Kong leader Carrie Lam warned later that authorities would be forced to stamp down on the escalating violence.

Maria Tam, deputy director of the Chinese parliament’s Basic Law Committee, told Reuters in Beijing late on Thursday emergency legislation was not something for which Hong Kong’s government would have to ask Beijing’s permission.

“The emergency legislation is something that is left behind by the colonial British government. It’s nothing to do with the Basic Law. It’s entirely in the power of the highly autonomous region,” Tam said, referring to the mini-constitution under which Hong Kong has been ruled since the 1997 return to China.

“At the moment there are still plenty of tools. We have different articles in the police force ordinance and articles in the public order ordinance which we can still invoke to control the situation. We haven’t got to the stage when we really have to engage in enacted laws by the chief executive with the executive council to, for example, enact anti-mask or interception of internet messages. We’re quite a distance from that,” she said.

However, there may come a stage when Hong Kong has to do this, Tam said.

“I think if its come to the stage when all the other ordinances I have mentioned have failed to work, then I suppose the chief executive may have to consider it,” she said.

The Basic Law enshrines rights and freedoms – including freedom of speech, assembly and an independent judiciary – inherent in the “one country, two systems” formula that underpinned the agreement between Beijing and London.

Those freedoms remain far greater than those that exist on the mainland, where the Communist Party ultimately controls many aspects of society, including the media and the courts.

China rotated troops in its People’s Liberation Army garrison in Hong Kong on Thursday, days before protesters planned to hold a march calling for full democracy in the Asian financial hub.

Chinese state media described the troop movement as routine and Asian and Western diplomats watching PLA movements in the former British colony had been expecting it.

Tam said, under Article 14 of the Basic Law, the Hong Kong government can make a request for the Chinese military in the event of natural disaster or extreme cases of disorder.

Any request would have to go first to China’s Cabinet and then to the Guangzhou military command that is in charge of the Hong Kong garrison, she said.

However, Tam said she did not think Hong Kong had reached that stage yet. “Oh no, no, we are a long way from that.”

The central government in Beijing has repeatedly expressed support for Lam and her administration, a message Tam said she had gotten from officials in the capital.

“I’m not important enough to see President Xi, but I have seen some senior government officials consistently saying, ‘yes, (we) support Carrie Lam’,” she said.

“There’s one more question that I will ask you – who will replace her? She should carry on and put right whatever has gone wrong,” Tam said.

Pressed on whether Lam would be replaced, she said that was not likely. “I don’t see it happening.”