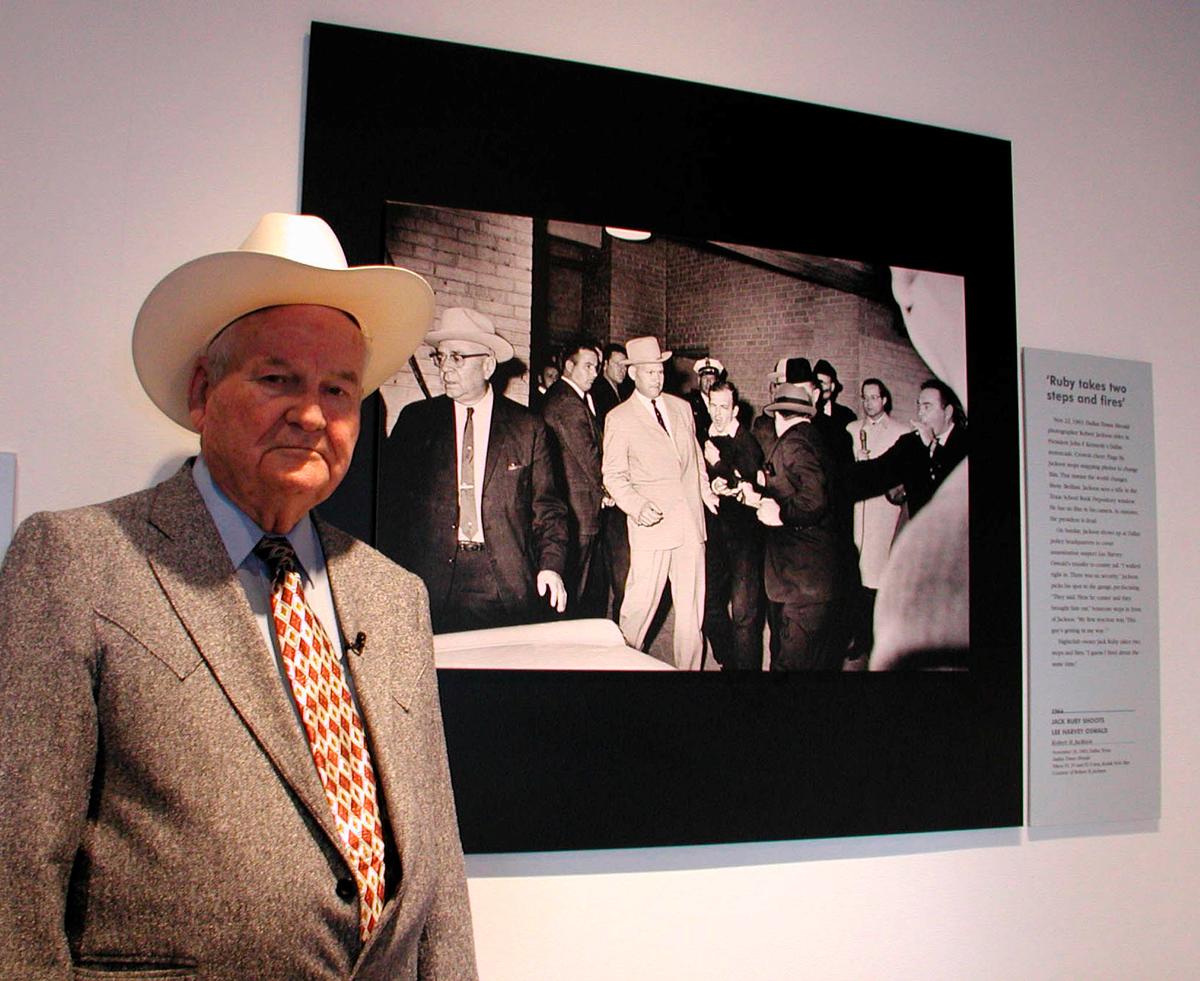 Jim Leavelle, the Dallas police detective who handcuffed himself to Lee Harvey Oswald in a vain attempt to protect him two days after Oswald had assassinated President John Kennedy, died on Thursday at age 99, his daughter said.

Leavelle, who lived in the Dallas area, died in Colorado during a vacation, Karla Leavelle said by phone. He fell earlier in the week and broke his hip, surviving a subsequent medical operation but not the recovery, she said.

Leavelle became a part of history with Oswald and Dallas nightclub owner Jack Ruby as they were all captured in a dramatic photograph snapped as Ruby fatally shot Oswald on Nov. 24, 1963.

Leavelle, who as a young sailor had survived Japan’s attack on Pearl Harbor in 1941, was a 13-year veteran of the Dallas Police Department when he was put in charge of moving Oswald, a 24-year-old former Marine, from police headquarters to the county jail as the nation grieved for Kennedy.

Leavelle had no qualms about protecting the man accused of killing the president but before Leavelle could get him to his armored transport vehicle, Ruby fatally shot Oswald. The slaying was broadcast live to stunned television viewers.

A Pulitzer Prize-winning photo by Bob Jackson of the Dallas Times Herald – snapped immediately after Ruby fired – captured the shock and drama of the moment.

Leavelle, dressed in a light colored suit and high-crowned hat, is seen arching backward with a stunned look focused on Ruby. His left hand – the one handcuffed to Oswald – is grasping the waistband of Oswald’s pants. Oswald’s face is contorted as he cringes from the gunshot while a hunched-over Ruby is seen from the back, his pistol still pointed at Oswald.

Police had received dozens of death threats against Oswald so Leavelle decided to carry two handguns that day instead of his usual one in case there was a shootout. As a further precaution, he not only handcuffed Oswald’s wrists together, he handcuffed his left wrist to Oswald’s right.

‘NOBODY’S GONNA SHOOT AT ME’

“I said, ‘Lee, if anybody shoots at you, I hope they’re as good a shot as you are,’” Leavelle told the New York Daily News in 2013. “I meant that they would hit him and not me.

“And he said, ‘Nobody’s gonna shoot at me.’ Famous last words.”

Leavelle’s mission was to guide Oswald past reporters and photographers so the world could see Oswald had not been injured in police custody. But as they went through the crowd in the basement of the police headquarters, up stepped Ruby, who was a familiar figure to many Dallas police officers. Leavelle said he spotted Ruby’s .38-caliber handgun as he aimed it at Oswald.

“I didn’t have time to do anything,” Leavelle told Reuters in a 2002 interview. “I did try to pull him (Oswald) behind me. I had him by the belt as well. I turned to him and instead of pulling him behind me, I turned his body. Instead of that bullet hitting him dead center, it hit about 4 inches to the left of the navel.”

After the shot, Leavelle used his free right hand to try to contain Ruby while other officers swarmed in. Leavelle rode in the ambulance with Oswald to Parkland Hospital – the same place Kennedy had been taken two days earlier and where Oswald died about two hours after the shooting.

The day after the Oswald killing, Leavelle transferred Ruby between facilities – this time in secret – and Ruby told him he feared someone would try to kill him, too.

In an interview with the Dallas Morning News, Leavelle said he told Ruby, “Jack, you didn’t do any favors when you shot Oswald.”

He said Ruby, who would die of cancer in 1967, replied: “All I wanted to be was a hero and it looks like I just messed things up.”

Leavelle retired in 1975 and 50 years after the Kennedy and Oswald killings, the Dallas Police Department gave him a commendation and renamed its detective of the year award for him.

He was married to Taimi Leavelle for 73 years until her death in October 2014.

Supercar-maker McLaren in talks with investors about £250m fundraising
Electric Forest announces 2023 initial lineup with ODESZA, Illenium, Zeds Dead, & more
Adam Sandler Reflects On Getting Harsh Reviews For Billy Madison And His Other Early Movies: ‘They Hate Us’
‘May the Force be with you’: PM ‘sad’ as Javid to step down at next general election
100 gecs and Skrillex finally team up on “Torture Me”