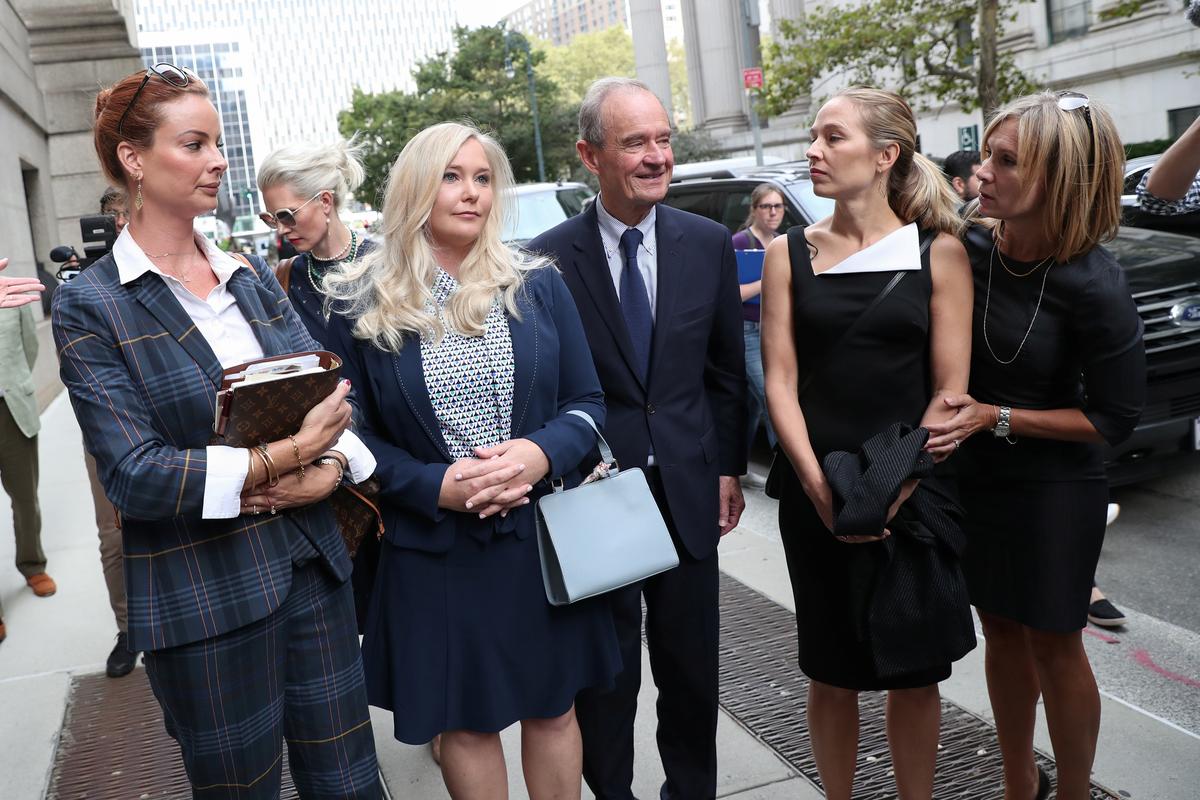 NEW YORK (Reuters) – Federal prosecutors appeared in court on Tuesday to ask a U.S. judge to dismiss their case against Jeffrey Epstein, less than three weeks after the financier killed himself while awaiting trial on sex trafficking charges, and women who say Epstein sexually abused them also appeared in the packed courtroom.

Lawyer David Boies arrives with clients Virginia Giuffre and Annie Farmer for a hearing in the criminal case against Jeffrey Epstein, who died this month in what a New York City medical examiner ruled a suicide, at Federal Court in New York, U.S., August 27, 2019. REUTERS/Shannon Stapleton

U.S. District Judge Richard Berman said these women and their lawyers would have an opportunity to address the court.

“The victims have been included in the proceeding today both because of their relevant experiences and because they should always be involved before, rather than after, the fact,” Berman said at the outset of the hearing.

Berman ordered prosecutors and defense lawyers for Epstein to appear in court after the Manhattan U.S. Attorney’s office said it wanted to dismiss the indictment against the financier in light of his jail cell death.

Epstein, who once counted U.S. President Donald Trump and former President Bill Clinton as friends, was arrested on July 6 and pleaded not guilty to federal charges of sex trafficking involving dozens of girls as young as 14.

The 66-year-old was found dead Aug. 10 in his cell at the Metropolitan Correctional Center (MCC) in Lower Manhattan. An autopsy concluded that he hanged himself.

At the hearing, Assistant U.S. Attorney Maurene Comey said the law required the dismissal of the case in light of Epstein’s death, but said the government’s investigation was ongoing.

“Dismissal of this indictment as to Jeffrey Epstein in no way prohibits or inhibits the government’s ongoing investigation into potential co-conspirators,” Comey said.

Epstein’s death has triggered investigations by the FBI, the U.S. Department of Justice’s Office of Inspector General and the U.S. Bureau of Prisons, which runs the detention facility.

Epstein’s arrest in New York came more than a decade after Epstein avoided being prosecuted on similar federal charges in Florida by striking a deal that allowed him to plead guilty to state prostitution charges.

That deal, which has been widely criticized as too lenient, resulted in Epstein serving 13 months in a county jail, which he was allowed to leave during the day on work release.

Multiple women have filed civil lawsuits against Epstein’s estate since his death, saying he abused them and seeking damages. Some have alleged the abuse continued after his plea deal and even while he was on work release from his previous jail sentence.

Just two days before his death, Epstein signed a will placing all of his property, worth more than $577 million, in a trust, according to a copy of the document seen by Reuters.

Reporting By Brendan Pierson in New York; Editing by Noeleen Walder and Will Dunham