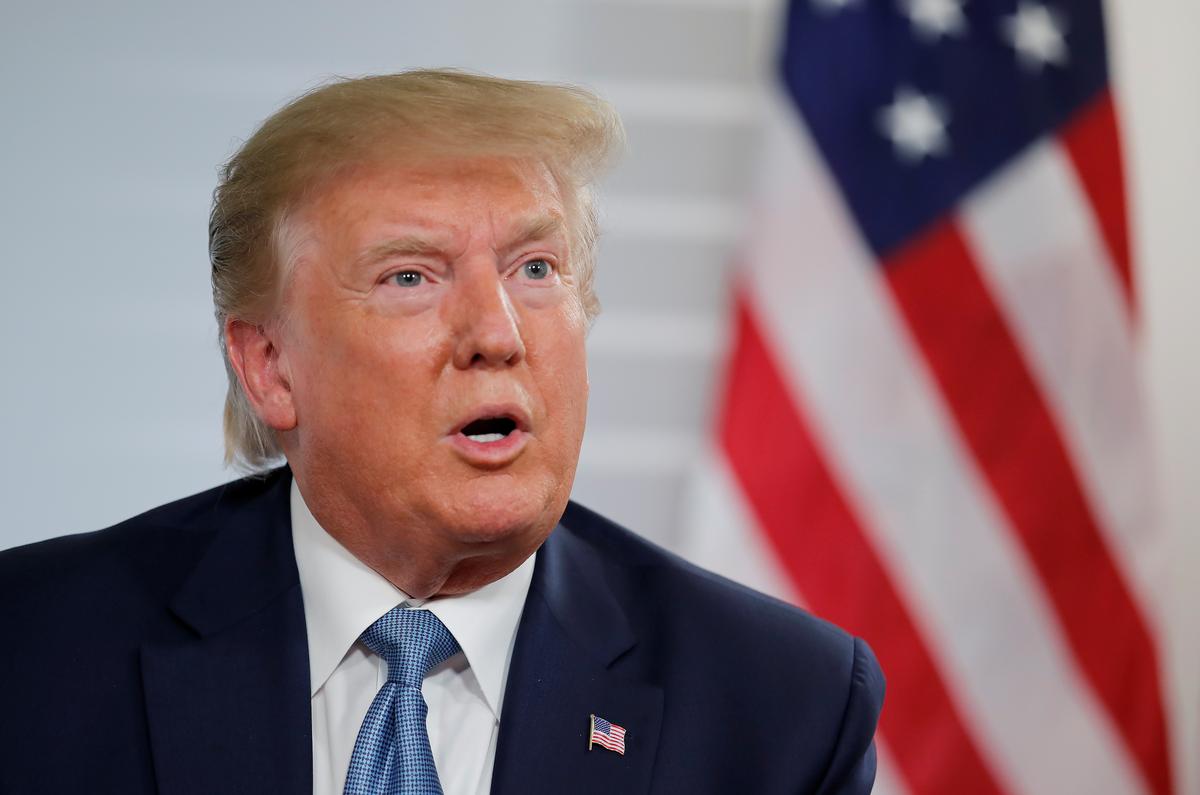 BIARRITZ, France (Reuters) – U.S. President Donald Trump insisted on Sunday that he was getting along well with leaders at a G7 summit in France, but rifts emerged with his Western allies on issues ranging from his trade war with China to Iran, North Korea and Russia.

The G7 gathering is taking place against a backdrop of worries about a global economic downturn and coincides with an era of international disunity across an array of matters.

“Before I arrived in France, the Fake and Disgusting News was saying that relations with the 6 others countries in the G-7 are very tense, and that the two days of meetings will be a disaster,” Trump wrote on Twitter shortly before meeting new British Prime Minister Boris Johnson.

“Well, we are having very good meetings, the Leaders are getting along very well, and our Country, economically, is doing great – the talk of the world!”

Tensions were quickly on show, however, as the first full day of talks between the leaders of Britain, Canada, France, Germany, Italy, Japan and the United States got underway in the Basque coast resort of Biarritz in southwest France.

Before leaving Washington Trump stepped up his tariff war with Beijing in a battle between the world’s two largest economies that has spooked financial markets, and called on U.S. companies to move out of China.

Britain’s Johnson voiced concern on Saturday about creeping protectionism and said those who support tariffs “are at risk of incurring the blame for the downturn in the global economy”. Sitting across from Trump on Sunday, he said: “We’re in favor of trade peace on the whole, and dialing it down if we can.”

Asked if he was being pressed by allies to relent in his standoff with China, Trump said: “I think they respect the trade war.”

Underlining the multilateral discord even before the summit got underway, Trump threatened the meeting’s host, saying Washington would tax French wine “like they’ve never seen before” unless Paris dropped a digital tax on U.S. technology companies.

Leaping into the fray, European Council President Donald Tusk, who takes part in the G7 discussions, warned the EU would respond “in kind” if Trump acted on his threat.

“This may be the last moment to restore our political community,” Tusk told reporters on Saturday, giving a bleak assessment of Western relations.

Looking to broaden the scope of the debate, French President Emmanuel Macron has invited several African leaders to discuss problems facing their continent, while leaders from India, Australia, Chile and Spain are due to attend a dinner on Sunday where the focus will be on the environment and other issues.

However, senior U.S. officials accused Macron of looking “to fracture the G7” by focusing on “niche issues” rather than major global concerns.

France denied this, pointing to Sunday’s initial session covering the economy, trade and security – areas that used to draw easy consensus but are now sources of great friction.

Trump up-ended last year’s G7 meeting in Canada, walking out early and disassociating himself from the final communique.

In Biarritz, Trump appeared to brush aside French efforts to mediate with Iran, saying that while he was happy for Macron to reach out to Tehran to defuse tensions he would carry on with his own initiatives.

European leaders have struggled to tamp down the brewing confrontation between Iran and the United States since Trump pulled his country out of Iran’s internationally brokered 2015 nuclear deal and reimposed sanctions on the Iranian economy.

France said G7 leaders had agreed that Macron should hold talks and pass on messages to Iran. However, Trump, who has pushed a maximum pressure policy on Iran, distanced himself from the proposal, saying he had not even discussed it.

Trump, who prizes his relationship with North Korean leader Kim Jong-un, told reporters the launches did not violate an agreement and were in line with what others were doing. Abe, standing beside him, said they breached U.N. resolutions.

The missile launches have complicated attempts to restart talks between U.S. and North Korean negotiators over the future of Pyongyang’s nuclear weapons and ballistic missile programs.

There was also disagreement in Biarritz over Trump’s calls for Russia to be readmitted to the group of advanced economies.

Russia was excluded from what used to be the G8 in 2014 after it annexed Ukraine’s Crimea and then backed an anti-Kiev rebellion in the industrial region of Donbas in eastern Ukraine.

Johnson said G7 leaders had a “lively” discussion about Russia and Trump, asked if his case for Moscow to be brought back into the fold had made headway, said it was a “work in progress”.

At the start of the day, Trump said Britain would have a major trade deal with Washington after it leaves the European Union. Asked what his advice on Brexit was for Johnson, he replied: “He needs no advice, he is the right man for the job”.

While the transatlantic rift is the most stark, there are also deep divisions within the European camp, with Johnson making his G7 debut at a time when he is struggling to persuade EU capitals to renegotiate Britain’s exit from the bloc, which Johnson has said will happen on Oct. 31 come what may.

Macron added to the internal EU strains by unexpectedly threatening on Friday to block an EU trade deal with a group of South American states over Brazil’s handling of fires that are ravaging the Amazon rainforest.

Germany and Britain both voiced deep concern about the fires, but said shooting down the ambitious Mercosur trade accord would not help save the Amazon.