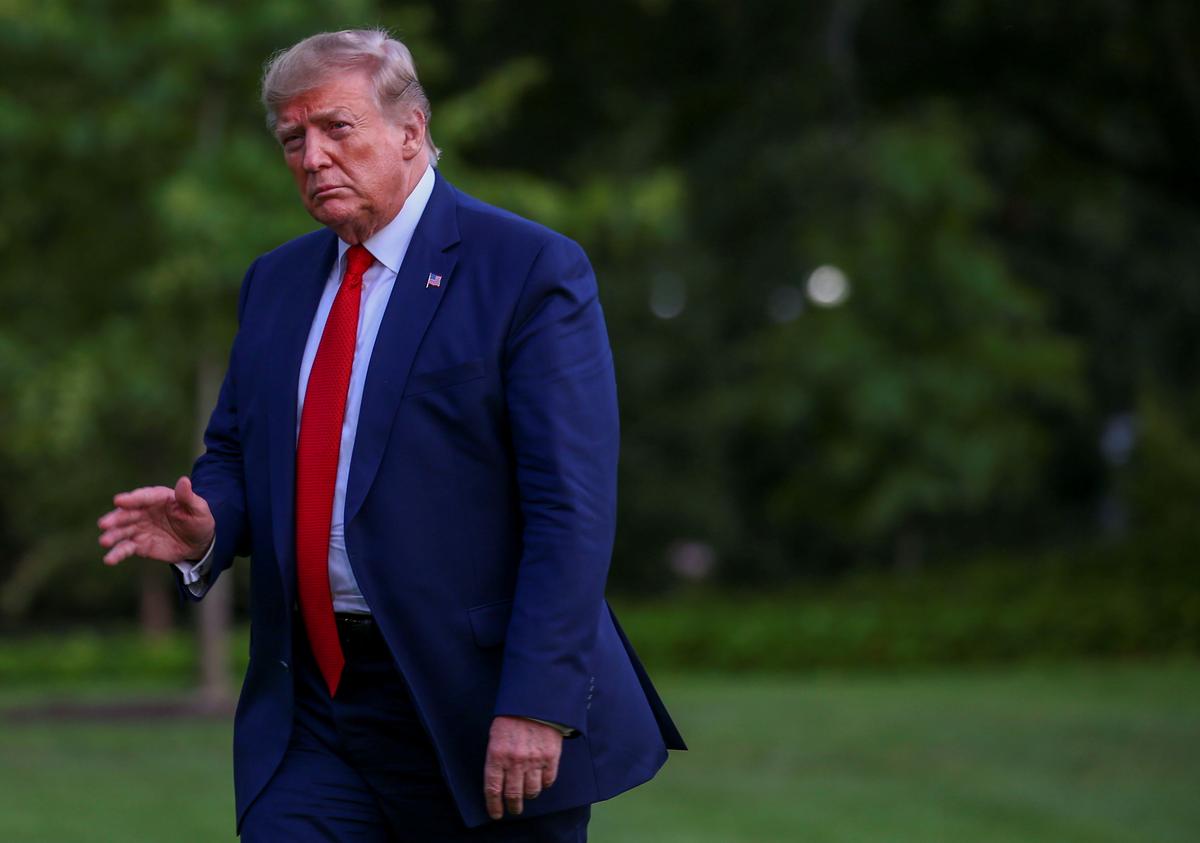 FILE PHOTO: U.S. President Donald Trump returns after travelling to the AMVETS convention in Kentucky, at the South Lawn of the White House in Washington, U.S. August 21, 2019. REUTERS/Tasos Katopodis

Throughout his 2016 campaign that brought him to power, Trump championed ethanol but also courted the oil industry. However, his latest decision to grant dozens of waivers to oil refineries infuriated farmers, a key constituency he is counting on for re-election in 2020.

The White House declined to comment on the meeting.

One proposal that was discussed and was advocated by the U.S. Department of Agriculture was rescinding seven or eight of the 31 waivers the administration has granted to refineries, according to a memo of five proposals obtained by Reuters. Sources said government agencies have agreed on four of the proposals, but Trump was yet to make a final decision.

The sticking point is a technical proposal to redistribute projected volumes that could be exempted in the future through the annual biofuel mandate from 2020 onwards. The USDA and EPA remain divided on the issue.

David Fialkov, a lobbyist for NATSO, the national association representing the travel plaza and truckstop industry, said an agreement on that proposal was key for biofuels.

The remaining proposals agreed upon are for the EPA taking steps to make infrastructure for E15, a higher ethanol blend of gasoline, more accessible; and the USDA and EPA working together to amend the Reset rule, which will be dictating new blending mandates for a slew of biofuels for the next several years and beyond. The final one is for the EPA to take action to encourage flex-fuel vehicles that can use E85, a higher ethanol blend.

U.S. regulations require refiners to blend biofuels into their gasoline or buy credits to fund those refiners who can. Small refiners can seek exemptions, but Trump’s EPA has granted waivers to refineries owned by the likes of Exxon Mobil Corp (XOM.N), Chevron Corp (CVX.N) and billionaire Carl Icahn.

U.S. farmers have already been suffering due to a slump in crop prices and exports shrinking following Trump’s trade war with China. On Wednesday, biofuel industry groups and farm-state lawmakers complained to the White House about the refinery waivers.

The backlash from agricultural and biofuel trade groups has been particularly strong in Iowa, the largest producer of corn and ethanol, and a swing state won twice by former Democrat President Barack Obama but which voted for Trump in 2016.

Democratic presidential hopefuls have spent a lot of time in Iowa because it holds an early nominating contest, and they have used the refinery issue as a cudgel. Senator Amy Klobuchar of Minnesota said that if elected, she would block pending refinery waiver applications and look to reverse any approved. She said, at a maximum, only a few should be approved.

Farmers and biofuel producers have complained that Trump is favoring the oil industry at their expense. Over the past month, several biofuel plants announced shutdowns or production cutbacks, including the largest U.S. ethanol producer POET.

On Thursday, American GreenFuels, owned by Kolmar Americas, said it was slashing output by 50% in the fourth quarter, citing pain from waivers and a biodiesel tax credit that expired and has not been renewed.

“Enough is enough,” Raf Aviner, president of Kolmar Americas said in a statement. “We cannot justify buying more feedstock under these market conditions.”

FILE PHOTO: Corn is loaded into a truck at a farm in Tiskilwa, Illinois, U.S., July 6, 2018. REUTERS/Daniel Acker/File Photo

Refiners and some academics dispute the contention that waivers have decimated ethanol demand, and the industry and its allies have fought to keep the waivers intact.

On Thursday, North America’s Building Trades Unions (NABTU) sent a letter to Trump supporting waivers, saying they significantly reduced costs for refineries and alleviated a threat to thousands of jobs.

Renewable fuel credits for 2019 traded at 16.5 cents apiece throughout the session on Thursday, up from 14.75 cents each on Wednesday, traders said. The credits have steadily climbed from trading at 11 cents apiece two weeks ago as refiners sought to actively buy in the market.

132 Black Friday Sales You Can Still Shop: Kate Spade, SKIMS & More
Halle Berry Celebrates Her James Bond Anniversary With That Iconic Bikini Scene
16 Of The Best Lounge Pants For Men To Really Kick Back In 2022
How Mariah Carey Celebrates Christmas With Her Twins Moroccan & Monroe
Two more Tory MPs announce they are stepping down at next election