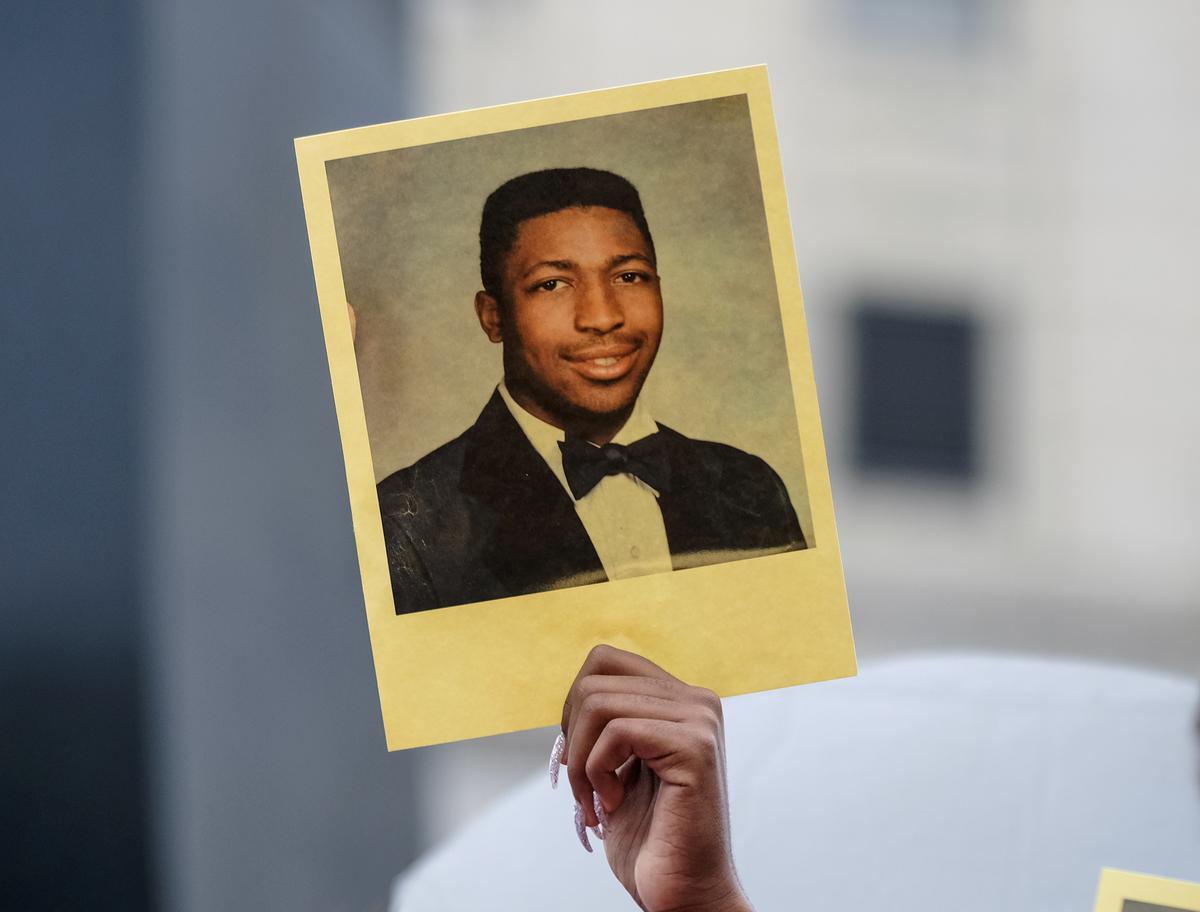 NEW YORK (Reuters) – Hassan Johnson was getting his head shaved on Monday at the same barber shop Eric Garner used to visit.

FILE PHOTO: New York protesters march and rally on the fifth anniversary of the death of Eric Garner, a day after federal prosecutors announce their decision not to prosecute NYPD officer Daniel Pantaleo or other officers for charges related to his death, in New York, U.S., July 17, 2019. REUTERS/Michael A. McCoy/File Photo

Five years after Garner’s death in a confrontation with police in the Tompkinsville neighborhood of Staten Island, relations between law enforcement and the community have improved nominally at best, Johnson said, if only because they could not grow much worse.

“It’s us against the enemy,” Johnson, an actor, said from the barber’s chair, characterizing what he perceived to be the prevailing police attitude. “It’s like a military approach in the community. Things got so out of hand and it was so uneven and disrespectful that something had to happen.”

The case surrounding Garner’s death came to an official close on Monday, when the New York Police Department fired former officer Daniel Pantaleo, 34, who had placed Garner in a fatal chokehold five years ago and escaped criminal prosecution.

But Tompkinsville is still living with the aftermath of a case that brought it national attention and fueled the Black Lives Matter movement to denounce repeated cases of police deadly force against unarmed black men across the United States.

Police relations have long been strained, said Wumi Afruyi, a sales associate from Staten Island who works at a beauty supply store on the street where Garner was killed.

Staten Island, the least populous of the five boroughs that make up New York City, is more white and conservative than the rest of the city. Some 75 percent of Staten Island’s population is white according to the U.S. Census, compared with 43 percent of the city as a whole.

Connected to Manhattan by a free ferry and to Brooklyn by a $19 toll bridge, the island has a more suburban feel than the heart of New York, and it is wealthier with a median household income of $76,244 compared with $57,782 across the city.

However, the Tompkinsville neighborhood where Garner lived and died suffers from the blight more common to slum areas of New York City.

On July 17, 2014, police entered the area around Tompkinsville Park to crack down on “quality of life” crimes. Neighbors had been avoiding the park, complaining of drug dealing, drug usage and people getting drunk, urinating and passing out on the benches, Police Commissioner James O’Neill said.

In this world stood Garner, an imposing figure of 6-foot-3 and 395 pounds (1.91 meters and 180 kg) and a hustler of “loosey” cigarettes, which are sold individually and untaxed.

Garner was across the street from the park, on a sidewalk, when he refused to show his identification to police and then resisted arrest, O’Neill said. He died after Pantaleo wrestled him to the ground and used a prohibited chokehold, with Garner’s dying words a repetition of “I can’t breathe.”

Shirone Ford, a barber who used to cut Garner’s hair, said police need to reevaluate the people they hire.

“There are a lot of officers that are young and we could be their father, but the way they approach us, it’s like we’re some little kid,” Ford said.

Afruyi, for one, fears police retribution.

“They’re like siblings, like brothers,” she said. “They’ll be more aggressive because they’re angry that their brother got in trouble for doing something bad.”

Many schoolchildren among 268 killed in Indonesia earthquake
Filipino-American Artist Yung Rizzo Seeks To Collaborate With More EDM-Based Talent
How Did Andrew Garfield And Bridgerton’s Phoebe Dynevor Actually Meet?
An Offer You Can’t Refuse, The Godfather 4K And Digital Is Half Off For Black Friday
‘We have it in writing from FIFA’: Rainbow hats and flags allowed at Wales’ World Cup game against Iran