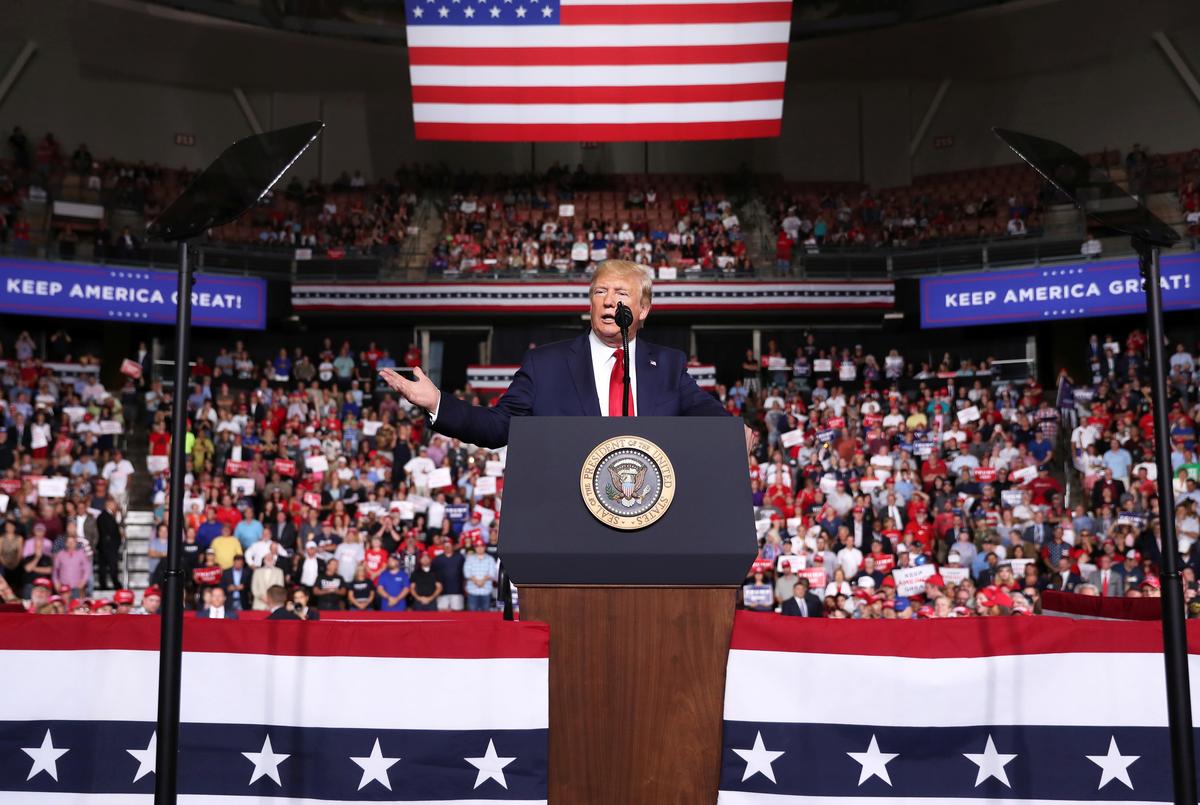 MANCHESTER, N.H. (Reuters) – President Donald Trump on Thursday defended his handling of the U.S. economy and trade war with China as recession fears have suddenly cast doubt on his central claim for re-election – that he has made the economy great again.

Trump spoke at a packed campaign rally in Manchester, New Hampshire, a state that was pivotal to his winning the Republican presidential nominating race in 2016 and could prove important to his re-election chances in 2020.

Trump said his trade pressure tactics are working on China, even though the two sides remain far apart on a deal with a resumption in talks scheduled for September.

He said Chinese currency devaluations are “going to hurt them badly” over time and force Beijing to make concessions.

“They’re going to make a deal,” he said.

Many analysts believe the tariffs he has imposed on Chinese products are responsible for a slowing of the U.S. economy because the increased costs are being passed on to American consumers. But Trump disagreed.

“They’re eating the tariffs, by the way,” Trump said of the Chinese. “There’s no price increase.”

Warning of policies that would lead to tax increases if a Democratic candidate beats him in November 2020, Trump said the markets would have crashed if he had not won in 2016 and would do so again if he were defeated in 2020.

Trump lashed out at the leading Democratic contenders, saying he believed former Vice President Joe Biden might “limp across” the finish line and win the nomination fight.

Some U.S. Treasury yields have hit record lows and the stock market has plunged in recent days over fears of a recession, undermining Trump’s claim that he has resuscitated the economy.

On a working vacation at his golf club in Bedminster, New Jersey, Trump has blamed the economic woes on Federal Reserve Chairman Jerome Powell’s hesitation to cut interest rates.

One view inside the White House is that the media is also to blame for overplaying the possibility of a downturn, which could end up encouraging consumers to slow spending, a source familiar with the discussions said.

The U.S. economy is the most closely watched indicator of a presidential election. Economic woes prompted voters to turn against Republican incumbent George H.W. Bush in the 1992 election won by Democrat Bill Clinton, and doomed Republican Senator John McCain’s campaign in 2008 against Democrat Barack Obama.

Trump said in an interview with New Hampshire conservative radio talk show host Jack Heath that “we had a couple of bad days” on the stock market, but “we’re going to have some good days because we had to take on China.”

Weightless
The Holiday 2 Rumors Are Everywhere Today, But Kate Winslet And Director Nancy Meyers Say Not So Fast
The Winchesters Season 1 Episode 7 Review: Reflections
Army may be deployed to ease possible strike disruption over Christmas
Ghostbusters: Afterlife’s Sequel Has Found A Director, And They Know The Supernatural Franchise Well