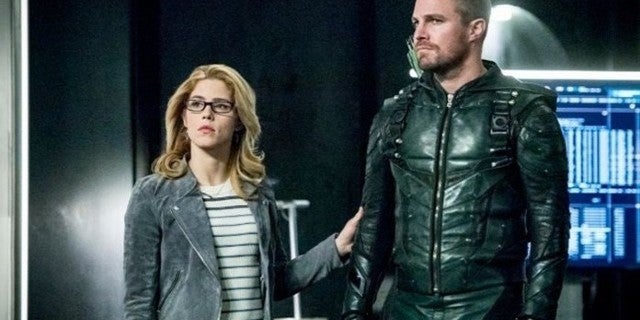 Arrow‘s eighth season is almost here, and Oliver Queen is about to fight to protect the world one more time. What remains to be seen is if Emily Bett Rickards has taken her last bow or is there still happiness at the end of the road for Olicity. Is a happy ending even possible after the series of gut punches that have ruled Team Arrow’s lives since the initial moments of the series?

TVLine recently discovered a deleted scene from Season 7 that seems to hint that there might be a future with Felicity and our hero despite the looming Crisis. (Click here to watch the deleted scene!) The clip comes from episode 13 of the season and focuses on the changing family dynamics between Oliver, Felicity and his son William. Felicity is trying to get Oliver to realize just how hard its been for William to have been separated from his father while he was in prison.

The archer always has a solution, in his own charming fashion, and presses forward. Neither of them realizes that their lives were set to be changed again by some news about their family expanding at the end of the episode either. There are the Smoaks scheming in the background and the kind of compromise that made Bett Rickards and Amell work well on the show in spades during the clip.

This deleted scene comes from bonus features in Arrow: The Complete Seventh Season, which hits stores Tuesday, Aug. 20 on DVD and Blu-ray. If anyone wants to catch up on the crossovers before Crisis on Infinite Earths touches down, the Blu-ray also contains all of the previous ones to help fans get up to speed.

The CW’s flagship Arrowverse series will have its eyes fixed towards setting up the major “Crisis on Infinite Earths” crossover event during the final run. “Crisis” will seismically change the Arrowverse, going forward. As fans will remember, Arrow season 7 neatly laid out the end of the series. That previous flash-forward storyline comes decades after the “Crisis” hits. Long after Oliver Queen’s death, his children had to pick up the fight for good in a dystopian future.

Season 7’s conclusion saw Roy Harper unite with Oliver’s son, daughter, and Felicity, along with the remaining members of Team Arrow and the Black Canarys. All together, they dealt a crushing blow against the A.I. Archer system Oliver’s wife had created. Felicity passed the crime-fighting responsibilities to her kids’ generation, before meeting The Monitor to be reunited with Oliver in a place beyond the mortal world.

It seems fans may not have seen the last of Emily Bett Rickards with Team Arrow. Arrow‘s 8th and final season will begin airing this fall on The CW.

The crew is breaking it down for Episode 57 and we’ve got news headed into the weekend. We’re talking the new G.I. Joe Snake Eyes movie, a potential major Powers of X twist, and Robocop reboot updates. We’ve got all that and we’re bringing back the Rant & Rave section – all in today’s episode of #ComicBookNation! Make sure to subscribe now to never miss an episode!

MCM is the Latest Label to Reimagine Crocs + More Fashion News
Book Riot’s Deals of the Day for June 30, 2022
Gordon Brown says Britain is ‘at war with America over Ireland’
Our Favourite July Birthstone Jewellery
More than 100 live animals found in women’s luggage