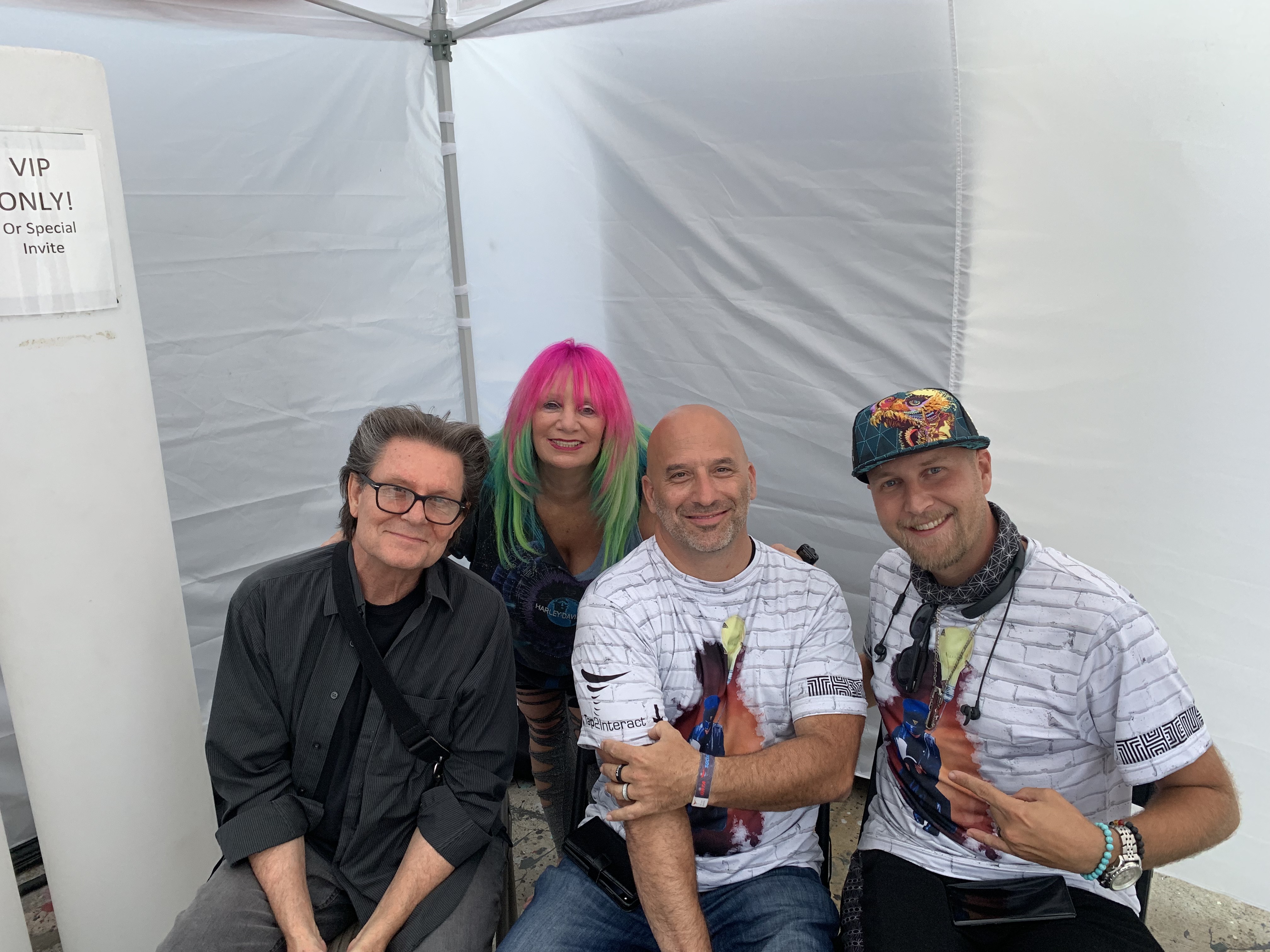 Scott Page, enterprising visionary architect of Think EXP: has essentially taken T-shirt concert merchandise to the next level with the help of Rich Stein and Matthew Olson from Tap2Interact.

In keeping within the very quintessence of Think:EXP which “strives to bridge the gap between the human spirit and technological innovation with one of a kind live immersive concert experiences”. Think:EXP is on a mission to create these immersive experiences by reimagining the classics and is currently venturing “Beyond the Wall” with the music of Pink Floyd.

Scott Page, saxophonist and rhythm guitarist of Pink Floyd, Supertramp and Toto has mobilized  a super group with the best musicians on the planet  including Stephen Perkins, the drummer of Jane’s Addiction, Kenny Olson, founder of Kid Rock’s Twisted Brown Trucker Band,  Norwood Fisher from Fishbone, and sometimes Tony Franklin from The Firm, Whitesnake, Jimmy Page and David Gilmour. Together they have created their own unique and edgy sound and have set out to revolutionize the music industry. “Beyond the Wall is a futuristic exploration of Pink Floyd’s Journey into the realm of virtual reality and artistic evolutions via a shared VR experience with mind blowing visuals, customized 360 projections and surround sound.”

Taking the experience a step further into the future, and stretching the boundaries of technological innovation to the limit, Think has orchestrated the production of artist designed, interactive clothing that with the tap of a phone can lead you to a website, augmented reality, or pretty much anywhere. The shirts will sell for $60.00 and are made from recycled, plastic water bottles. A portion of the money will go to benefit the creation of the Watts Music Conservatory.

In an attempt to grasp the concept of this revelation I spoke with Scott Page, Rich Stein and Matthew Olson from Tap2Interact, and artist Jimmy Ovadia.

Scott, can you give us a heads up about these talking T-Shirts?

Scott: Part of what we are doing with Think is really all about using innovative technologies and really stretching the limit. One of the things we are working on now is interactive clothing. We just got our first sample batches that we are starting to sell, with the help of Rich Stein from Tap2Interact. There is actually built into our clothing these chips that allow us to connect and use the shirts as a piece of Technology by using your phone and tapping the shirt, it launches an interactive experience through the web.

Rich, how does this happen?

Rich: We have a company called, “Digitize Your Brand”, and we create interactive merchandise. So basically, it’s the next generation of merchandise that literally interacts with mobile phones and devices. It’s called NFC and it’s part of android and iPhone, which means essentially it’s like Apple Pay. It’s the backbone of mobile payment throughout the world which is why it is actually in these phones. But it does more than just payment. It does what’s called read merchandise and that’s what we are doing with it. We basically have a supply chain of merchandise, everything from print to signage that literally has the opportunity for you to tap your phone and launch an experience on your phone. So this interactive shirt is one of the first shirts made with the technology and we can launch anything from a website to augmented reality to commerce. Actually built-in to it is the ability to buy on the spot integration with Apple Pay. There is something kind of 3.0 about it. But the biggest news here really is not only is it an android, but Apple has been going huge on this the last two years. They have updated the phones to include this technology. So with the newest phone starting last year you don’t even need an app to interact with it. You just tap the logo or the item where the chip is on your phone and it launches that experience.

Scott: So again staying with the Think concept of the latest technology we are trying to innovate in every area and have teamed up with these guys. Tonight, we are basically showing the very first version of this here at our show at Wisdome LA where we are doing our 360 dome show. We are breaking new ground with Matt who is making it all happen.

Matt: Another cool thing about the shirts is that it’s made from reprieved fiber which is all recycled materials, mostly recycled bottles pulled out of the ocean. Along with every garment that is purchased we plant 10 trees as well. Also as with Think:EXP we are contributing to the Watts Conservatory of Music.

Scott: The Watts Conservatory of Music is something we are doing with Flea from The Red Hot Chili Peppers and Norwood and Perkins. We are taking a conscious capitalistic approach so that we build giving into everything we do. It creates a win, win scenario.

Matt, how much are the shirts?

Matt: The shirts are $60.00 plus shipping. We want to make them affordable so we can get the technology out.  Because you take the shirt home with you it allows you to stay connected with that experience. It allows the experience to continue on after the event.

Matt you were telling me last night about the fact that you will eventually be able to do some really wild things with the shirt for example making the picture on the shirt come to life.

What exactly is augmented reality?

Scott: Augmented Reality allows you to use your phone to enhance the experience by pointing it at specific augmented reality triggers to create a whole experience on your phone. It can be anything from information, or having a picture come alive.

Scott, you’ve actually had an artist create the picture on the shirt?

Scott: In Pink Floyd there was always what I called the fifth member which was a guy name Storm Thorgenson. Storm was the artist who did all of the conceptual art on the album covers, all the art work. He was the conceptual one. Jimmy Ovadia is our artist. He paints at every one of our shows. We are going to have a whole series of a limited edition merchandise. The whole idea is we want to build intelligence in everything we have. That’s one of the exciting things that is happening right now. You are seeing intelligence in cement, in pipes, and glasses, in shirts, in merchandise, so this is that new era.  Everyone is carrying these phones around allowing them to be connected to the merchandise. Jimmy is incredible. All of the art that he’s been creating he has been donating. At the end of the night we’ve been auctioning it all off and raising funds for the organization.

Jimmy please tell us about your art work.

Jimmy: I get to paint “Live” with Think Experience and it’s been an incredible honor to be doing this at every show. The shirts look absolutely amazing and you guys should definitely keep your eye out for some limited edition ones that will probably be about two hundred dollars and signed by everyone in the band.

I understand that the design on the shirt might change?

Scott: We are going to do a whole series of art pieces. That’s a big part of our plan, combining art, visuals, music, and all those things together in this new immersive entertainment space. The goal here is Think is going to be the most technologically advanced, live and online immersive entertainment company on the planet. It happens by bringing people in like Rich, and the art people all together. Remember we want to use technology not to be the thing that drives everything but really the technology is the thing that captures the human essence of what we’re doing.

Can people buy these online if they aren’t at one of the concerts?

Scott:  You will be able to go to thinkexp.co. There will be a buy button right there, or if you see someone wearing our shirts, tap your phone on it and you’ll connect right up to it and can buy it right there. But please ask before you tap.  The whole idea about augmented reality is it is probably one of the hottest spaces out there right now. Everyone carries their phones with them everywhere, which gives them the ability to  augment the real world.

Rich: The beauty of it is it’s in the cloud which is a term these days that is used quite a bit. It means we can change what the information is. So now whether it’s the day after or six months, or 12 months after, we can change a promotion, we can change the content. It’s really amazing the ability to make it a really alive, interactive piece of apparel that lives and breathes and can do some really cool stuff. Of course, in the art and music and the entertainment world it’s all about fandom. How can you connect and be authentic with the content in the context of what you want to be delivering? This is going to take that to another level.

Doubts over my premiership as PM are ‘settled’, Johnson says
Alabama Barker Shares Photo Holding Dad Travis Barker’s Hand Amid His Hospitalization
Biden looking for ‘solutions’ after Supreme Court’s abortion ruling as protests continue
Rezz Announces She Is Starting Her Own Label
Apparently Avatar 2’s Trailer Made A Notable Change So It Could Play In Front Of Kids At Lightyear Showings