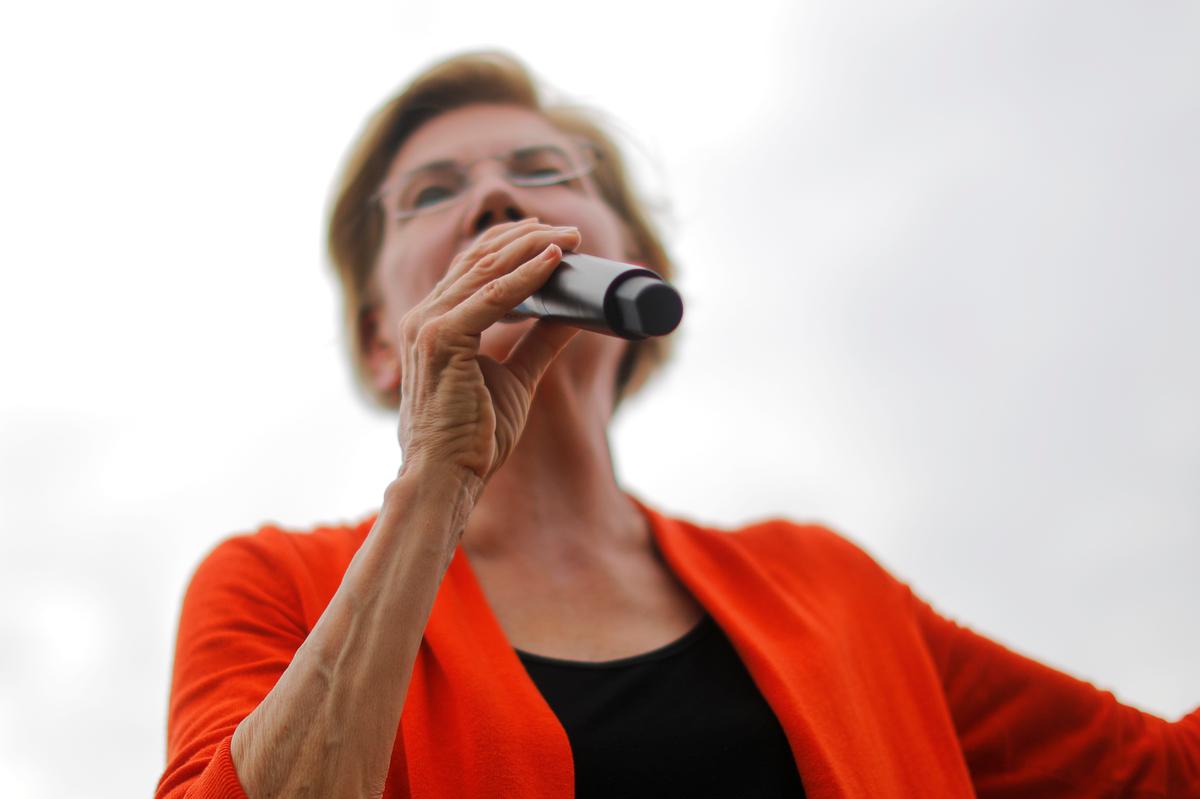 Friends and liberal standard bearers of the Democratic Party, the two U.S. senators espouse many of the same causes: universal healthcare, taking on Wall Street, and raising the minimum wage.

Both candidates also have robust, well-funded campaigns and strong claims on this state, which holds the first Democratic presidential nominating contest in February.

That has some voters preoccupied with a question: is Iowa, or the presidential field in general, big enough for two popular progressives running head-to-head, or is there a risk that they could split the vote on the left, to the benefit of a centrist such as former vice president Joe Biden?

“Of course it concerns me,” said Sherma Mather, 50, who was visiting the fair from Richmond, Virginia, to support Warren.

Although the field is unsettled with the Iowa caucuses still nearly six months away, early opinion polls have consistently shown Biden in the lead with either Sanders, of Vermont, or Warren, of Massachusetts, in second place.

The fact that combining support for Sanders and Warren would eclipse Biden’s buttresses progressives’ arguments that the party is lurching leftward.

“They are a 1-2 punch and they are having a gravitational pull on the rest of the field,” said Adam Green, co-founder of the Progressive Change Campaign Committee (PCCC), an advocacy group that supports Warren.

Sanders and Warren insist they are friends, not rivals. And they have so far stayed true to their pledge not to turn on each other for political gain, as moderate candidates warn that their reformist agenda will only ensure Trump’s re-election.

In Iowa, which has an outsized role in picking presidential nominees, there are signs that Warren could be chipping away at some of Sanders’ long-held support on the left.

A recent poll by Monmouth University of Iowa Democrats showed Warren in second place with 21% of the vote, trailing Biden by just seven percentage points. Sanders had dropped to 9% in the state, according to the poll.

Advisers to Sanders on Monday said the survey was flawed on the grounds his supporters were undersampled.

Nationally, the news is better for him, with Sanders and Warren basically neck-and-neck behind Biden. The most recent Reuters/Ipsos poll had Sanders in second place by a wide margin over Warren.

Sanders “can make a case for himself at this juncture how he is a unique candidate without denigrating others,” said his campaign manager Faiz Shakir.

Watching Sanders at the state fair on Sunday, Alexis Johnson, 33, of Des Moines, said beating Trump was her top priority as a voter and expressed little enthusiasm for Warren.

Misty Cornelius, 38, of Des Moines, was sporting a Sanders tattoo on her chest at the fair, but she said Warren might be a better choice against Trump.

“Bernie has been stigmatized,” she said. “Warren is a fresh face.”

Despite sharing many of the same talking points, the two are noticeably different on the stump.

Drawing upon her working-class Oklahoma roots, Warren casts herself as a sort of prairie populist, while Sanders talks more in terms of leading a “movement.”

There is evidence too that the two do not chase the same kind of voters.

Patrick Murray, the polling director at Monmouth, said while “there is ideological overlap,” Warren’s recent surge has her pulling support away from virtually every other candidate, not just Sanders.

“Sanders has core support that will not desert him,” Murray said. That grassroots support led Sanders in 2016 to battle the eventual nominee Hillary Clinton to the very end of the primaries.

But Warren may have appeal to women, particularly college-educated women, that Sanders cannot match. “I am sick and tired of men running the world,” said Janet Caldwell, 66, of Washington, Iowa.

Sanders’ campaign in fact views Biden as their primary challenge, because both are courting the kind of working-class voters and union voters who gravitated to Trump in 2016.

Biden did little in Iowa to boost his status as a front-runner. He made several gaffes, including when he said in a speech that “poor kids are just as bright and just as talented as white kids” – a sensitive slip-up in an election where race is in the spotlight.

Also waiting in the wings in Iowa is U.S. Senator Kamala Harris of California, who ranked third in the state in the Monmouth poll with 11% support.

After Iowa, Sanders and Warren will clash in New Hampshire, which holds the first Democratic primary later in February.

Many Warren voters, like Mather of Richmond, fear Sanders will not yield if his fellow senator continues to gain momentum.

Right now, the foremost concern of the two campaigns is not to siphon support off the other. Instead, they both want to convince large swaths of voters that a progressive Democrat can win the election against Trump, the PCCC’s Green said.

“Many ‘electability voters’ are parked in Joe Biden’s column,” Green said, “but that perception is changing.”

Ghostbusters: Afterlife’s Sequel Has Found A Director, And They Know The Supernatural Franchise Well
7 Easy, Elegant Looks For A Stylish Winter: Trust Luca Faloni To Deliver Italian Elan, Whatever The Weather
Trump firm guilty of defrauding tax authorities for more than 15 years
Celebrity lawyer and former Trump foe gets 14 more years in prison
The Best 2023 Page-A-Day Calendars and Desk Calendars for Readers