It’s worn by punk-rock legends and hip hop royalty. It’s been paraded down runways for some of the hottest designers on the planet. It’s the subject of ongoing collaborations with cooler-than-cool streetwear brands like WTAPS, Supreme and Opening Ceremony. And all of this from a sneaker that demands no more than a modest £60 in order to take up residence on your shoe rack.

Vans’s Old Skool is fashion footwear democratised. Highly attainable, but still a stalwart of the achingly cool. It’s an affordable canvas shoe that can be confidently paraded around Fashion Week without fear of retribution, yet probably wouldn’t raise any eyebrows if worn to your grandma’s 90th birthday party.

Here we examine the ins and outs of the world’s most fashion-friendly skate shoe, including how it came about, how to wear it and the key variations to get your hands on.

The Story Of The Vans Old Skool

Like all good sneakers, the Old Skool started life as a doodle in a designer’s notepad. Vans co-founder Paul Van Doren sketched a basic, canvas skate shoe with a waffle sole and white leather “jazz stripe” to the side. It was the first shoe to bear this curvy insignia, something which would go on to define the brand.

The sneaker debuted in 1977 but its name came later. Back then, the shoe was referred to simply as “Style 36”, and quickly became a big hit among the rebellious skate community of 1970s California and beyond. By the time the 1980s came around, Old Skool fanatics had begun to make use of the shoe’s panelled construction to customise their footwear. Personalised versions of the sneaker, featuring bright colours and scribbled sketches became a common sight on the streets as the Old Skool’s popularity continued to grow.

As time progressed, the intended use as a skateboarding shoe became less significant. At its core, the Old Skool was one of the things that made Vans a respected skatewear brand, but one that was becoming evermore absorbed into the mainstream.

It became heavily associated with music as well as action sports, particularly rock, and later hip hop. Fashion-savvy rappers including A$AP Rocky and Kanye West are two of the style’s greatest musical proponents, while fellow lyricist Tyler The Creator has put his name to several collaborative pairs via his GOLF imprint. The Old Skool’s fashion-icon status has been a long time in the making, but it really began to crystalise in the 2010s. The shoe became a firm favourite of fashion insiders, peaking when haute-streetwear visionary Virgil Abloh used the style as footwear for OFF-WHITE’s SS17 show.

The Vans Old Skool is the world’s most accessible piece of fashion footwear. A simple, suede and canvas kick that has skaters salivating and style columnists clamouring at its mere mention. It’s subtle, timeless and has remained relatively unchanged over the 40-plus years it’s been in production. And why should it be altered? The Old Skool is a certifiable classic. A rudimentary skate shoe that has managed to infiltrate the world of high fashion, stopping off at the feet of all the most influential celebrities along the way.

That’s before we even get onto the Old Skool’s versatility. This is a true example of a piece of does-it-all footwear. Jeans, check. Tailored trousers, check. Joggers, check. Shorts, check. It would take an active effort to make this sneaker look bad, which is why it’s a must have for any stylish man.

How To Wear The Vans Old Skool

The Old Skool is restrained, clean and simple. These are qualities that make it straightforward to style. Even so, this is a casual shoe at heart, so it makes sense to wear it that way.

One thing to keep in mind is colour – the Old Skool comes in a varied palette and subdued options like black, white and blue are always going to be easier to style than neon pink or rainbow checkerboard. That said, if you have chosen to go for a more vibrant variation, just make sure nothing else in your outfit is competing for the spotlight. In other words, keep things simple. A classic jeans and T-shirt combo is impossible to get wrong when paired with Old Skools. Switch the legwear out for shorts in the summer and team with white tube socks for a touch of skatewear style.

If you have to dress them up, pair black Old Skools with a white tee, tucked into grey, cropped, dress trousers. Layer with an unstructured navy blazer or an overshirt and you’re good to go. Vans’s checkerboard print has become every bit as emblematic of the brand as its original sidestripe logo. A staple of the punk rock and emo scenes of the 2000s, this iconic pattern has now made its way onto the Old Skool, too, and the results speak for themselves. The classic black and white version is the Old Skool in its purest form. It was one of three colourways on offer when Vans first launched the shoe back in 1977. As far as versatility and timelessness goes, this one takes some beating. If you’re looking to inject a splash of personality into an outfit without going full-blown technicolour dreamcoat, a pair of crimson kicks is a reliable place to start. If Santa spent his downtime carving up empty pools in Anaheim, these are definitely the sneakers he’d be rocking. White and sneakers go together like…whatever the lyrics are from that song in Grease. Clean crisp and the perfect accompaniment to a pair of slim-fit, selvedge denim jeans and your favourite T-shirt. 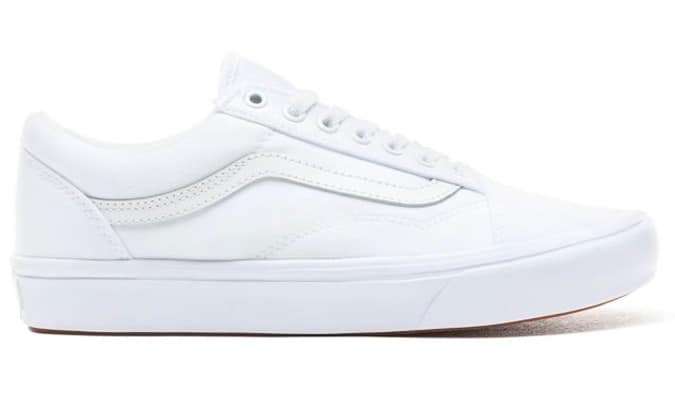 It takes a real man to wear pink. Or so say all the men who make a really big deal about wearing pink. In actual fact, anyone can rock this summer-friendly, pastel shade. Just keep the rest of your outfit simple and stripped back, and you shouldn’t have a problem incorporating a pair of these bad boys into your warm-weather rotation. Looking like your feet are aflame is hardly good dressing 101. However, these fiery Old Skools somehow manage to make it work. These are kicks with some serious attitude and should be styled accordingly. Pair with slim-fit black jeans, band tee and a black biker jacket for best results. The Yacht Club Old Skool is perhaps the most colourful Vans shoe money can buy. And that’s saying something. A patchwork quilt of a sneaker, it features bold, block-coloured panels, stitched together to create a bright, characterful kick, perfect for tackling the summer in style. The great thing about yellow is that, in addition to lifting spirits, it’s actually surprisingly easy to style. Team these yellow Old Skools with cuffed, navy chinos and white socks, a Breton top and tie it all together with a military green overshirt. 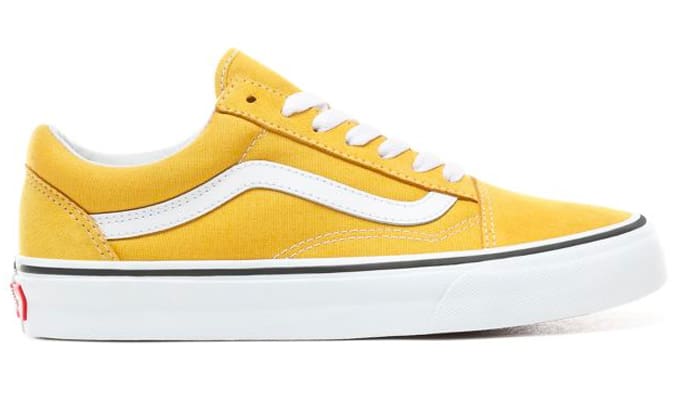 If you’re more concerned with popping ollies than attending fashion week, the Old Skool Pro may be the sneaker you’re looking for. An upgraded version of the classic Old Skool, it features a cushioned footbed, reinforced panels in key areas of wear and a Duracap rubber toe bumber.