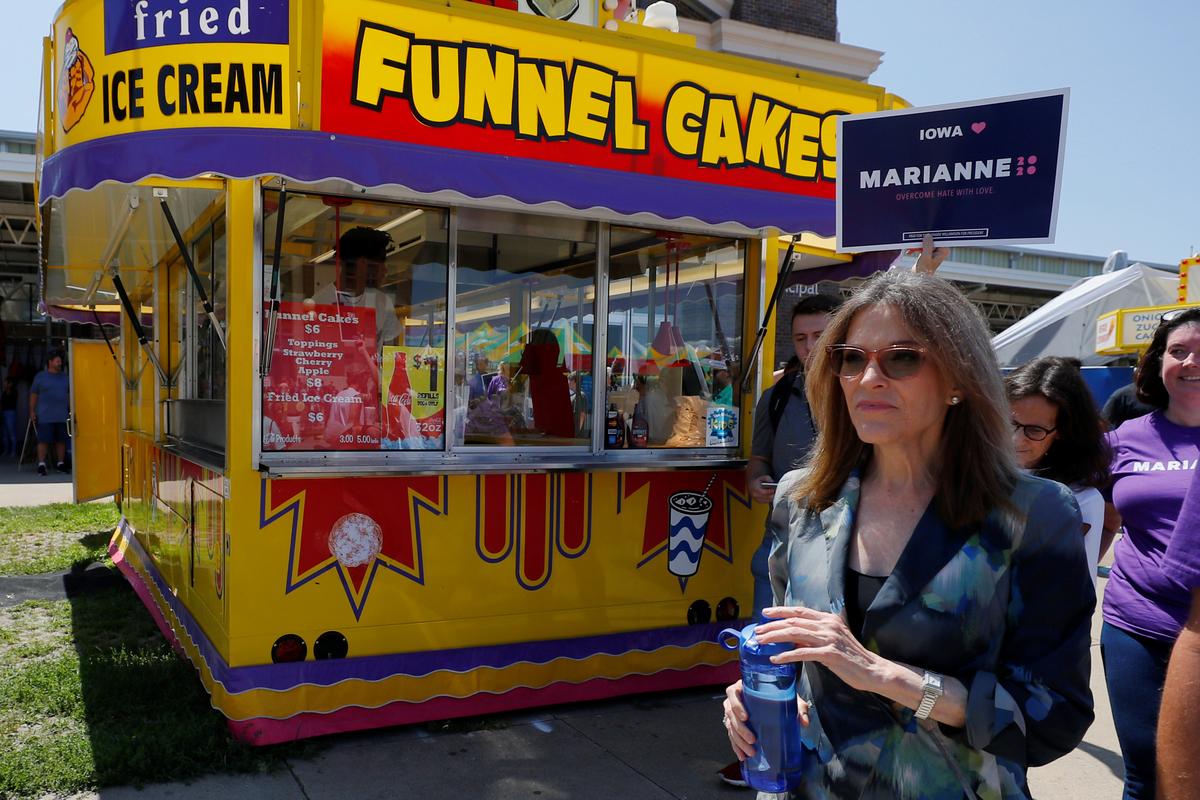 The self-help guru and bestselling author appeared on stage at the fair, telling Democratic voters why she should be the party’s nominee to take on Republican Donald Trump in next year’s general election.

She told the crowd it was time “to slam it and kick ass.”

It was an unlikely scene for 2020’s perhaps most unlikely candidate, dressed not as a politician but as an anti-establishment outsider in Southern California chic: a watercolor-splashed jacket, jeans, and snakeskin sandals standing amid the classic cars, tractors, and meats-on-a-stick.

Williamson didn’t talk like a politician either. She spoke of “energies” and the nation’s “deep goodness.” Americans, she said, “were born of a rambunctious spirit” and added that the presidential election requires “a rising of consciousness.”

“Democracy is radical,” she said. “And love is radical.”

If elected president, she would not operate a “top-down leadership paradigm” but instead would “co-create” with the public.

In the first Democratic debate in Miami in June, Williamson was treated like something of a punchline, portrayed on social media as a kooky mystic.

But during the second debate in Detroit, she spoke eloquently about the water crisis in Flint, Michigan, talking about disadvantaged communities of color and the need for environmental justice. Her words struck a chord, and she became most-searched candidate on the internet.

So far, that interest has not translated into widespread support, however. She sits below 1% in public opinion polls, and is in danger of not qualifying for the next debate in September.

At the fair, Williamson suggested “powerful forces” were trying to keep her off the debate stage.

She attracted a small but boisterous crowd. They hooted and hollered during her speech, as she decried the U.S. “military industrial complex” and its “amoral” economy.

“I really like that she kinds of speaks the truth,” said Grant Fay, 19, a student from Ames, Iowa.

“She’s campaigning for peace and love,” said Leanne Otting, 58, of West Des Moines, who was holding up a sign for Williamson during her remarks. “She’s a force to be reckoned with.”

It was a day for outsider candidates at the fair, a traditional stopping point for Democratic presidential contenders. Next February’s Iowa caucuses will be the first nominating contest as the party seeks a nominee to run against Trump.

Entrepreneur Andrew Yang spoke before Williamson. “This is how you start a revolution,” he told the crowd.

It was Trump, a businessman and real estate developer who had never held public office, who paved the way four years ago for insurgent and inexperienced candidates such as Williamson and Yang, and their resumes resonated with some in the crowd.

“I think the people who should actually be in office are normal working people,” said Joel Wacker, 21, of Ames.

And Williamson sometimes talked in the same blunt, populist manner as Trump.

“Right now, the political establishment looks at the American voter like you’re a poker chip,” she said. “You’re not a poker chip. You are the power.”

“She is the light,” he said. “There is too much darkness in America right now, based on hate and fear. She’s the opposite of all that.”