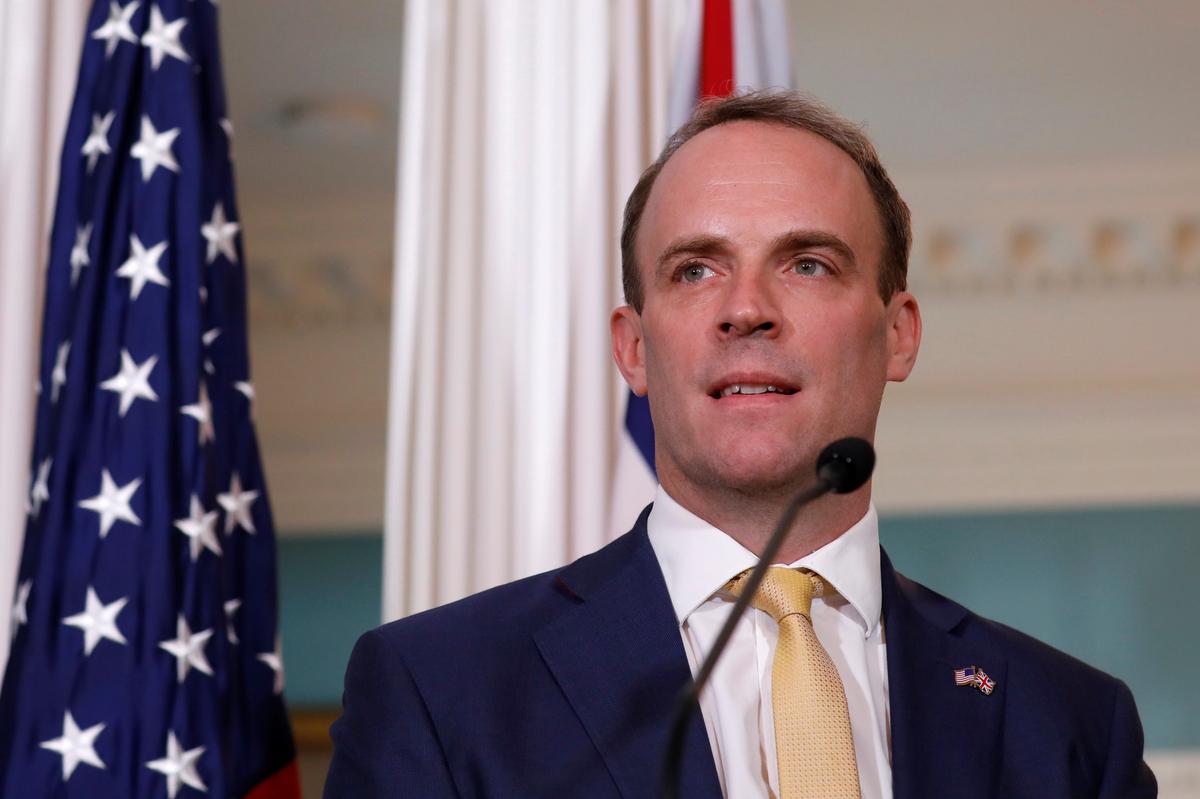 MEXICO CITY (Reuters) – Britain’s foreign minister on Thursday pressed the European Union to amend the terms of Britain’s EU withdrawal agreement, saying Brussels would have to take responsibility for a no-deal Brexit if it does not compromise.

In an interview with Reuters during a visit to Mexico City, Foreign Secretary Dominic Raab said the British government wanted to leave the European Union with a deal, but would do so without one if EU negotiators did not alter their stance.

“If the position from the EU is that the withdrawal agreement can’t be changed – whether it’s add-ons or subtractions – full stop, which is their position today, then let’s face it, they will be taking the decision to see the UK leave on no-deal terms, and that’s a responsibility they will have to bear,” Raab said.

The European Union has said the withdrawal agreement negotiated by the previous British administration will not be re-opened, but the new government under Prime Minister Boris Johnson wants a contentious so-called Irish “backstop” scrapped.

A provision put forward by Brussels, the backstop aims to keep the border between the Republic of Ireland and British-ruled Northern Ireland open, and would oblige Britain to obey some EU rules if no alternative arrangement can be agreed.

Its opponents in Britain’s ruling Conservative Party view the measure as an unacceptable loss of U.K. sovereignty.

Raab said “the backstop, certainly in its current form, is undemocratic and it’s something that will have to be removed.”

The obvious alternative, Raab said, was to move toward an “operational backstop” that ensured that “any checks that are done wouldn’t be at the border” but could be managed with “technology and goodwill and operational cooperation.”

The minister took a firm line when asked if there were any circumstances under which Britain would countenance not leaving the European Union on Oct. 31, as is currently foreseen.

“The prime minister’s been very clear, we’ll leave at the end of October, preferably with a deal with our EU partners,” Raab said. “But in any event, if they don’t move, there’s no movement or flexibility from the EU side, then we’ll leave on what’s called WTO (World Trade Organization) terms.”

Raab, who took office two weeks ago, was in Mexico as part of a visit to North America to strengthen Britain’s economic ties with the region. Arguing there were “huge opportunities” for trade and investment with Mexico, he said it was too early to forecast how quickly a joint free trade deal could be sealed.

Opinion polls suggest Brexit is putting strains on the stability of the United Kingdom.

A survey by polling firm YouGov of 892 Conservative Party members showed Brexit was more important to them than keeping Scotland and Northern Ireland in the United Kingdom.

Meanwhile, a poll published this week showed that there was more support in Scotland for leaving the United Kingdom than there was for staying part of it.

When asked whether Scotland’s departure from the United Kingdom was a price worth paying for Brexit, Raab said:

“I don’t accept that analysis or those assumptions for a second. The biggest risk to the union would be to have a second (Brexit) referendum because that would empower the SNP (Scottish National Party) with their argument for independence.”

The separatist SNP controls Scotland’s devolved regional government, and lost a 2014 referendum on Scottish independence that at the time was billed as a once-in-a-generation vote.

However, in the 2016 Brexit referendum, some 62% of Scottish voters elected to remain part of the EU. The SNP argues that since Scotland is being taken out of the EU against its will, its voters should be consulted again on independence.