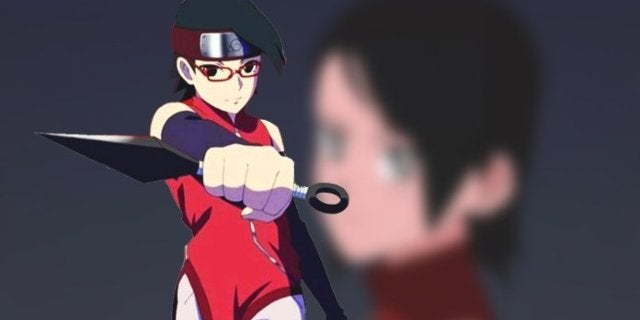 Boruto: Naruto Next Generations is supposed to (as the titled implies) transport Naruto fans into the next generation of the shinobi world. Boruto gives the Naruto saga a nice modern polish, in which all our favorite (surviving) Naruto characters are now fully-grown adults and leaders, many of whom are raising young ninja of their own.

However, one Naruto fans is taking Boruto down a much more nostalgic road, with this piece of Sarada artwork, done in the style of ’90s-era anime:

If Boruto was a 90s anime from r/Boruto

The most immediate association that fans have with this style of art is that it looks like something that came right out of Sailor Moon. Indeed, this version of Sarada looks like she could fit right in with the rest of the Sailor Scouts, if not for that Uchiha attitude, which is still perfectly drawn all over her face. Not sure why the artist chose to leave off Sarada’s signature glasses, as they are not something you’d need to eliminate to create a ’90s Boruto vibe.

Sarada’s quickly become fan-favorite of this new Boruto series, and one of the most prominent characters in the story. Sarada combines the raw power of her mother, Sakura, and the precision and skill of her father, Sasuke, thanks to that Uchiha Sharingan. The combined powers of Sarada’s parents makes her one of the most formidable shinobi of Boruto’s generation, and his valued partner in the new iteration of Team 7.

In the Boruto anime, Sarada recently got passed over for Chunin promotion, as the honor instead went to Shikadai Nara. Naruto, Sasuke, and Shikamaru all felt as though Sarada has reached the level of skill and cunning to be an effective leader as a Chunin, but that she still lacks the level of trust and compassion for her comrades that Shikadai has demonstrated. Both the Boruto anime and manga have been sidelining Sarada as of late, but with Sasuke set to make a return on both fronts, hopefully Sarada will be back in the limelight, as well.

Originally created by Masashi Kishimoto for Shueisha’s Weekly Shonen Jump in 1999, Narutofollows a young ninja, with a sealed demon within him, that wishes to become the leader of his home village. The series ran for 700 chapters overall, and was adapted into an anime series by Studio Pierrot and Aniplex that ran from 2002 to 2017. The series was popular enough to warrant a sequel, Boruto: Naruto Next Generations which is set several years after the events of the original Naruto story and features the children of many of its key characters such as Naruto and Hinata.

Exciting news, Pokemon fans — A Wild Podcast Has Appeared, the official Pokemon podcast of ComicBook.com, is here! Check it out by clicking here or listen below.

Crunch talks between RMT and Network Rail begin as union threatens further strikes
Russia says it has ‘full control’ of city of Lysychansk but Ukraine denies claim
What to Watch: Girl in the Picture, Big Brother, Black Bird
Boy, 3, dies after falling from 29th floor balcony in New York
Magnum P.I. Cast Reacts to Revival at NBC: “Time To Dust Off The Aloha Shirt”