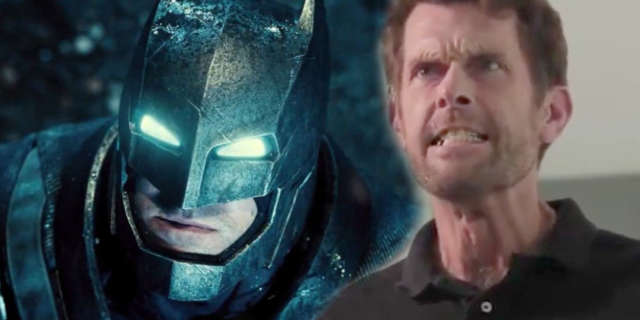 Yesterday, The CW announced that Batman: The Animated Series icon Kevin Conroy will appear on “Crisis on Infinite Earths,” the upcoming Arrowverse crossover event that will bridge December 2019 and January 2020. The addition of Conroy comes on the heels of announcements at Comic Con that Burt Ward (Batman) would appear, and Brandon Routh would reprise his role from Superman Returns. Earlier this weekend, news broke that Cress Williams will appear as Black Lightning in “Crisis on Infinite Earths.” The likelihood is that all of these actors will have minor roles or cameos as representatives from alternate Earths — but what if Conroy turns out to be the “real” Batman?

While Batman has been alluded to several times over the years, and eventually named outright during “Elseworlds” and in the Batwoman pilot, fans of the Arrowverse have never seen Bruce Wayne or Batman in the flesh. Given his age relative to Ruby Rose’s (who plays his cousin Batwoman), it seems unlikely that Conroy will play “our” Batman, and may instead be the Batman of an alternate Earth. Several of the characters, particularly Black Lightning and Brandon Routh’s Superman, are already established to be from different Earths. Of course, in the comics, Crisis on Infinite Earths centered on a battle between the combined superheroes (and even some villains) of the DC multiverse and an immortal, cosmic threat known as the Anti-Monitor. Like The Monitor, the Anti-Monitor will be played by LaMonica Garrett in the Arrowverse. As the Anti-Monitor destroys realities, he replaces their positive matter energy with antimatter, growing his own power and sphere of influence. He was eventually stopped by the sacrifices of several heroes, including The Flash and Supergirl, as well as the merging of multiple universes to save reality by becoming a single, unified timeline. Fans have long wondered whether the events of “Crisis on Infinite Earths” might bring Supergirl and possibly even Black Lightning to Earth-1, where the rest of the series take place.

If that were to happen, it doesn’t seem entirely implausible that the “merged” version of batman from Earth-1 and the Kevin Conroy Earth could be Conroy — allowing for him to essentially reprise the role he played on Batman Beyond, where he could have some kind of advisory role to Batwoman. That could allow them to only use Batman once in a blue moon, like Supergirl does with Superman — and to give a plausible, acceptable explanation to fans as to why Bruce Wayne doesn’t come back to Gotham (his two-year absence is key to the premise of Batwoman, but has been a point of contention for Batman fans who want to see him show up in the Arrowverse).

This, of course, is a lot of “ifs,” but it’s a fun thought experiment, a plausible outcome of the “Crisis on Infinite Earths,” and could give fans a lot more fun with Kevin Conroy’s Batman on The CW down the line. In addition to being the Arrowverse’s first Batman (at least as far as we know; obviously another one may appear onscreen earlier in “Crisis on Infinite Earths”), this will be Conroy’s first time playing the character-defining character in live action. Given his build, and the recent revelation that Routh will be playing a Kingdom Come-inspired version of Superman, it is not much of a leap to wonder whether Conroy will play the Batman opposite Routh’s Superman, and be using a cane or an exoskeleton a la Batman Beyond or Kingdom Come.

“Crisis on Infinite Earths” will be the biggest crossover event that The CW‘s DC Universe TV series have attempted yet, with five series (Arrow, The Flash, Supergirl, DC’s Legends of Tomorrow, and Batwoman) participating over two quarters, presumably in December and January. The story will, at least according to the onscreen canon established so far and comments by cast and producers at Comic Con, feature the death of Oliver Queen (Stephen Amell), who struck a mysterious deal with The Monitor during last season’s “Elseworlds” crossover in order to save the lives of Barry Allen (Grant Gustin) and Kara Zor-El (Melissa Benoist), who were “destined” to die in the event.

“Crisis on Infinite Earths” will air on The CW this winter. Check back throughout the day for updates from the network’s TCA panels. Are you excited to see Bruce Wayne — and Kevin Conroy! — come to the Arrowverse? Chime in below or tweet your thoughts to @russburlingame.

The crew is back for Episode 53 and there’s a lot to discuss headed into the weekend. We’re reviewing Hobbs & Shaw, the new Call of Duty: Modern Warfare, and debating whether or not DC Comics will find success under AT&T. We’ve also got a new cast reveal and news about a Marvel crossover – all in today’s episode of #ComicBookNation! Make sure to subscribe now to never miss an episode!