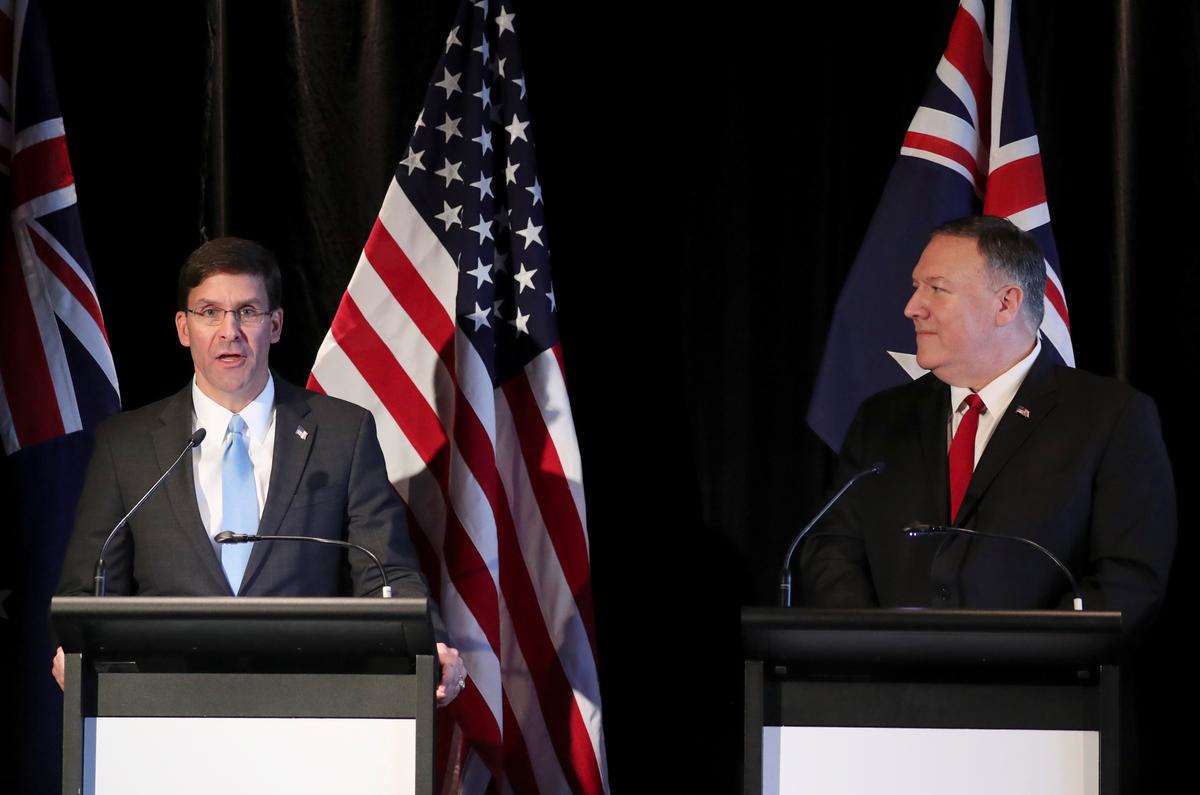 U.S. Secretary of Defence Mark Esper speaks next to U.S. Secretary of State Mike Pompeo during a joint news conference with their Australia counterparts in Sydney, Australia, August 4, 2019. REUTERS/Jonathan Ernst/Pool

The comments by Esper on his first overseas trip as U.S. defense secretary threaten to inflame already heightened tensions between Washington and Beijing as they wage an escalating trade war.

China’s increasing assertiveness, especially in the energy-rich South China Sea, has raised concerns within the region and the United States is challenging Chinese maritime hegemony and seeking stronger ties with nations pushing back against Beijing.

“We firmly believe no one nation can or should dominate the Indo-Pacific and we are working alongside our allies and partners to address the region’s pressing security needs, Esper told reporters in Sydney.

“We also stand firmly against a disturbing pattern of aggressive behavior, destabilizing behavior from China. This includes weaponizing the global commons, using predatory economics and debt for sovereignty deals, and promoting state-sponsored theft of other nations’ intellectual property.”China has unnerved the region and angered the United States by installing military equipment and other facilities on artificial islands it has made in the disputed South China Sea.

China claims large parts of the South China Sea through which roughly $3.4 trillion in shipping passes each year. Countries including Malaysia, the Philippines, Taiwan and Vietnam contest the territorial claims.

U.S. Secretary of State Mike Pompeo on Friday decried “decades of bad behavior” from China that have hampered free trade, laying out a case at a Southeast Asian forum in Bangkok for Washington’s trade war with Beijing.

Both Esper and Pompeo met with their Australian counterparts in Sydney on Sunday at an annual security forum where the United States and Australia pledged to strengthen opposition to Chinese activities in the Pacific.

The United States and its Western allies worry that China is using foreign aid to secure greater influence over small Pacific countries which control vast swathes of resource-rich ocean.

Australia, traditionally the major power in the South Pacific, has promised up to A$3 billion ($2.04 billion) in grants and cheap loans to counter what Washington describes as China’s “payday loan diplomacy”.

“Cooperation with us and our Australian friends bring mutual benefits, not zeros, deals where one side wins and other risks losing,” said Pompeo in a thinly veiled criticism of China’s aid.