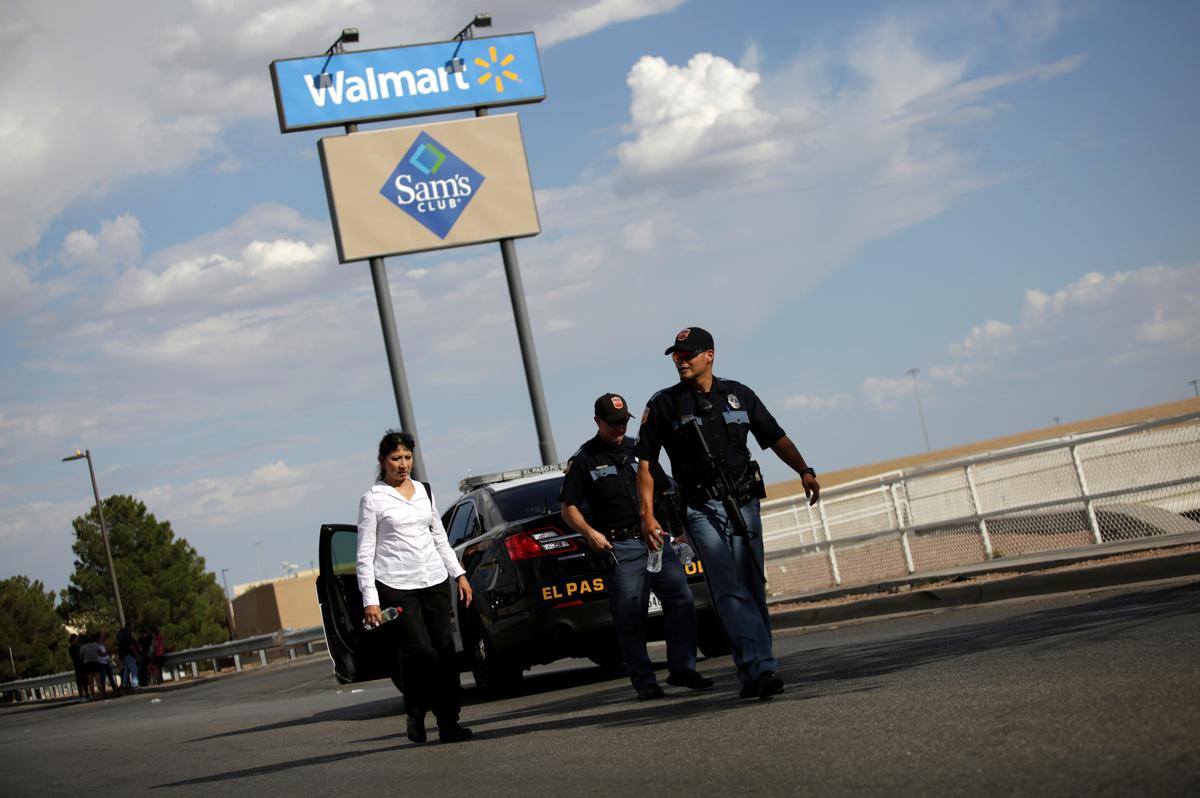 EL PASO, Texas (Reuters) – A man armed with a rifle opened fire at a Walmart store in El Paso, Texas, on Saturday, killing 20 people and wounding 26 others as panicked shoppers and employees scurried for cover before the gunman surrendered to police at the scene.

Many shoppers in the busy store were buying back-to-school supplies when they found themselves caught up in the latest U.S. mass shooting, which came just six days after a teenage gunman killed three people at a summer food festival in Northern California.

Saturday’s suspect was officially identified as a 21-year-old white male from Allen, Texas, a Dallas suburb some 650 miles (1,046 km) east of El Paso, which lies along the Rio Grande, across the U.S.-Mexico border from Ciudad Juarez.

El Paso police chief Greg Allen said authorities were examining a manifesto from the suspect indicating “there is a potential nexus to a hate crime.” Officials declined to elaborate and said the investigation was continuing.

But a four-page statement posted on 8chan, an online message board often used by extremists, and believed to have been authored by the suspect, called the Walmart attack “a response to the Hispanic invasion of Texas.”

It also expressed for support for the gunman who killed 51 people at two mosques in Christchurch, New Zealand.

CNN reported that the FBI has opened a domestic terror investigation into the shooting.

El Paso and Ciudad Juarez, together with the neighboring city of Las Cruces, New Mexico, form a metropolitan border area of some 2.5 million residents constituting one of the largest bilingual, bi-national populations in the Western Hemisphere.

The carnage ranked as the eighth-deadliest mass shooting in modern U.S. history, after a 1984 shooting in San Ysidro, California, that claimed 21 lives.

“We are going to aggressively prosecute it both as capital murder but also as a hate crime, which is exactly what it appears to be,” Texas Governor Greg Abbott told reporters, adding, “I don’t want to get ahead of the evidence.”

Details of how the shooting unfolded were not immediately clear. But video from the scene broadcast by CNN showed victims lying on the ground inside and outside the store.

The suspect surrendered to police as officers closed in on him, and he was taken into custody without incident, according to authorities. Video posted on social media appeared to show him being handcuffed by police and placed in a squad car.

Citing a law enforcement source, El Paso television station KTSM published on its website what it said were two photos of the suspect taken by security cameras as he entered the Walmart.

The images showed a young man wearing eyeglasses, khaki trousers and a dark T-shirt, wielding an assault-style rifle. He appeared to be wearing headphones or ear protection. Reuters could not immediately verify the authenticity of the images.

On Twitter, U.S. President Donald Trump branded the shooting “an act of cowardice,” adding, “I know that I stand with everyone in this Country to condemn today’s hateful act. There are no reasons or excuses that will ever justify killing innocent people.”

The University Medical Center of El Paso received 13 patients from the shooting, including one victim who died, hospital spokesman Ryan Mielke told CNN. Some of the patients were in surgery while others were in stable condition, he added.

Two of the patients who arrived at the hospital were children with non-life threatening injuries, he said.

Police is seen after a mass shooting at a Walmart in El Paso, Texas, U.S. August 3, 2019. REUTERS/Jose Luis Gonzalez

Local media said there was such an overwhelming response to an appeal by the police department for blood donations to help the wounded that long lines formed at medical centers, some of which had to tell would-be donors to come back on Sunday.

Some people handed out bottled water and slices of pizza to those still waiting in line.

Officers from multiple law enforcement agencies raced to the scene at the Walmart and nearby Cielo Vista Mall, including police, state troopers, Homeland Security agents and border patrol.

Shoppers fled for their lives, including Kianna Long who was at the Walmart with her husband when they heard gunfire.

“People were panicking and running,” Long said. “They were running close to the floor, people were dropping on the floor.”

She and her husband sprinted through a stock room at the back of the store before huddling with other customers in a steel container in a shipping area.

Walmart said in a statement: “We’re in shock over the tragic events … We’re praying for the victims, the community & our associates, as well as the first responders.”

In the aftermath of the shooting, the Walmart and adjacent businesses, including the mall and a movie theater, were shut down as law enforcement officers scoured the area in an initial search for additional possible suspects. Authorities later said they believed the gunman had acted alone.

Video posted on Twitter showed customers at one department store being evacuated with their hands up.

The tragedy in El Paso came just six days after a teenage gunman opened fire with an assault-style rifle on a crowd attending the annual Garlic Festival in Gilroy, California, killing three people and injuring a dozen others before he was shot by police and ultimately took his own life.

At a Democratic presidential candidate forum in Las Vegas a clearly emotional Beto O’Rourke, a former Texas congressman who is from El Paso, broke the news to the audience about the deadly mass shooting in his home city.

O’Rourke said he had spoken to his wife Amy, who was driving in the city with one of their children. Addressing reporters, he teared up and struggled to deliver a short statement.

“I am incredibly saddened and it’s very hard to think about this,” he said. “El Paso is the strongest place in the world. This community is going to come together. I’m going back there right now to be with my family, to be with my home town.”

How to Stand Up to a Dictator
Jennifer Lopez Shares Sweet Pics From Her And Ben Affleck’s First Thanksgiving As A Married Couple
Jodie Sweetin Has a Golden Idea for Fuller House Reboot
Ruling party will be watching as unprecedented protests break out in China, but so too will the world
Musk would back Trump rival in 2024 election – with former president under fire for dining with white supremacist