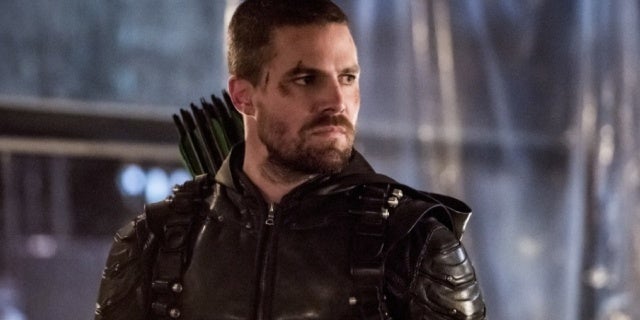 Arrow‘s penultimate season ended on a pretty significant shocker, with The Monitor (LaMonica Garrett) telling Oliver Queen (Stephen Amell) of his impending death, and recruiting him in a fight to save the multiverse. When the show returns in October for its ten-episode final season, that event will apparently still be fairly recent. During the show’s panel during The CW’s Television Critics Association press tour panel, it was revealed that the Season 8 premiere will take place a week after last season’s finale.

“We pick up a week later,” showrunner Beth Schwartz revealed.

Given the immediacy of Arrow‘s final run – with the “Crisis on Infinite Earths” crossover starting just two months after the premiere – this short gap in time does make sense. Still, it throws an interesting layer on top of the events of the season, which are set to take a trip down the show’s memory lane.

“The good news is unlike Game of Thrones or unlike Lost, were not burdened with having to answer a question,” consulting producer Marc Guggenheim told ComicBook.com last weekend. “We’re not burdened with ‘who’s going to sit on the Iron Throne?’ or “what was the island?’ so we get to do, I think, a much more character-based ending. So, at the same time, the complication for us is that we also have “Crisis” and I think a lot of the stuff that was always in my head in terms of how to end the show we’re now actually going to end up doing in the crossover instead so it’s like now what does the series finale become? But, you know, we’ve got plans.”

“I’m really excited about it.” Guggenheim continued. “The goal is to make it satisfying for the fans, but the good news for us is we don’t have the challenges that Lost or Game of Thrones had,” he continued. We also don’t have the ratings, so there’s that, too. But I feel the pain of Damon, Benioff, and Weiss. It’s hard. It’s a hard thing to do in a way that satisfies everyone. I also think, because I’ve been thinking how does one end a series, there’s what the initial reaction to something is and then there’s how it stands the test of time and those two things are not always the same.”

The crew is back for Episode 53 and there’s a lot to discuss headed into the weekend. We’re reviewing Hobbs & Shaw, the new Call of Duty: Modern Warfare, and debating whether or not DC Comics will find success under AT&T. We’ve also got a new cast reveal and news about a Marvel crossover – all in today’s episode of #ComicBookNation! Make sure to subscribe now to never miss an episode!