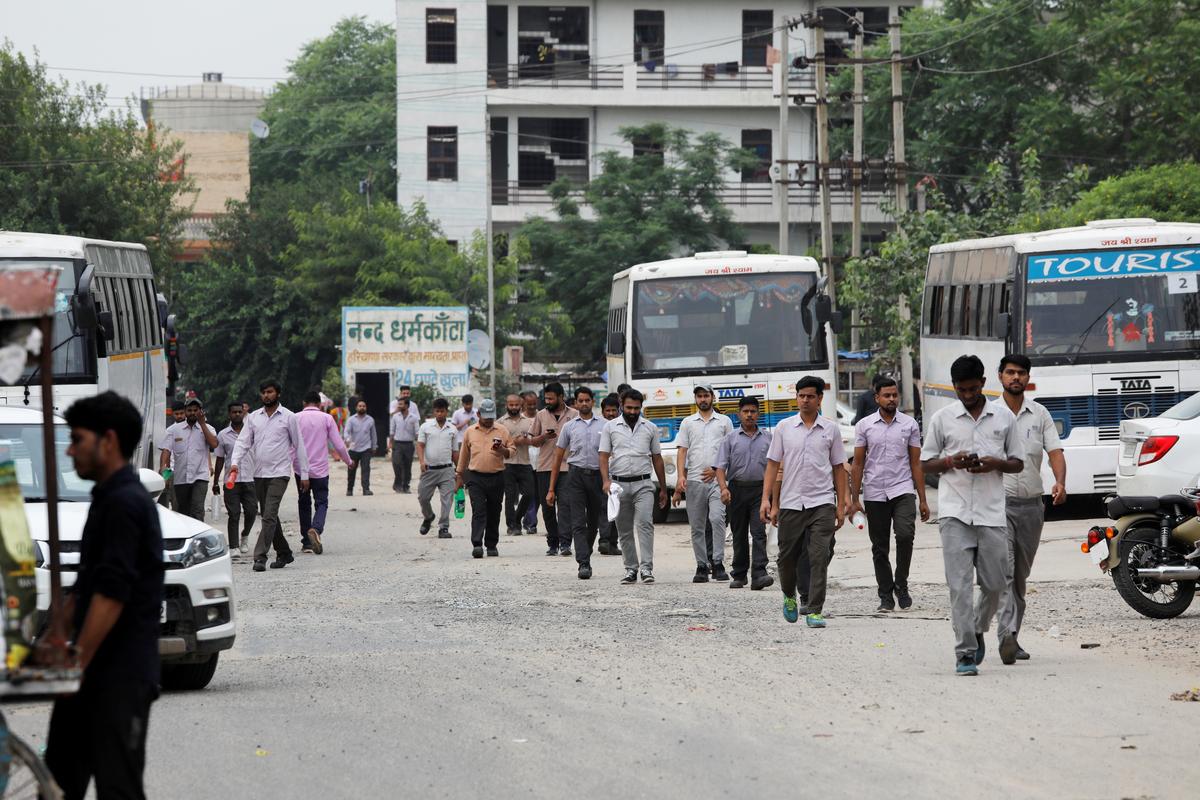 MANESAR/NEW DELHI (Reuters) – India’s biggest automaker, Maruti Suzuki India Ltd (MRTI.NS), said it had cut the number of its temporary workers to cope with a slowdown in auto sales, adding to the jobless problem in Asia’s third largest economy.

Labourers walk along a street next to a Maruti Suzuki India Ltd. manufacturing plant in Manesar in the northern state of Haryana, India, August 2, 2019. REUTERS/Anushree Fadnavis

The vehicle industry, accounting for nearly half of India’s manufacturing output, is facing one of its worst slowdowns in nearly a decade, with vehicle sales falling rapidly. There is little sign of a swift revival.

Maruti Suzuki said in an email sent to Reuters it employed 18,845 temporary workers on average in the six months ended June 30, down 6% or 1,181 from the same period last year. The company also said job cuts had accelerated since April.

Two sources familiar with the matter said the company would freeze hiring new employees until the downturn reversed.

It is the first time the reduction has been reported. The listed firm is not required to disclose any reduction in its temporary workforce.

India’s jobless rate rose to 7.51% in July 2019 from 5.66% a year earlier, according to private data group CMIE. Those figures do not include many people on the margins of society who are day labourers and are often unemployed or underemployed.

Economists say government jobless figures are out of date and lack credibility.

Maruti Suzuki, majority-owned by Japan’s Suzuki Motor Corp (7269.T), said it had not reduced its 15,892-strong more permanent workforce. It declined to say whether further reductions were planned or comment on the hiring freeze.

The automaker previously said it had cut production by 10.3% in the first six months of the year.

Maruti Suzuki, which produces every second passenger vehicle sold in India, reported a 33.5% decline in sales in July to 109,265 vehicles compared with July 2018.

Chairman R. C. Bhargava told Reuters the workforce was being reduced to reflect the slowdown in business, adding that this was one reason carmakers liked to have some temporary workers, although he did not give details about the job losses.

“One of the consequences of a slowdown is that the marginal players and weaker players find it difficult to survive. When do consolidations happen in business? Only when times are difficult,” he added.

Two temporary workers outside the Manesar plant in the northern Indian state of Haryana, who did not want to be named, said the number of days with three shifts had been reduce. They said some assembly lines at the plant were not operating.

Kuldeep Janghu, general secretary of the Maruti Udyog workers union, said the average wage of temporary workers were about $250 a month at the company’s Manesar and Gurugram plants.

The two plants have combined capacity to produce more than 1.5 million vehicles a year.

The company rolled out its popular Maruti 800 model from the Gurugram plant in 1983.

The auto sales downturn has put jobs across the industry at risk. The Automotive Component Manufacturers Association of India (ACMA) said parts makers could slash a fifth of their 5 million workforce if the slump continued.