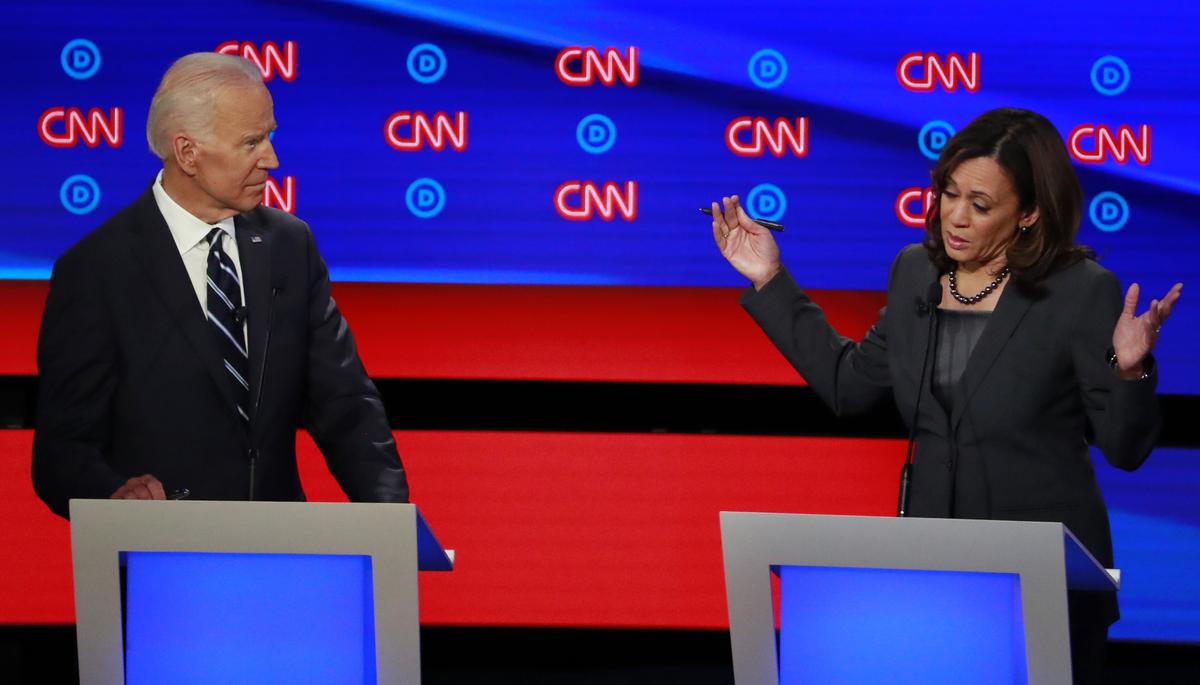 DETROIT (Reuters) – Democratic front-runner Joe Biden was again the main target of his rivals at the second presidential debate on Wednesday, as many of the nine other candidates on stage took aim at his track record on race, criminal justice, immigration and healthcare.

“Go easy on me, kid,” the former vice president told Senator Kamala Harris of California with a smile as they greeted each other on stage before the debate began in Detroit.

But neither one had any plans to go easy, and they went after each other in a series of tough exchanges.

As the highest-profile candidates on the stage, both of them were also repeatedly targeted by the other candidates.

Biden did better than at the first round of debates in Miami last month, but his performance was still uneven. Harris was also on the defensive at times, failing to repeat her dominant performance in Miami.

Amid feisty exchanges, some candidates warned they should be focusing their fire on their real target: Republican President Donald Trump.

Here are some highlights from the debate.

The first question went to Harris, who was asked to respond to the Biden campaign’s characterization of her recently released healthcare plan as a “have-it-every-which-way approach.”

“They are probably confused because they have never read it,” Harris responded.

She said her plan is a response to listening to voters, who want public and private options for now, with 10-year phase-in period to transition to a Medicare-for-all system, as opposed to a four-year phase-in period offered by progressive U.S. Senator Bernie Sanders of Vermont, who took part in Tuesday night’s debate.

Biden said Harris did not fully explain how she would pay for her plan. Harris countered that Biden’s plan would leave 10 million people uninsured and called it the “status quo.”

The question led to some of the most clearly articulated positions on expanding access to health insurance the candidates have offered to date.

Senator Kirsten Gillibrand of New York, another of the 10 candidates on stage, said Democrats need to remember that Republicans are chipping away at the Affordable Care Act enacted by former President Barack Obama and that Democratic candidates are at “risk of losing the forest for the trees.”

“This pitting against progressives, against moderates, saying one is realistic and the other doesn’t care enough – that to me is dividing or party and demoralizing us in the face of the real enemy here,” Senator Cory Booker of New Jersey said.

After healthcare, the debate moderators moved on to immigration, asking Julian Castro, Obama’s former housing department head, why he broke with the administration’s former immigration chief to call for decriminalizing illegal border crossings.

“You’re not electing me to follow. You’re electing me to lead. And open borders is a right-wing talking point, and frankly I’m disappointed that some folks, including some folks on this stage, have taken the bait,” Castro responded.

The Texan was the first 2020 candidate to call for decriminalizing illegal crossings on the U.S.-Mexico border, and most of the others have followed. Of those onstage on Wednesday, congresswoman Tulsi Gabbard remains undecided on the issue, and Senator Michael Bennet has rejected it outright.

“I have guts enough to say his plan doesn’t make sense,” Biden said of Castro.

“To compare him to Donald Trump, I think is absolutely bizarre,” Biden countered.

Booker, again, told his colleagues they were “playing into Republican hands.”

The topic of criminal justice resulted in Biden and Booker engaging in one of the most fiery clashes of the night.

Booker signaled in the weeks leading up the debate that he was going to take Biden to task for his stewardship of a 1994 crime bill that exacerbated mass incarceration in communities of color.

Biden, who recently released a proposal that would undo major elements of the 1994 law, was prepared. He questioned Booker’s record as mayor of Newark, New Jersey, when the federal government investigated whether its “stop-and-frisk” policy targeted minorities.

Booker said it is “no secret that I inherited … a police department with massive problems,” and sought to pressure Biden again on the 1994 law.

“This is one of those instances where the house was set on fire and you claimed responsibility for those laws. And you can’t just now come out with a plan to put out that fire,” Booker said.

On Booker’s criticism of Biden and the 1994 crime bill, Castro agreed: “He has flip-flopped on these things. And that’s clear.”

The Winchesters Season 1 Episode 7 Review: Reflections
Yonahh Guy Drops “Jumpin” and Hints at Electro-Pop Inspired Album
Ashton Kutcher Recalls How Mila Kunis Supported Him Amid Health Battle
Rail union urged not to ‘hold country to ransom’ and accept ‘generous’ pay offer
Jennifer Lopez Revealed Which Of Her Classic Films She Wants To Get A Sequel, And You May Be Surprised