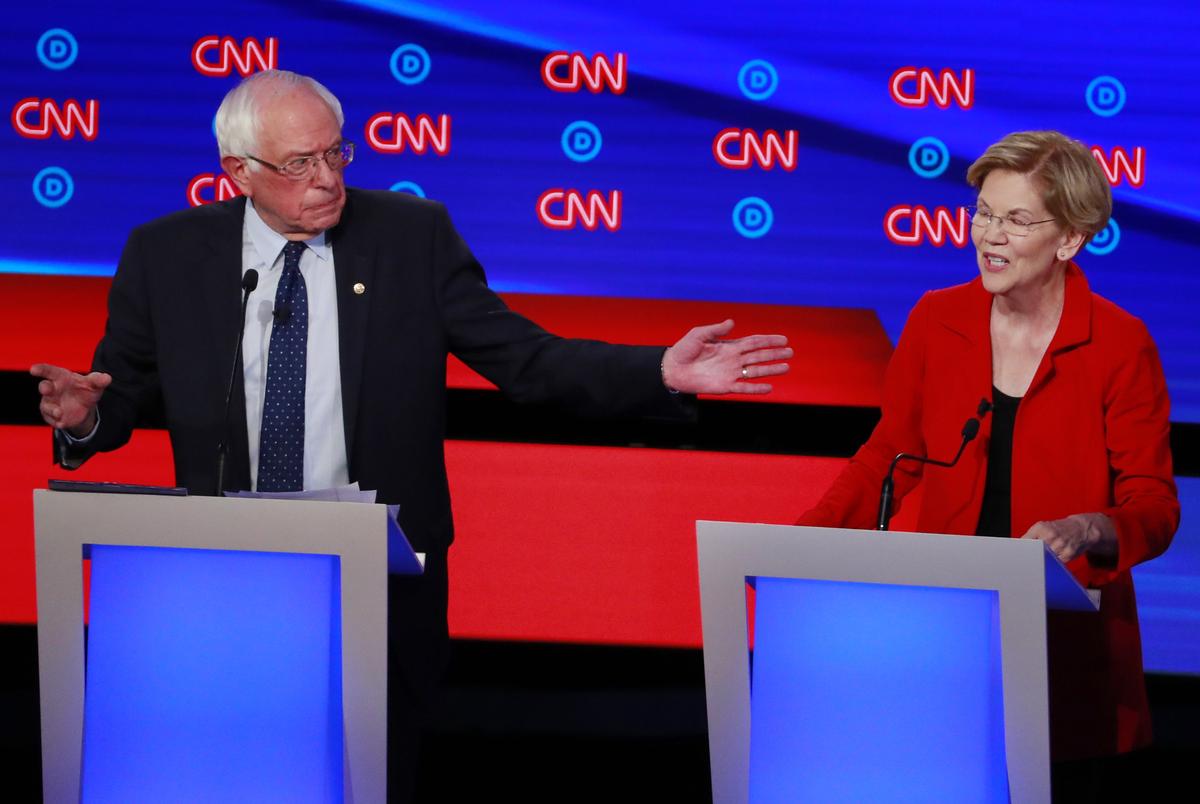 DETROIT (Reuters) – Elizabeth Warren and Bernie Sanders offered an unabashed defense of their progressive policies during a Democratic presidential debate on Tuesday, as their more moderate rivals took aim at their proposals as unrealistic and politically untenable.

The debate frequently pitted the two U.S. senators against the rest of the 10 candidates on stage, with healthcare and immigration policy highlighting the divisions between the two camps.

On the first night of back-to-back debates, Democrats were united in stressing the urgency of defeating Republican President Donald Trump in the November 2020 election. But they delivered bruising critiques of their party rivals’ positions as detailed policy disputes dominated the nearly three-hour event.

Trump has been eager to paint the entire Democratic field as socialists, seeking to make any eventual nominee untenable to voters by arguing Democrats want to raise taxes, open the U.S. borders and take away private healthcare.

The dispute between the moderate and liberal wings of the Democratic Party highlighted the central question of the nominating contest: Which candidate in the field of more than two dozen would be best positioned to beat Trump next year?

Montana Governor Steve Bullock, emerging as a forceful voice in his first presidential debate, criticized fellow candidates for being too liberal in the opening round of debates last month in Miami.

“Watching that last debate, folks seemed more concerned about scoring points or outdoing each other with wish-list economics than making sure Americans know we hear their voices and will help their lives,” Bullock said.

Progressives argued their policies would excite voters and allow them to draw a distinct contrast to Trump.

Taking a jab at former U.S. Representative John Delaney, who often played the role of liberal foil during the debate, Warren said: “I don’t understand why anybody goes to all the trouble of running for president of the United States to talk about what we really can’t do and shouldn’t fight for.”

As the front-runners in the polls among the candidates debating on Tuesday, Sanders and Warren often found themselves defending the policy positions they share.

The two are seeking to gain ground against former Vice President Joe Biden, who currently leads in opinion polls among Democratic contenders.

The early part of the debate centered on a dispute about the future of the U.S. healthcare system, and whether Democrats should embrace Medicare for All proposals that would have the government take over the health insurance industry.

The divisions over how best to provide Americans access to affordable healthcare is one of the early defining issues in the Democratic race for the 2020 presidential nomination to take on Trump.

Some contenders argued the proposal pushed by the progressives would take private insurance away from people who currently prefer their coverage and force a tax increase on the middle class.

“Why do we have to be the party of taking something away from people?” said Delaney, who has been critical of Medicare for All.

He argued that Democrats should not back proposals that would eliminate private insurance.

“They are running on telling half the country that your health insurance is illegal,” Delaney said, pointing to Warren and Sanders.

Warren interjected to defend the proposal.

“We’re not trying to take healthcare away from anyone. That’s what Republicans are trying to do.”

Sanders, who has introduced a Medicare for All bill in the U.S. Senate, said: “Healthcare is a human right, not a privilege. I believe that, I will fight for that.”

The candidates also differed on immigration policy – disagreeing on whether illegal border crossings should be decriminalized.

“You don’t have to decriminalize everything,” Bullock said. “What you have to do is to have a president in there with the judgment and the decency to treat someone that comes to the border like one of our own.”

Warren disagreed, saying: “We need to expand legal immigration, we need to create a path for citizenship not just for dreamers but for grandmas and for people who have been working here in the farms and for students who have overstayed their visas.”

“You are playing into Donald Trump’s hands,” Bullock said.

Lower-tier candidates were aiming to produce the kind of post-debate surge that U.S. Senator Kamala Harris enjoyed after a strong performance in the first debate after confronting Biden on the issue of race.

The two nights in Detroit could be the last chance for many contenders to debate on the national stage, as the Democratic National Committee will double its fundraising and polling requirements to qualify for participation in the next debates in September and October.

Ten more candidates will face off on Wednesday night, including Biden and Harris.

Jennifer Lopez Shares Sweet Pics From Her And Ben Affleck’s First Thanksgiving As A Married Couple
Trump loses bid to avoid handing over tax returns
Retirees and women to be targeted in Halfords drive for 1,000 new staff
G Jones caps off a stellar year with another new EP, “Illusory Tracks,” with Eprom & ISOxo
Posthumous debut album from i_o with Lights comes two years after his untimely passing