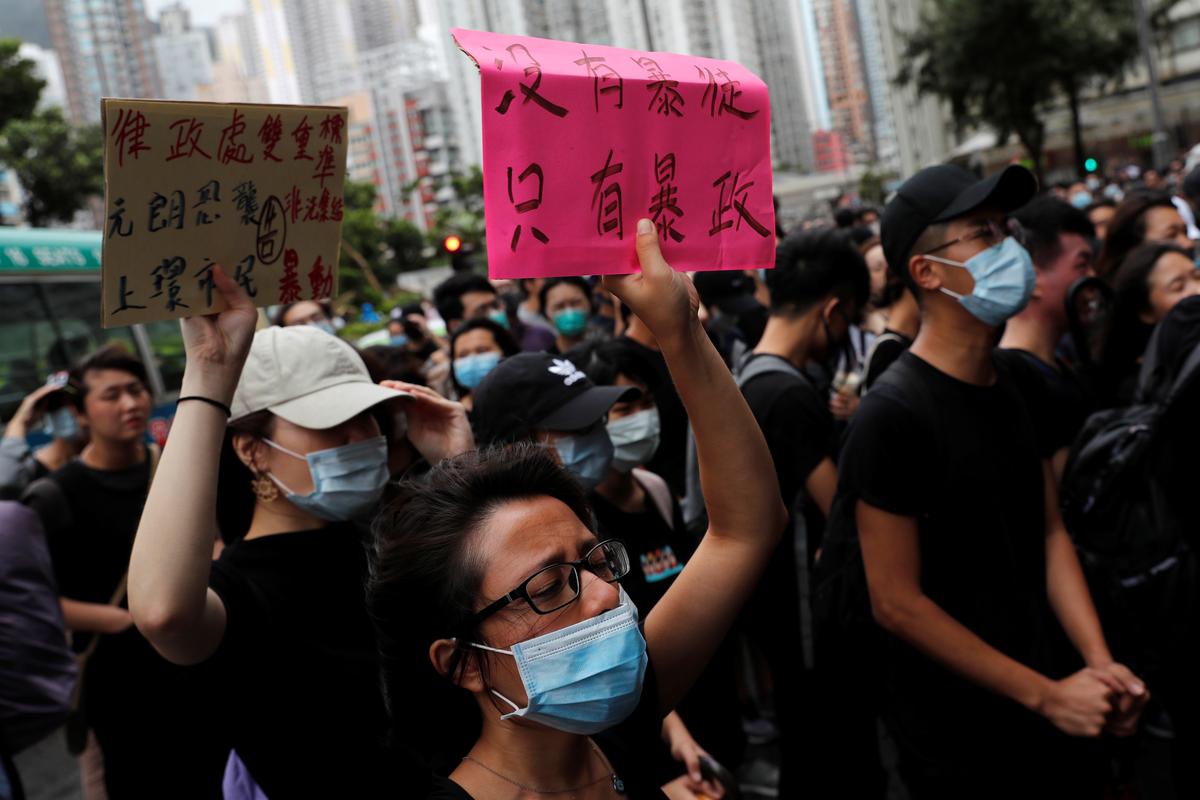 HONG KONG (Reuters) – More than 40 people appeared in a Hong Kong court on Wednesday charged with rioting for their role in a recent protest that turned violent when thousands of activists clashed with police near Beijing’s main representative office in the city.

Supporters gather outside the Eastern Courts to support the arrested anti-extradition bill protesters who face rioting charges, in Hong Kong, China July 31, 2019. The placard reads, “There is no thugs, only tyranny.” REUTERS/Tyrone Siu

A wave of protests that began in late April have plunged the former British colony into its biggest political crisis since its return to Chinese rule in 1997.

This is the first time that the authorities in the financial hub have resorted to using the rioting charge, and it could infuriate activists who have been demanding that the government avoid using the term “riot” to refer to the demonstrations.

Under Hong Kong law, rioting is defined as an unlawful assembly of three or more people where any person “commits a breach of the peace”, and a conviction can carry a 10-year prison sentence.

Hundreds gathered outside the court house chanting “revolution of our time” and “liberate Hong Kong” as the 44 defendants appeared in court.

“I’m not scared to protest. This whole thing today is just making me more angry,” said Gartner, a 21-year-old protester outside the court who declined to give his full name.

“I don’t think it will scare people.”

Nine of the defendants had been released on bail of HK$1,000 Z (US$128) by noon. They were ordered to remain in Hong Kong and a curfew was imposed between midnight and 6am.

“The Chinese government just wants to scare people not to go out and protest again. It will deter some of us,” another supporter named Syrus, 19, said outside the court.

Since mid-June the protests have escalated and become more frequent, at times shutting government offices, blocking roads and disrupting business as some of the demonstrations degenerated into violent clashes between activists and police.

Hundreds of people surrounded a police station late on Tuesday chanting “free the martyrs” after the 44 activists were charged.

The protesters were arrested after a peaceful gathering on Sunday in a park in the city’s central business district rapidly morphed into running battles between thousands of black-clad demonstrators and police, who fired rubber bullets and tear gas.

The protests were triggered by an extradition bill that would have allowed people to be sent to mainland for trial but they have now evolved into a broader backlash against the city’s government and its political masters in Beijing.

Besides calling for the extradition bill to be scrapped, rather than its suspension so far, protesters have also demanded the resignation of city leader Carrie Lam, an independent inquiry into the police’s handling of the crisis and the unconditional release of all those arrested.

China’s Liaison Office, a potent symbol of Beijing’s rule over the city since Hong Kong returned from British to Chinese rule in 1997, has become a target for growing ranks of increasingly emboldened youngsters, angry at China’s tightening grip on the city’s freedoms.

Under a “one country, two systems” formula instituted as part of China’s sovereignty, the city was promised wide-ranging freedoms denied citizens in mainland China.

Many fear the central government in Beijing is chipping away at those freedoms.

Edward Leung, one of the leaders of a movement advocating Hong Kong’s independence from China, was jailed in June last year for six years for rioting and assaulting police in a 2016 overnight protest that turned violent.