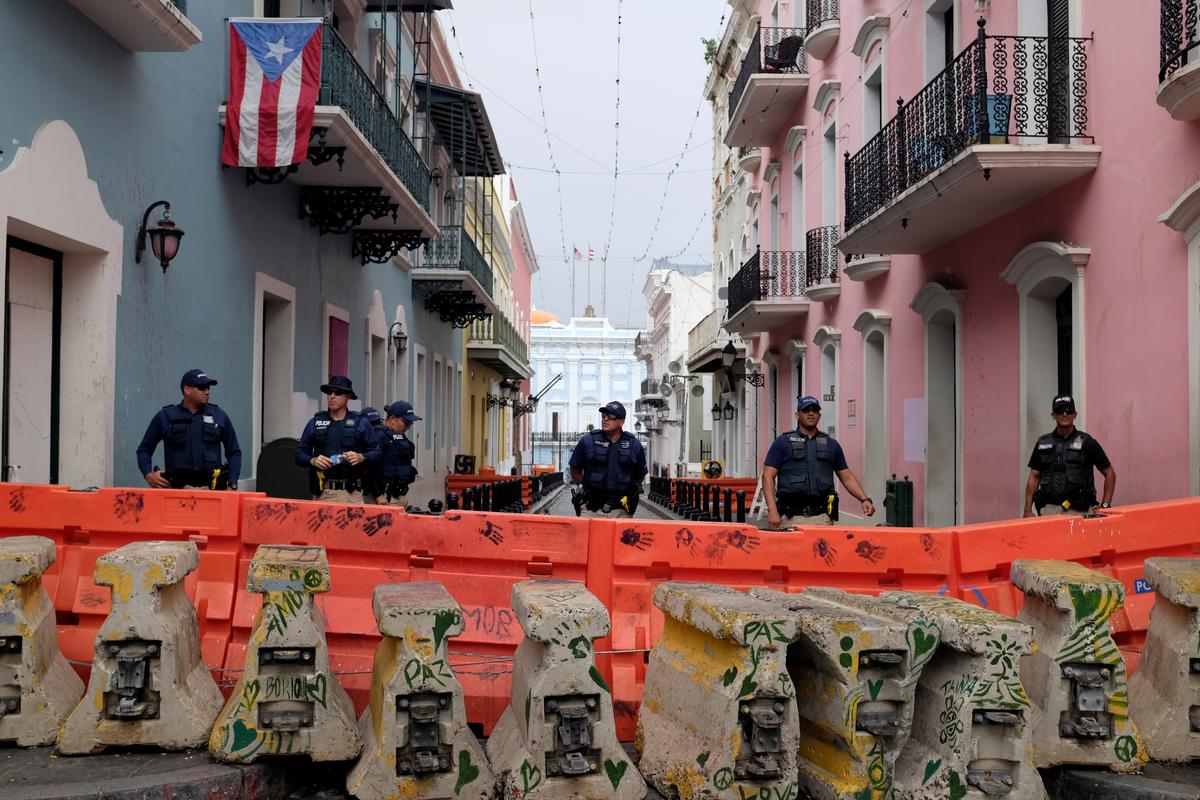 SAN JUAN (Reuters) – The resignation of Puerto Rico’s governor after mass protests has sparked a succession battle, and a Washington corporate lawyer not directly linked to the current, scandal-plagued administration could emerge as the winner.

Police officers stand guard by a barricade on a street that leads to La Fortaleza, the official residence of the Governor of Puerto Rico, and where protests calling for the resignation of Puerto Rican Governor Ricardo Rossello occurred, in Old San Juan, Puerto Rico July 26, 2019. REUTERS/Marco Bello

Governor Ricardo Rosselló said on Wednesday he would step down on Aug. 2 in the face of public anger over the release of profane chat messages and embezzlement charges against two former administration officials.

What happens in the next week before Rossello steps down is crucial. As of Friday, Secretary of Justice Wanda Vázquez is next in line to succeed him because the U.S. territory has no secretary of state, with the resignation of Luis Rivera Marín from that post in the wake of the chat scandal.

The U.S. territory’s constitution stipulates that whoever holds that post is first in line to succeed the governor.

But protesters who forced Rosselló from office have vowed to oppose Vázquez, saying she is too close to the disgraced governor.

Their ire has prompted leaders of Rosselló’s pro-statehood New Progressive Party (PNP) to consider Pierluisi as a possible successor, according to four sources familiar with the matter, who asked not to be named so they could discuss it.

He could become the next governor if nominated and confirmed as secretary of state before Aug. 2.

Pierluisi, who represented the island in Washington from 2009 to 2017, has made it clear to party leaders he would accept the job, according to one of these people. He ran against Rosselló in the gubernatorial election in 2016, losing in a primary.

Foremost in the minds of party leaders is whether Rosselló’s successor can help them retain the governorship when it comes up for grabs in November 2020.

Before the implosion of his administration, Rivera Schatz and Gonzalez were seen as potential PNP candidates to challenge Rosello in a 2020 primary.

Before the resignation, two sources told Reuters Gonzalez and Rivera Schatz were conducting private opinion polling to see which would stand a better chance with voters in 2020.

It is not entirely clear how Rossello’s early departure may have influenced their ambitions.

But Rivera Schatz is seen by some members of his party as too close to Rossello to be a viable candidate in 2020.

A representative for Vàzquez declined to comment on speculation about her future, while Gonzalez’s office did not respond to a request for comment. Rivera Schatz’s office could not immediately be reached.

Pierluisi, a former Puerto Rico secretary of justice, is favored by some Puerto Rico advocates in Washington for his familiarity with federal politics, according to one of the sources.

Another of the sources said Pierluisi has stressed to party leaders that he would not seek re-election in 2020, keeping the door open for Rivera Schatz, Gonzalez or another candidate.

But there is a potential roadblock. Pierluisi’s law firm currently advises Puerto Rico’s oversight board, a role that may constitutes a conflict of interest that would dissuade the legislature from approving him.

He also faced accusations in a 2016 New York Times report of possible conflicts of interest between legislation he had introduced and financial consulting work by his wife, allegations they both denied.

Even so, Pierluisi had a track record of gaining increased federal funding for Puerto Rico’s 3.2 million people while serving in Congress.

Puerto Ricans want a leader to steer them out of crisis and economic recession after back-to-back 2017 hurricanes that killed around 3,000 people just months after the U.S. territory filed for bankruptcy.

That said, Puerto Rico Representative Luis Vega Ramos, a member of the opposition Popular Democratic Party, said in an interview on Friday that he saw Gonzalez as a strong candidate to be appointed governor.

Earlier this week, Gonzalez proposed that President Donald Trump name a special coordinator to oversee federal funding to Puerto Rico. While the idea of federal oversight is anathema to most Puerto Ricans resentful of the island’s colonial roots, the idea could satisfy the Trump administration’s concerns about island leadership.

Her alliance with Trump may give her party its best chance at salvaging victory in 2020, Vega Ramos said, and “she would be in a better position to campaign for 2020 as an incumbent.”

The main hurdle to Gonzalez’s appointment is seen as Rivera Schatz. As Senate president, he could make it difficult for Gonzalez to be confirmed.

The new powerful US weapon being used by Ukraine against Russian targets
Anthropologie’s 4th of July Clearance Sale: Score $200 Dresses for Under $50 & More Deals Starting at $4
Crew abandons sinking ship that snapped in half after being hit by deadly typhoon
Top Gun: Maverick Continues Crushing At The Box Office, And Tom Cruise Explains Why It Took So Long To Get A Second Movie Made
Rocky Kramer’s Rock & Roll Tuesdays Presents “America Fest” On Tuesday July 5th, 2022 7 PM PT on Twitch