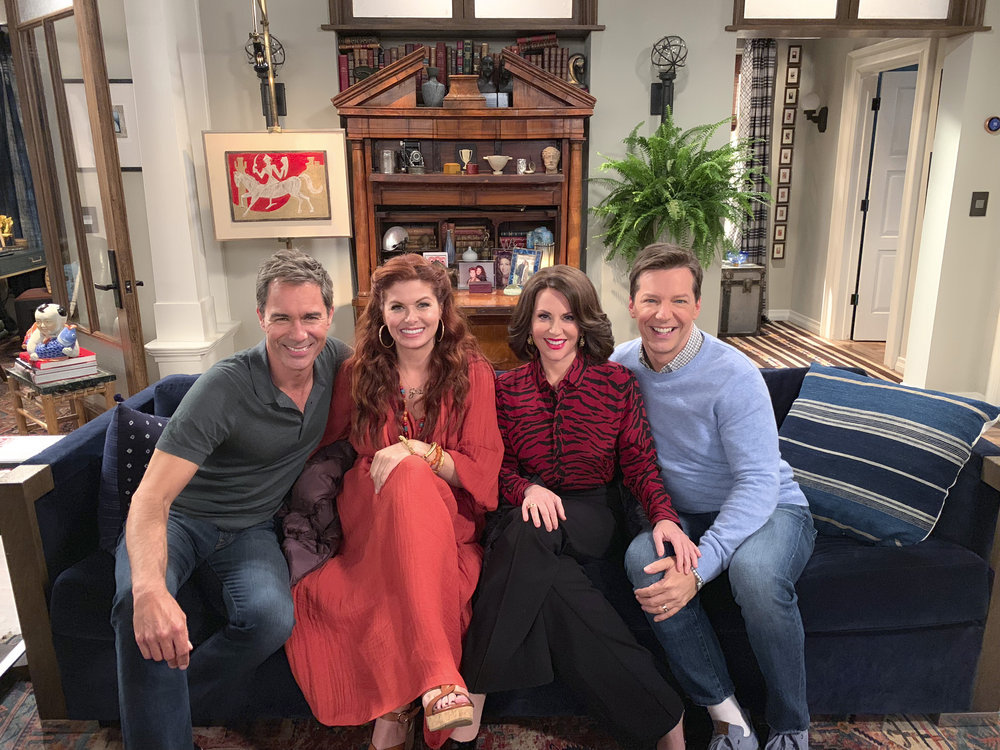 . It’s now been announced that there won’t be a 12th season (unless the show’s revived again, someday) and the final 18 episodes will air sometime in 2020.

Here’s the press release about the upcoming 11th season (which doesn’t have a premiere date yet):

UNIVERSAL CITY, Calif. – July 25, 2019 – “Will & Grace,” one of NBC’s most beloved comedy series of all time, is coming to an end as Will Truman, Grace Adler, Jack McFarland and Karen Walker will say goodbye to their incredibly loyal fans following the upcoming season that begins in 2020.

The series will conclude following an 11-season, 246-episode run over the course of four decades as one of the most influential sitcoms of our generation.

“When NBC had the opportunity to reconnect this amazing cast and creative team, we jumped at the chance. The impact and legacy of ‘Will & Grace’ simply can’t be overstated, both as a true game-changer in the portrayal of the LGBTQ community and as one of the finest comedies in television history. A huge thank you to Max, David, Jimmy and a cast that is second to none for their brilliance over an incredible run.”

“We think of the Will & Grace’ reboot episodes the way Karen Walker thinks of martinis – 51 is not enough, 53 is too many. That is why, after consulting with the cast, we all have decided this will be the final season of ‘Will & Grace.’

“In 2016, Bob Greenblatt came to us with the idea of doing a 10-episode reboot of ‘Will & Grace.’ They say you can’t go home again, but we did. And now, three seasons and 52 episodes later, we’re even more proud of something we never thought we’d get a chance to do again. We have had a once-in-a-lifetime experience twice. And for that, we owe a double debt of gratitude to NBC, this show’s supportive and caring home since day one.”

“It’s been the highlight of our careers to write for and direct four incredible artists who we consider to be the finest and funniest ensemble sitcom cast of all time – Eric McCormack, Debra Messing, Megan Mullally, and Sean Hayes.

“Of course, actors as brilliant as these four are only as good as the words they’re given. The ‘Will & Grace’ writing room has been a dream team that has consistently lifted the show to heights we never could have achieved on our own with their collective humor, warmth, and humanity.

“The hardest part about making this decision is saying goodbye to our outstanding production team and crew who, over two decades, brought passion and artistry to every department. If we had just one more season, we would have learned their names. So, thank you Handlebar Mustache, Cheese Lady, and Cargo Shorts #1 – #12. We will always think of you as family.

“And finally, our deepest gratitude goes to each and every ‘Will & Grace’ fan across the world. It was a privilege to make you laugh.”

A start date on the upcoming and final season will be announced at a later date.

“Will & Grace,” which returned to NBC in September 2017 on the momentum of a 2016 election-themed mini-reunion episode that drew more than 7 million views, will go down in TV history as one of the most acclaimed comedies of all time. The series earned an astonishing 91 Emmy Award nominations, 18 Emmy wins (including Outstanding Comedy Series) and seven SAG Awards among dozens of other kudos. In addition, the show is one of the few in TV history where each member of the cast won an Emmy.

Other significant accomplishments on the “Will & Grace” resume:

• 7 DGA nominations (and one win) for James Burrows

• The show received national attention on the political stage in 2012 when Vice President Joe Biden said, “I think ‘Will & Grace’ did more to educate the American public more than almost anything anybody has done so far” in recognition of equal marriage rights for gays and lesbians.

• Many of the show’s memorabilia – scripts, casting notes, props, etc. – are part of a gay rights exhibit in the Smithsonian’s National Museum of American History in Washington, D.C.

Unlike many other shows that return after a layoff, “Will & Grace” was able to retain its award-winning core cast. Many of the supporting cast and behind-the-scenes artisans also came back for the additional seasons.

What do you think? Have you been watching the Will & Grace revival? Do you think season 11 is the right time to end it? Would you have watched a 12th season on NBC?