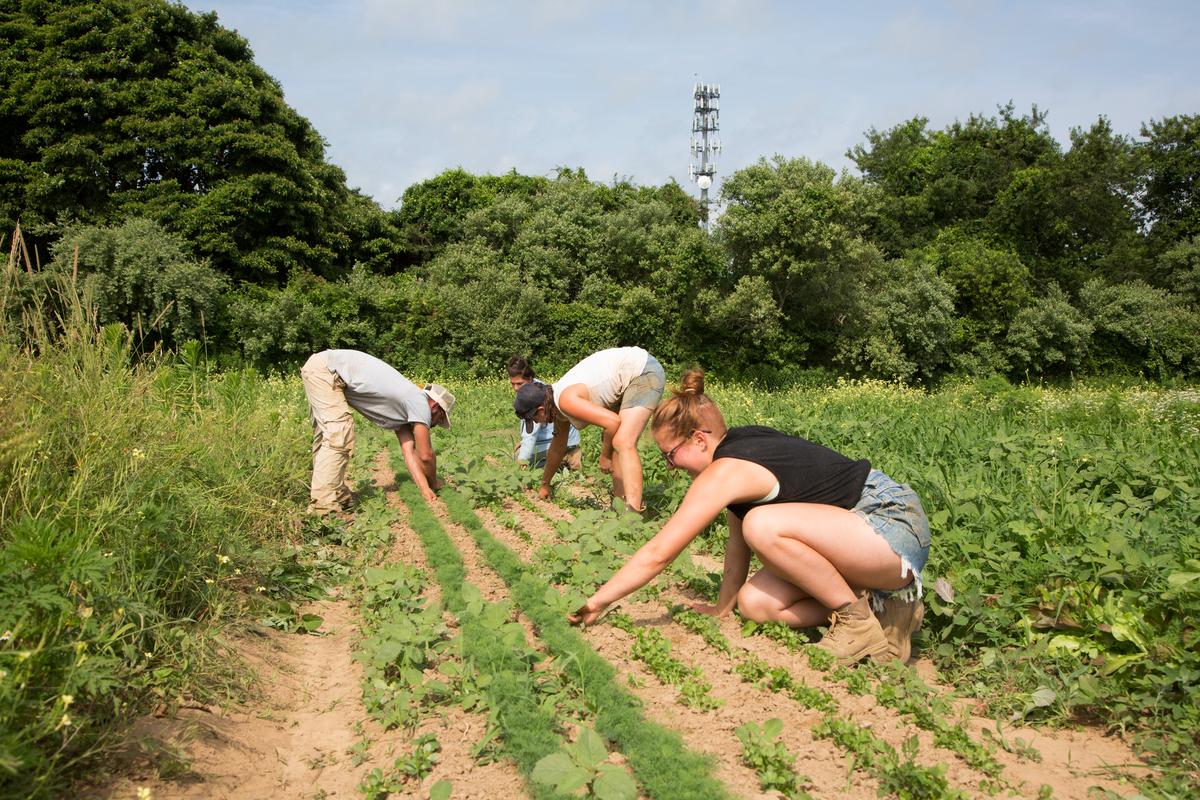 AMAGANSETT, N.Y. (Reuters) – Sporting a backwards gray cap, studded earrings and a thin, head-to-toe layer of dirt, Layton Guenther took a break from the day’s fieldwork to talk about their path from an upper-middle-class suburb to a Long Island, New York, farm.

“Farming – for where I grew up – was a very unusual career choice,” said Guenther, 32, who grew up in a New York City suburb and identifies as gender non-binary and uses they/them pronouns. But “everybody belongs on the land in their own way. None of us should feel alienated from it.”

Guenther grows potatoes, squash, wheat and other crops at Quail Hill, the Amagansett, New York, farm they manage on land donated to the Peconic Land Trust, and is part of a growing cadre of gender-diverse college graduates in their 20s and 30s who are changing the face of organic farming.

In the same town, Amanda Merrow co-runs Amber Waves farm with Katie Baldwin, whom she met during an apprenticeship program. Merrow said she had, quite simply, enrolled in the apprenticeship “with the intention of doing something else after,” but she fell in love with farming and couldn’t imagine doing anything else.

Women and non-binary people are running some of the best-known organic farms on Long Island, in what is a growing, $50 billion industry nationwide. Women make up a slightly larger share of organic farmers than conventional farmers, 37% to 36%, according to the U.S. Department of Agriculture, a share that is likely to continue to grow, experts say.

There is no national data on the share of transgender farmers in the United States, but HB Lozito, executive director of Vermont-based Out in the Open, an organization that connects rural LGBTQ people, says it is growing.

The average organic farm, according to a USDA survey from 2016, is about 350 acres – compared to 441 acres for a conventional farm.

These groups, and young farmers new to agriculture in general, are drawn to organic, sustainable farming because of a desire to do work with a social impact, Ackoff and several farmers said.

“They’re choosing to go organic because of the reasons they are going into agriculture in the first place: to protect natural resources for future generations, to fight climate change, to feed their community good, healthy food,” Ackoff said.

Many are working in New York state, where organic farming is growing twice as fast as the national average, the latest USDA agricultural census showed, thanks in part to strong regional demand for organic, locally-produced foods.

New York has over 1,000 certified organic farms, ranking it third in the country, behind California and Wisconsin, the USDA data shows. These farms account for nearly 4% of the state’s overall farm acreage, compared with a national average of roughly 0.6%.

While organic farming is growing quickly, it comes with high labor costs and potentially lower crop yields than conventional farming, so it can be a tough business for new farmers.

“When I look now at the starting of the farm, it seems really audacious,” Baldwin said. “But in that environment, in 2008, everybody had lost their jobs and there weren’t jobs – so it didn’t feel that weird to start something.”

At Amber Waves, Baldwin and Merrow grow vegetables, wheat, and herbs on about 20 acres. And along with Quail Hill, Amber Waves trains apprentices – the next generation of diverse, fledgling farmers, new to agriculture and encouraged by the farms’ gender-diverse leadership.

It isn’t just new farms that are sprouting new leadership. Marilee Foster’s family has been farming in Sagaponack, New York, for generations. An ancestor, a whaler named Josiah, turned to the land in the mid-1800s as overfishing destroyed his prospects at sea.

Marilee, 48, is the first woman in the family to fully co-manage the farm. She recently transitioned to organic farming not just for environmental reasons, but also because it made business sense: “I farm organically because that’s what people want.”