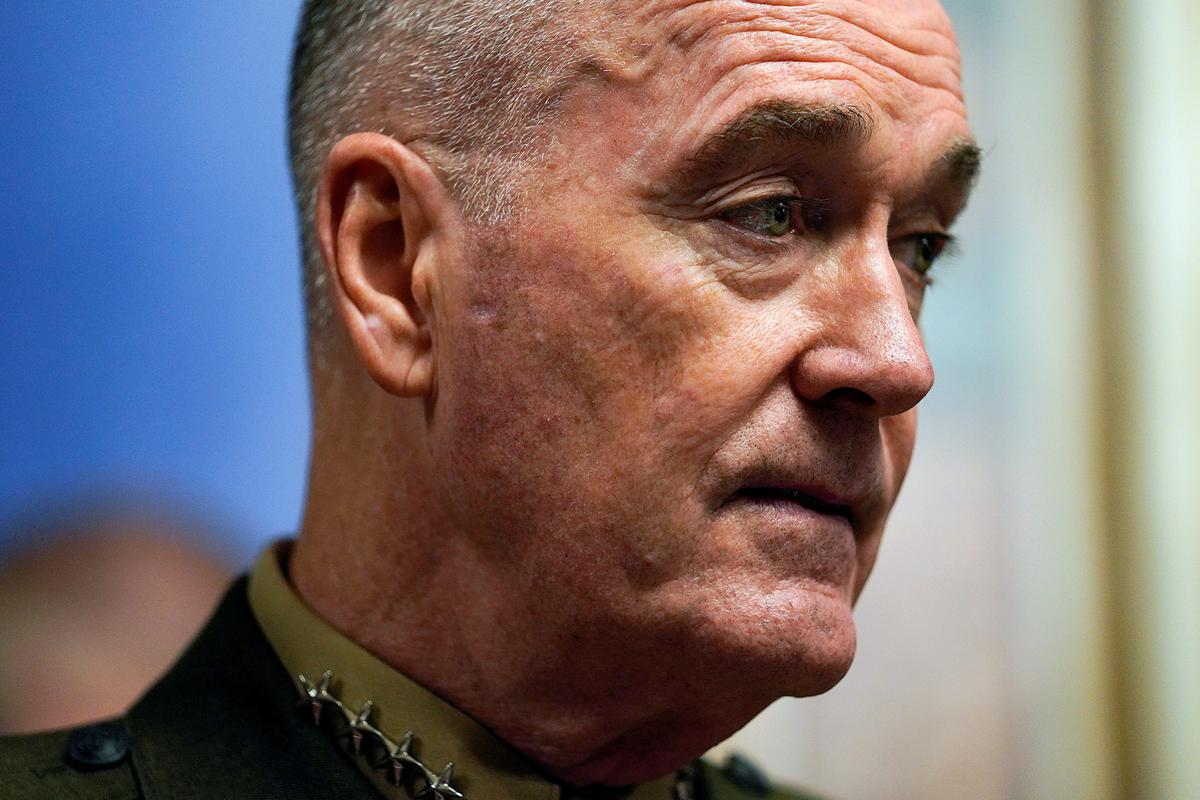 KABUL/WASHINGTON (Reuters) – The United States believes a proposed European initiative to bolster maritime security in the Gulf would complement ongoing U.S. efforts there instead of being a “stand-alone” operation, the top U.S. general said on Wednesday.

FILE PHOTO: Chairman of the Joint Chiefs of Staff General Joseph Dunford arrives to testify before a Senate Appropriations Defense Subcommittee hearing on the proposed FY2020 budget for the Defense Department on Capitol Hill in Washington, U.S., May 8, 2019. REUTERS/Aaron P. Bernstein

Washington in June first proposed some sort of multinational effort open to all allies and partners to bolster maritime security in the Gulf after accusing Iran of attacking oil tankers around the Strait of Hormuz, a critical maritime chokepoint between Iran and Oman.

Britain called this week for a European-led naval mission to ensure safe shipping through the strait after Iran seized a British-flagged tanker, raising questions about whether the U.S. initiative would move ahead separately.

Asked about the British proposal, U.S. Marine General Joseph Dunford, chairman of the Joint Chiefs of Staff, said his discussions “right now wouldn’t indicate that that’s a stand-alone effort that’s separate from ours.”

“I view that as a European contribution to maritime security that would be complementary, if not integrated, with what the United States is doing,” Dunford told a small group of reporters traveling with him in Afghanistan. He did not say whether he had discussed the matter directly with Britain.

Dunford said the U.S. military’s Central Command, which is headquartered in Tampa, Florida, would host a “force generation conference” on Thursday on the U.S. initiative. Such events usually aim to see what kinds of military assets partner nations might be able to contribute.

In Washington, Defense Secretary Mark Esper echoed Dunford’s comments, saying the European initiative was “complementary” and that there would be coordination.

“I think it’s all helpful,” Esper told reporters. “It’s all sending the same messages we’re trying to send – that is, freedom of navigation and no provocative acts in the strait.”

Washington’s major European allies have distanced themselves from President Donald Trump’s Iran strategy and opposed his decision last year to abandon an international agreement that gave Iran access to trade in return for accepting curbs on its nuclear program.

NOT LINKED TO ‘MAXIMUM PRESSURE’

U.S. officials have sought to distinguish their new maritime effort from Trump’s “maximum pressure” campaign against Iran, which has sought to force Tehran back to the negotiating table by imposing harsh sanctions.

They emphasize that the United States is not creating a coalition to confront Iran militarily and say the new initiative will not be operational in the way that, say, the U.S.-led coalition against Islamic State in Iraq and Syria functioned.

Instead, it is about increasing intelligence sharing, surveillance and international presence to deter more attacks on tankers in the waterway, like the ones seen in recent months.

“This is not related to the pressure campaign on Iran. It’s focused on freedom of navigation,” Dunford said.

Under a plan initially detailed on July 9, the United States would provide coordinating ships and lead surveillance efforts while participants in the coalition patrolled nearby waters and escorted commercial vessels with their nation’s flags.

The United States would not escort other nations’ commercial vessels.

Dunford said the U.S. plan would allow “those countries that are going to escort their ships to have the benefit of the information and the situational awareness that we have every day.”

Dunford said that in some ways, the initiative was already under way, albeit on a small scale.

“We shared intelligence in the two British operations that have taken place over the last 10 days,” Dunford said.

“So to me, it grows as contributions increase and as countries decide to escort the ships that have their flag.”

Esper, who was confirmed as defense secretary on Tuesday, said that if requested, the military could escort U.S. vessels. He said that did not mean there would be a U.S. warship following every American vessel and could simply mean aircraft in the area.

“Escort doesn’t mean they’re following right behind. But as long as you’re in the area that you can react quick enough to deter a provocation, that’s the key,” he said.

Esper added he would be traveling to the headquarters of U.S. Central Command in Florida next week to discuss the details.

Reporting by Phil Stewart in Kabul and Idrees Ali in Washington; Editing by Steve Orlofsky and Matthew Lewis

Big win for Joe Biden as Democrats land outright majority in the US Senate, NBC News projects
Supercar-maker McLaren in talks with investors about £250m fundraising
Millions flock to mark death of TikTok ‘bones, no bones’ star – Noodle the dog
After Falling For Christmas, Lindsay Lohan’s Return To Acting Put Her Opposite Santa Claus Thanks To Pepsi
UK ‘is already in a recession which is expected to last into next year’