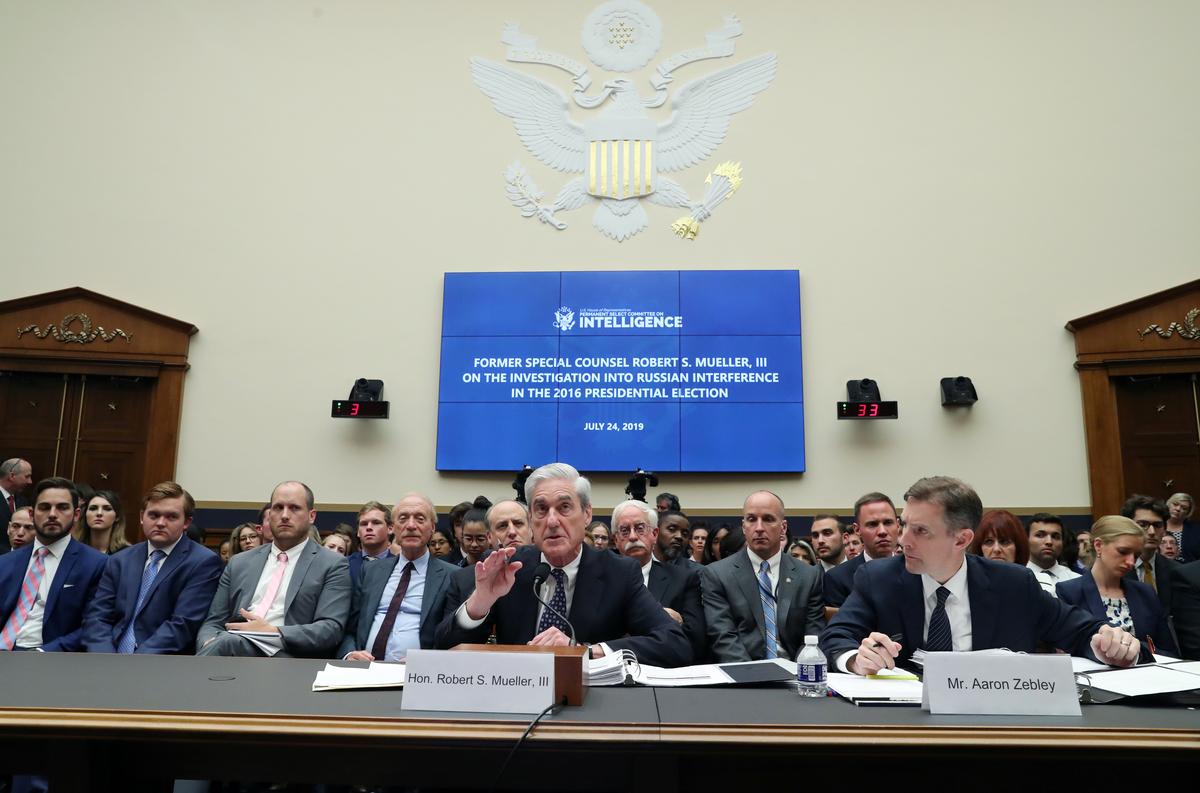 WASHINGTON (Reuters) – Former Special Counsel Robert Mueller emphasized on Wednesday he had not exonerated Donald Trump of obstruction of justice, as the president has claimed, but his long-awaited congressional testimony did little to add momentum to any Democratic impeachment ambitions and Trump heartily declared victory.

“This was a very big day for the Republican Party. And you could say this was a great day for me, but I don’t even like to say that,” the Republican president said after Mueller’s lengthy testimony in back-to-back hearings on his inquiry into Russian interference in the 2016 election to boost Trump’s candidacy.

During a day of sometimes dramatic high-stakes political theater, the former FBI director answered questions publicly for the first time on his investigation, with Democrats and Republicans taking familiar positions at a time of deep partisan divisions in the United States.

Mueller faced a rapid-fire succession of questions and sometimes struggled with his answers or sidestepped queries in hearings that lasted seven hours from start to finish.

The marathon televised hearings apparently left Democrats who control the House of Representatives no closer to launching the impeachment process to try to remove Trump even as he seeks re-election in 2020.

Mueller, for his part, refused to discuss the “impeachment issue.”

“The Democrats had nothing,” Trump told reporters outside the White House as he was leaving on a trip to West Virginia. “And now they have less than nothing. And I think they’re going to lose the 2020 election very big, including congressional seats, because of the path that they choose.”

Mueller spent 22 months investigating what he concluded was Russian interference in a “sweeping and systematic fashion” in the 2016 U.S. election to help Trump as well as the president’s actions to impede the inquiry.

Mueller defended the inquiry’s integrity under repeated attacks by Trump’s conservative Republican allies during the hearings before the House Judiciary and Intelligence committees. The president lauded those lawmakers as “incredible warriors.”

Democrats who wanted Mueller to bolster their case for impeachment or provide game-changing testimony about the president, and Republicans who wanted to show that the investigation was a politically motivated hit job on Trump engineered by his enemies, may have come away frustrated.

Mueller, a reluctant witness who appeared only after being subpoenaed, often gave terse responses like “I can’t speak to that,” “I’m not going to get into that,” and “It is beyond my purview,” or merely referred lawmakers to the text of his 448-page investigative report.

The Judiciary Committee’s Democratic chairman, Jerrold Nadler, said Mueller had endured “repeated and grossly unfair personal attacks” and that no one, including Trump, was “above the law.” The Intelligence Committee’s Democratic chairman, Adam Schiff, accused Trump’s 2016 campaign of “disloyalty to country” for inviting, encouraging and making full use of Russian election meddling.

Republican lawmakers tried to paint Mueller’s investigation as unfair to the president, with Louie Gohmert telling the decorated Vietnam War veteran and longtime federal prosecutor: “You perpetuated injustice,” and Guy Reschenthaler calling the manner in which the inquiry was conducted “un-American.”

“Welcome, everyone, to the last gasp of the Russian collusion conspiracy theory,” said Devin Nunes, the Intelligence Committee’s top Republican.

Mueller’s report, released in redacted form on April 18, did not reach a conclusion on whether Trump committed the crime of obstruction of justice with his actions aimed at undermining the inquiry, but did not exonerate him. The report also said the inquiry found insufficient evidence to establish that Trump and his campaign had engaged in a criminal conspiracy with Russia.

Trump has said the Mueller inquiry resulted in the president’s “complete and total exoneration.”

“Did you actually totally exonerate the president?” Nadler asked Mueller during the first hearing.

Mueller testified that his inquiry was conducted in “a fair and independent manner” and that members of the special counsel’s team “were of the highest integrity.”

“I think Robert Mueller did a horrible job, both today and with respect to the investigation,” Trump said, adding that as special counsel he “ruined people’s lives” and was part of an attempted “illegal overthrow.”

“There was no defense to this ridiculous hoax, this witch hunt that’s been going on for a long time,” Trump added.

Mueller explicitly testified that the investigation was neither a witch hunt nor hoax.

Mueller caused confusion when he testified while being questioned by Democratic Representative Ted Lieu during the first hearing that he would have sought to indict Trump were it not for a Justice Department policy against bringing criminal charges against a sitting president. But hours later at the outset of the second hearing, Mueller corrected himself.

“As we say in the report and as I said at the opening, we did not reach a determination as to whether the president committed a crime,” Mueller said.

Mueller added that a president could be charged with a crime after leaving office.

Democrats entered the hearings hoping his testimony would rally public support behind their own investigations of the president and his administration. Democrats are deeply divided over whether to launch the impeachment process set out in the U.S. Constitution for removing a president from office for “high crimes and misdemeanors.”

Trump has accused Mueller of having conflicts of interest, including saying Mueller wanted the president to appoint him as FBI director after firing James Comey in May 2017. Mueller disputed Trump’s account, saying he had not sought the FBI job from Trump. The Justice Department named Mueller as special counsel later that month.

Former Special Counsel Robert Mueller testifies before the House Intelligence Committee at a hearing on the Office of Special Counsel’s investigation into Russian Interference in the 2016 Presidential Election on Capitol Hill in Washington, U.S., July 24, 2019. REUTERS/Leah Millis

Questioned by Democrat Val Demings, Mueller said he “generally” agreed that Trump’s written answers to his investigators were not always truthful after the president refused to submit to a face-to-face interview. Mueller also said his team decided not to exercise its subpoena powers against Trump to force an interview last year because of “the necessity of expediting the end of the investigation.”

“Let me say one more thing,” Mueller said. “Over the course of my career, I have seen a number of challenges to our democracy. The Russian government’s effort to interfere with our election is among the most serious.”

Mueller said Russians were continuing to interfere in U.S. politics “and they expect to do it during the next campaign.”

Mueller, 74, was surrounded by news photographers as he took his place in the packed hearing rooms, showing little apparent emotion as he scanned the scene, and sought to avoid getting entangled in confrontations during the questioning. Mueller sometimes gave halting answers, several times asking lawmakers to repeat questions.

“That went a little fast for me,” Mueller told Doug Collins, the Judiciary Committee’s top Republican.

“And if I can finish,” Mueller told Republican Matt Gaetz after the congressman interrupted him.

Democrats gave him great deference even as he stonewalled many of their questions.

In a comment disappointing to Republicans, Mueller declined to answer questions about the origins of the Russia probe in the FBI before he was named to take over the inquiry or about a contentious dossier compiled by a former British intelligence agent.

Mueller’s inquiry detailed numerous contacts between Trump’s 2016 presidential campaign and Russia at a time when the Kremlin was interfering in the 2016 U.S. election with a scheme of hacking and propaganda to sow discord among Americans and boost Trump’s candidacy.

Democrats focused on five actions by Trump that Mueller had investigated as potential obstruction of justice, including at one point telling his White House counsel to remove the special counsel.

“Obstruction of justice strikes at the core of the government’s efforts to find the truth and to hold wrongdoers accountable,” Mueller testified.

Under questioning by Nadler, Mueller acknowledged that the report detailed “multiple acts by the president that were capable of exerting undue influence over law enforcement investigations, including the Russian interference and obstruction investigations.”

“Well, the finding indicates … that the president was not exculpated for the acts that he allegedly committed,” Mueller told Nadler.

“Although department policy barred you from indicting the president for this conduct, you made clear that he is not exonerated. Any other person who acted in this way would have been charged with crimes. And in this nation, not even the president is above the law,” Nadler told Mueller.

Republican Representative Steve Chabot said Wednesday’s hearing was the “last, best hope” by Democrats “to build up some sort of groundswell across America to impeach President Trump.”

THIC Enters the Hair Cleansing Game + More Beauty News
Top 10 Books of 2022
How Mariah Carey Celebrates Christmas With Her Twins Moroccan & Monroe
Little Mermaid Actress Gets Support From Tara Strong And More After Posting TikTok Of Original Part Of Your World Recording
This Breakfast Sandwich Maker With 23,200+ 5-Star Reviews Is on Sale