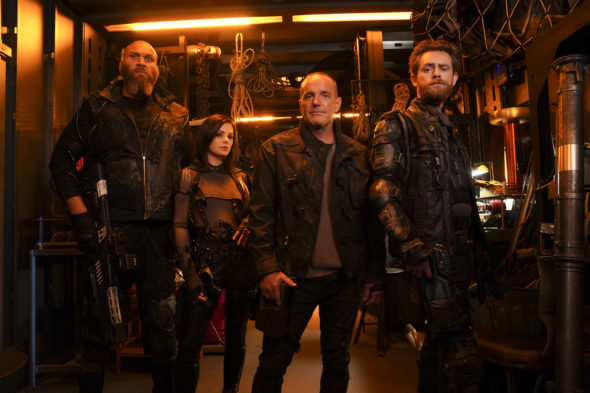 With less-than-impressive ratings and fears of being cancelled each year, Marvel’s Agents of SHIELD is ending on its own terms.

The ABC TV show will come to a close with a seventh season of 13 episodes, which will air Summer 2020. The sixth season is currently airing on Friday nights. The two-hour season finale airs August 2nd.

Here’s the announcement from ABC:

ABC announced today that “Marvel’s Agents of S.H.I.E.L.D.,” the longest-running Marvel television series, will end after seven seasons. The final 13 episodes are scheduled to air next summer. Season six is currently airing FRIDAYS at 8 p.m. ET/PT on ABC and will air its finale on Aug. 2 with a special two-hour episode.
Currently, ABC’s “Marvel’s Agents of S.H.I.E.L.D.” ranks as the No. 1 program in Friday’s 8 p.m. hour this summer among Adults 18-49 and is improving in its new time period by 14% over the comparable weeks last summer to stand as ABC’s highest-rated series in the slot in 3 years – since  summer 2016.

“Agent Coulson is one of the most beloved cinematic heroes of our time, and we’re so glad to have spent seven seasons with him and the S.H.I.E.L.D. agents as they saved the world from countless unimaginable big bads,” said Karey Burke, president, ABC Entertainment. “I am so impressed with the eternally fresh, heart-pounding, and emotional stories the writers and creative team at Marvel Television brought to life that led ‘S.H.I.E.L.D.’ to be the longest-running Marvel series to date.”

“It will be bittersweet saying goodbye to Marvel Television’s flagship series,” said Jeph Loeb, executive producer and Marvel’s head of Television. “Our success is a true testament to the extraordinary fans and we remain forever indebted to them for their endless support. We want to end on a very high note and complete the incredible saga after seven amazing seasons and 136 hours of quality television.”

Produced by ABC Studios and Marvel Television, “Marvel’s Agents of S.H.I.E.L.D.” was co-created by Joss Whedon, Jed Whedon and Maurissa Tancharoen, who also serve as executive producers along with Jeffrey Bell and Jeph Loeb.

What do you think? Do you like the Marvel’s Agents of SHIELD TV show? Is it ending at the right time? Would you have watched season eight?