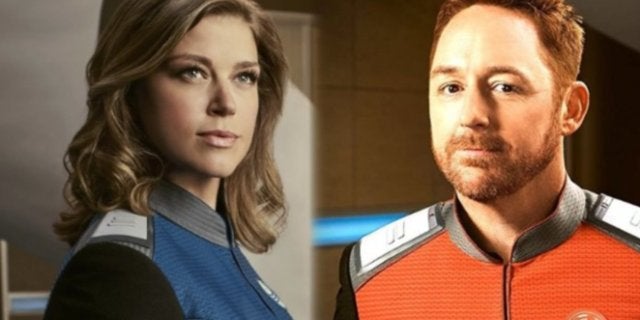 Just two months after getting married, The Orville stars Adrianne Palicki and Scott Grimes appear to be calling it quits. TMZ is reporting that Palicki has officially filed for divorce from Grimes, although it is currently unclear what led to the split.

Palicki stars in the series as USS Orville First Officer Kelly Grayson, with Grimes portraying Lieutenant Gordon Malloy. The pair announced their engagement in January of this year and were married in Austin, TX, in May.

“What a magical night in Austin, Texas yesterday.” Ming-Na Wen, who previously co-starred with Palicki in Marvel’s Agents of SHIELD, wrote at the time. “Not only have I had the great fortune to have worked with Adrianne and Scott, but I also am so lucky to have them as my friends. They are beautiful inside and out! And when Scott started tearing up as his gorgeous bride walked down the aisle, my heart welled up and my insides turned to mush. Congrats!”

This marks the first divorce for Palicki, and the third for Grimes. He previously married Dawn Bailey in 1997, and Megan Moore in 2011. She was previously engaged to Captain America: Civil War and Avengers: Infinity War stuntman Jackson Spidell, but they split before getting married.

This comes just days after the pair were spotted at last weekend’s San Diego Comic-Con together, as part of promotion for The Orville‘s forthcoming season. During the show’s panel, it was revealed that the series would be making a leap from FOX to Hulu.

“The Orville has been a labor of love for me, and there are two companies which have supported that vision in a big way: 20th Century Fox Television, where I’ve had a deal since the start of my career, and FOX Broadcasting Company, now FOX Entertainment, which has been my broadcast home for over 20 years.” creator and star Seth MacFarlane said in an official statement. “My friends at the network understood what I was trying to do with this series, and they’ve done a spectacular job of marketing, launching and programming it for these past two seasons. But as the show has evolved and become more ambitious production-wise, I determined that I would not be able to deliver episodes until 2020, which would be challenging for the network. So we began to discuss how best to support the third season in a way that worked for the show. It’s exactly this kind of willingness to accommodate a show’s creative needs that’s made me want to stick around for so long. I am hugely indebted to Charlie Collier and FOX Entertainment for their generosity and look forward to developing future projects there. And to my new friends at Hulu, I look forward to our new partnership exploring the galaxy together.”

What do you think of Palicki and Grimes splitting up? Share your thoughts with us in the comments below!