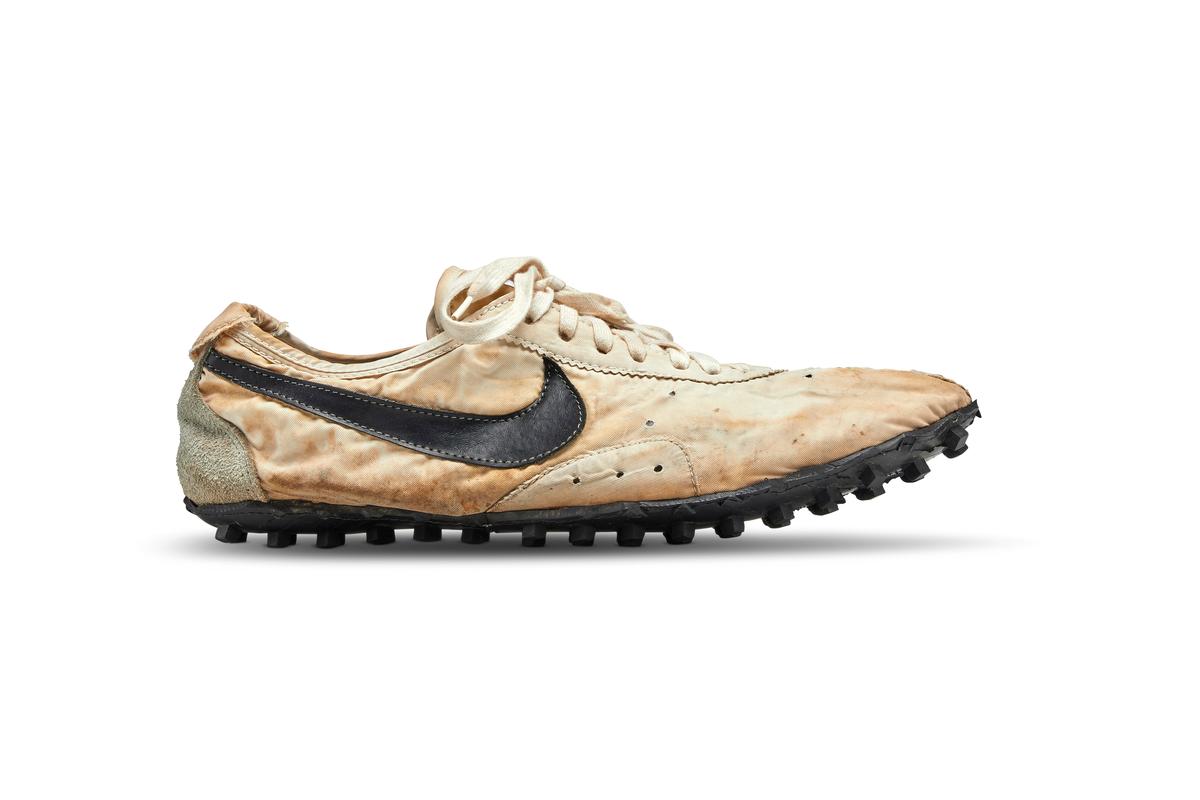 The Nike “Moon Shoe” one of only about 12 pairs of the handmade running shoe designed by Nike co-founder and legendary Oregon University track coach Bill Bowerman, is seen in this Sotheby’s image released on July 11, 2019. Courtesy Sotheby’s/Handout via REUTERS ATTENTION EDITORS – THIS IMAGE HAS BEEN SUPPLIED BY A THIRD PARTY. NO RESALES. NO ARCHIVES.

(Reuters) – A pair of 1972 running shoes, one of the first pairs made by Nike, sold for $437,500 on Tuesday, shattering the record for a pair of sneakers at public auction.

The so-called Nike “Moon Shoe,” designed by Nike co-founder and track coach Bill Bowerman for runners at the 1972 Olympics trials, was the top lot in the first-ever auction dedicated to sneakers at Sotheby’s auction house in New York.

Sotheby’s said the price was a world auction record for a pair of sneakers. The buyer in the online auction was not immediately known.

The highest previous price fetched at public auction for sneakers is thought to be $190,373 in California in 2017 for a pair of signed Converse shoes said to have been worn by Michael Jordan in the 1984 Olympic basketball final.

Sotheby’s, better known for selling art works fetching tens of millions of dollars, teamed up with streetwear marketplace Stadium Goods to auction 100 pairs of the rarest sneakers ever produced in a venture that reflects their fast-growing status as collectibles.

The other 99 pairs of sneakers originally up for auction were bought privately as a single lot last week for $850,000, Sotheby’s said.

They were acquired by Canadian car collector and investor Miles Nadal who plans to display them at his private automobile museum in Toronto, Sotheby’s said.

Nadal’s haul included 2011 and 2016 versions of the “Back to the Future Part II” limited-edition shoes by Nike that were inspired by the 1989 film starring Michael J. Fox, and limited-edition sneakers produced by Adidas, Air Jordan and rapper Kanye West’s Yeezy collection.

Texas Migrant deaths: Truck driver was pretending to be survivor when arrested
Book Riot’s Deals of the Day for June 30, 2022
After Taylor Lautner’s Fiancée Joked About Having Had A Crush On Robert Pattinson, The Twilight Alum Shared A Funny Response
Blake Horstmann and Giannina Gibelli Go Instagram Official, Finally Confirm “Secret” Romance
Tom Swift: Cancelled by The CW; No Season Two for Mystery Drama Series