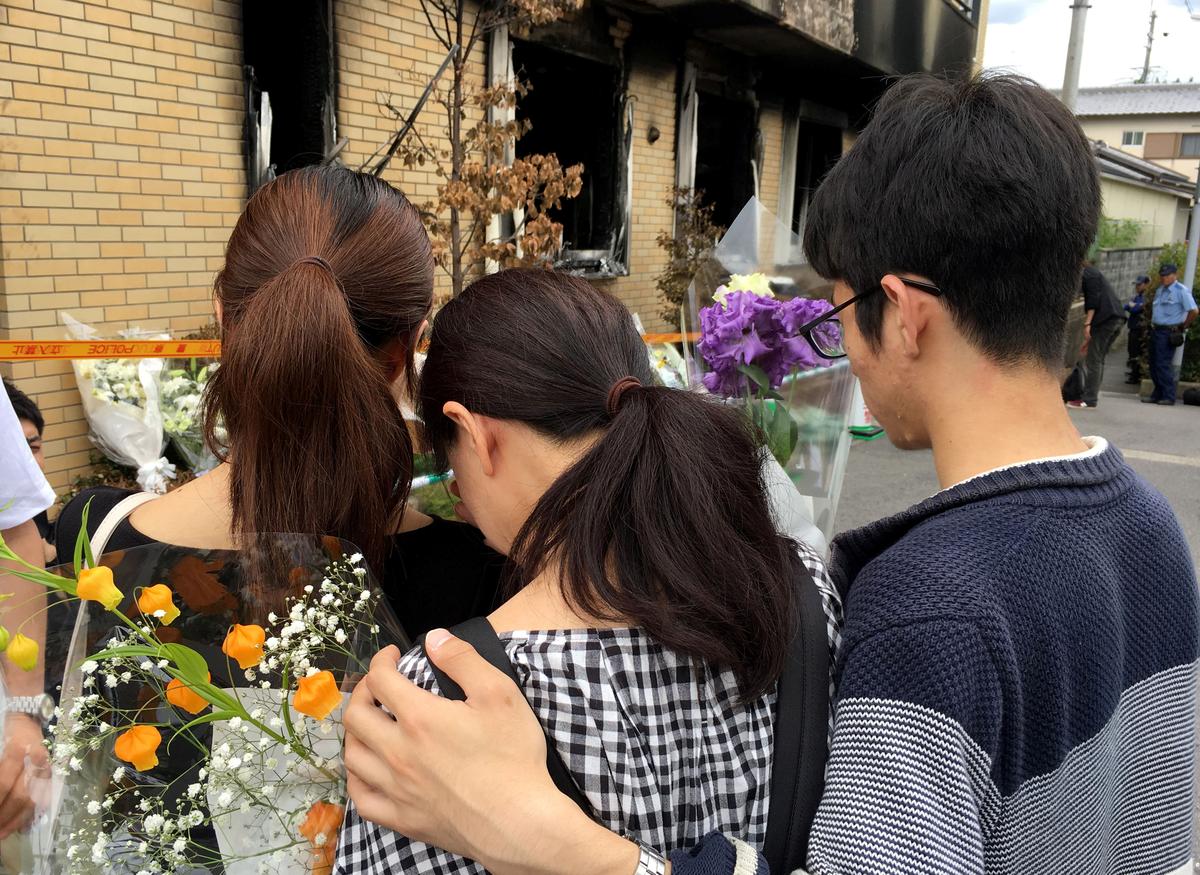 KYOTO, Japan (Reuters) – The two men, friends since high school, were in touch on social media a week ago about getting together for a drink. But on Sunday, one was mourning the other, a victim of the arson attack on a Japanese animation studio that has claimed 34 lives.

People react as they visit the Kyoto Animation building which was torched in an arson attack, in Kyoto, Japan, July 21, 2019. REUTERS/Tim Kelly

Thursday’s attack on Kyoto Animation, when a man walked in and poured a bucket of gasoline at the entrance to the three-storey building, was the worst mass killing in two decades in a nation with one of the world’s lowest crime rates.

“He was quite a shy person, so he didn’t tell people that he’d managed to get a job at the studio. He was a great drawer. Working at an animation studio was his dream,” the 30-year-old friend, who declined to give his name, said near the site of the studio, a burnt hulk at the end of a quiet residential street.

“When I heard about the fire and couldn’t contact him, I thought maybe he had lost his phone or had been taken to hospital,” he said, voice cracking, of his 30-year-old friend, declining to name him at the family’s request.

“His parents said they couldn’t get in touch with him, so they contacted me.”

A steady stream of mourners visited the building over the weekend despite hot and humid weather, bringing flowers and offering prayers. Many have been in tears, a tribute both to the global fame of the company and the youth of most of the victims.

Yoshiaki Hagino, a 41-year-old who came from 200 kilometers away to pay his respects, worked at the company for three years from 2002 and echoed others who spoke of how close-knit a place it was, with pick-up basketball games during lunch break and chatting groups heading out to buy food together.

“For an animation company they treat their staff well,” said Hagino, who said former colleagues had probably still worked for the firm.

“They work people hard on productions, but when things are quieter it is pretty relaxed and people have a laugh, sometimes go out for drinks. There were a lot of women there compared to other places.”

An online fundraising drive called “Help KyoAni Heal” – referring to the company’s nickname – conducted by U.S. firm Sentai Filmworks had raised $1.81 million as of Sunday noon, reflecting the wide global esteem in which its work is held.

Late on Saturday, police issued an arrest warrant for Shinji Aoba, 41, a loner from a city near Tokyo who poured gasoline around the entrance to the studio and shouted “Die!” as he set it ablaze, according to national broadcaster NHK

Aoba, who was seriously burned, was airlifted to a university hospital for treatment on Saturday and NHK said police planned to arrest him once he recovered.

Some of the mourners questioned the company’s security. The building was usually accessible only through a card system, but Japanese media quoted company president Hideaki Hatta as saying that was deactivated on Thursday due to the presence of visitors from outside the firm.

Yoshiyoi Miki, 62, said the sister of his son-in-law was one of the victims.

“She was a gentle person. We’d have a meal as a family, maybe once or twice a year,” he said. “She lived alone. I heard her sister was clearing out her apartment yesterday.”

Most of the victims died from carbon monoxide poisoning, media has said, but Miki said his relative could not be identified and DNA testing was being done.

“I think the security at the company was bad, they just let him in. They should have waited until the person he was supposed to meet came down,” he said.

“I can feel only anger towards the criminal who did this.”

The Merger of Penguin Random House and Simon & Schuster Is Dead in the Water
MPs can claim Christmas parties on expenses for first time
English cricket bowled over with £400m private equity bid for The Hundred
“You Are Love” delivers on the sheer physical rush of dance music, as HAMX holds nothing back
Jodie Sweetin Has a Golden Idea for Fuller House Reboot