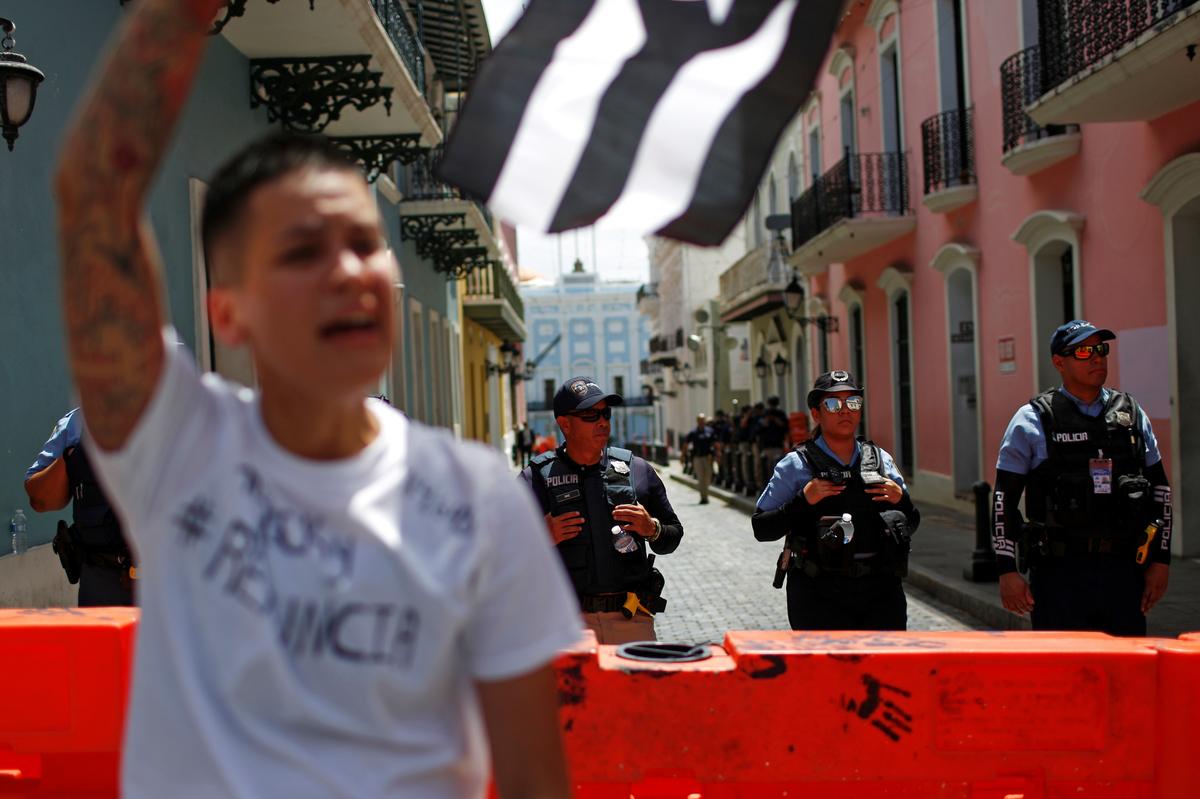 (Reuters) – Thousands of Puerto Ricans, led by protesters on horseback and with some banging drums and singing, marched on the governor’s residence on Friday demanding that he resign over hundreds of vulgar and offensive leaked chat messages.

The march on Governor Ricardo Rossello’s official San Juan residence was the latest in a week of sometimes violent protests over the messages attacking political adversaries, some of which were misogynistic and homophobic.

The chats on a Telegram message group were published on Saturday, adding to Rossello’s woes the same week that two of his former officials were arrested by the FBI as part of a federal corruption probe in the bankrupt U.S. territory.

The protests are the latest troubles to rock Puerto Rico, which has been pummeled by bankruptcy and whipped by a devastating hurricane in 2017 that took a toll on the Caribbean island’s already fragile economy.

Hundreds of protesters on Friday gathered in streets near the governor’s residence chanting, waving flags, banging pots and pans. Some carried placards reading “They Rob Us,” according to videos posted on Twitter.

Puerto Rico’s nonvoting representative in the U.S. Congress, Jenniffer Gonzalez, on Friday called for the resignation of Rossello, who is head of Puerto Rico’s New Progressive Party and affiliated with the U.S Democratic Party.

With a string of U.S. Democratic presidential candidates and lawmakers also calling on Rossello to quit, the governor convened an emergency meeting with party leaders. No time or date was set for the gathering.

The political turmoil comes at a critical stage in the U.S. territory’s bankruptcy. It has also raised concerns with U.S. lawmakers who are weighing the island’s requests for billions of federal dollars for healthcare and for recovery efforts following devastating hurricanes in 2017.

Rossello has apologized for the messages, saying they were “inappropriate” but not “illegal.” On Friday he sent tweets showing him carrying on with business as usual.

In a report published on Friday, Puerto Rico’s influential bar association cited clear grounds to impeach the 40-year-old former scientist, based on the “depravity” of the messages. The group’s president, Edgardo Roman, recommended the island’s legislature begin the process.

Puerto Rico has never carried out a political impeachment, according to legal experts, and while opposition legislators back it the process yet to gain critical support from lawmakers in Rossello’s governing party.

The 889 pages of messages revealed by Puerto Rico’s Center for Investigative Journalism showed how Rossello and advisers exchanged memes and comments that were derogatory, misogynistic and homophobic, as well as privileged information.

Book Riot’s Deals of the Day for July 2, 2022
Chris Pratt Denies Involvement With Controversial Hillsong Church
The 35 best memoirs of 2022 (so far)
Besomorph Teams Up With Vocalist Ryan Curtis For Captivating New Single, “So Low”
UK to raise defence spending as NATO chief warns of danger of ‘full-scale’ war with Russia