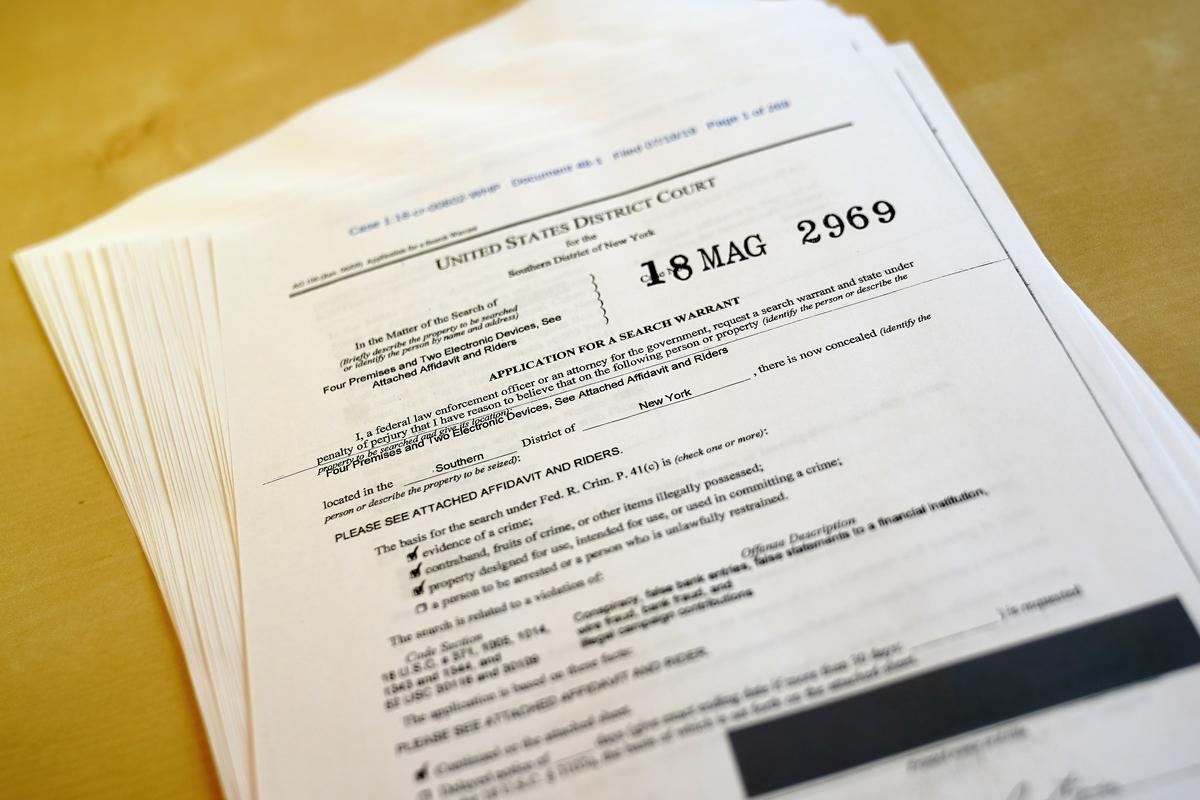 The documents, released on the orders of U.S. District Judge William Pauley in Manhattan, were used by law enforcement officials to obtain a 2018 search warrant that led to FBI raids on Cohen’s home and office.

The White House and a lawyer for Hicks did not respond to a request for comment on the documents.

Cohen, 52, pleaded guilty in August 2018 to violating campaign finance law by directing the payment to Daniels as well as another payment of $150,000 to Playboy model Karen McDougal shortly before the election.

Both women have said they had sexual encounters with Trump more than a decade ago and that the money was meant to buy their silence. Trump has denied the encounters and in 2018 told reporters he knew nothing about a payment to Daniels.

The newly unredacted material includes a 19-page section of the FBI’s search warrant application with the heading: “The Illegal Campaign Contribution Scheme.” It shows Cohen having multiple interactions with Trump and Trump’s campaign staff as Cohen was negotiating the payoff with Daniels’ lawyer and executives of American Media Inc, publisher of the National Enquirer tabloid newspaper.

A lawyer for AMI did not respond to a request for comment on the documents.

The National Enquirer’s publisher had offered to help Trump by buying rights to unflattering stories and never publishing them.

Before the payoff negotiations began, Cohen spoke on the phone with Trump approximately once a month and rarely had phone contact with Trump’s presidential campaign staff, the search warrant application said. The FBI documents do not provide the content of the calls.

Beginning on Oct. 8, there was a sharp uptick in calls with Trump and his campaign staff. That evening – a month before the election and in the immediate aftermath of the “Access Hollywood” tape that caused a political firestorm and prompted a rare apology from Trump – Hicks, Cohen and Trump held a three-way phone call lasting more than four minutes, the FBI document said.

Over the course of the evening, Cohen had several calls with Hicks, AMI President David Pecker, a friend of Trump, and Dylan Howard, AMI’s chief content officer, before calling Trump back for eight minutes. The FBI documents do not provide the content of the calls.

Later that evening, Howard then sent Cohen a text message: “Keith will do it,” the message said, in an apparent reference to Keith Davidson, a lawyer for Daniels who would end up receiving the $130,000 payment for Daniels from Cohen later that month. “Let’s reconvene tomorrow.”

The next day, Howard connected Cohen and Davidson in a text message to begin the payoff negotiations, the document stated.

Hicks testified before the U.S. House of Representatives Judiciary Committee earlier this year that she was never present for any discussion during the campaign between Trump and Cohen about Daniels.

Adam Schiff, the Democratic chairman of the House Intelligence Committee, said in a statement that the documents demonstrate Trump was “intimately involved in devising and executing a corrupt scheme” to keep the Daniels matter secret.

“The inescapable conclusion from all of the public materials available now,” Schiff added, “is that there was ample evidence to charge Donald Trump with the same criminal election law violations for which Michael Cohen pled guilty and is now serving time in prison.”

The documents show that Hicks spoke with Cohen several times about the importance of keeping the Daniels and McDougal stories from “gaining national traction.”

Not long after the Wall Street Journal published an article online four days before the Nov. 8 election, the documents showed Cohen sent a text message to Hicks saying the article was getting “little to no traction,” prompting her to respond: “Same. Keep praying!! It’s working!”

On the same day as that text, Howard texted Cohen about the Wall Street Journal story, saying, “I think it’ll be ok pal. I think it’ll fade into the distance,” the documents showed. Cohen responded, “He’s pissed,” an apparent reference to Trump, according to the documents.

Cohen, who was once Trump’s self-described “fixer,” began serving a three-year prison sentence in May for his campaign finance violations and other crimes, including making false statements to a bank and tax evasion.

In a statement released from prison on Thursday, Cohen reiterated his previous comments about Trump’s central role in the hush money scheme, referring to the president’s company in saying, “I and members of The Trump Organization were directed by Mr. Trump to handle the Stormy Daniels matter; including making the hush money payment.”

The judge on Wednesday said there was no reason to keep the documents secret after prosecutors told him that their investigation into the payments had ended.

White House aide’s astonishing testimony may help January 6th committee resonate with the public
French-made howitzers are being used to hold back Russians in the Donbas – but it might not be enough
Stranger Things Star Reveals How Frustration Fueled Shocking Billy and Max Scene
How To Directly Impact Democracy: Book Censorship News, July 1, 2022
Q-Force: Cancelled, No Season Two for Adult Animated Series on Netflix