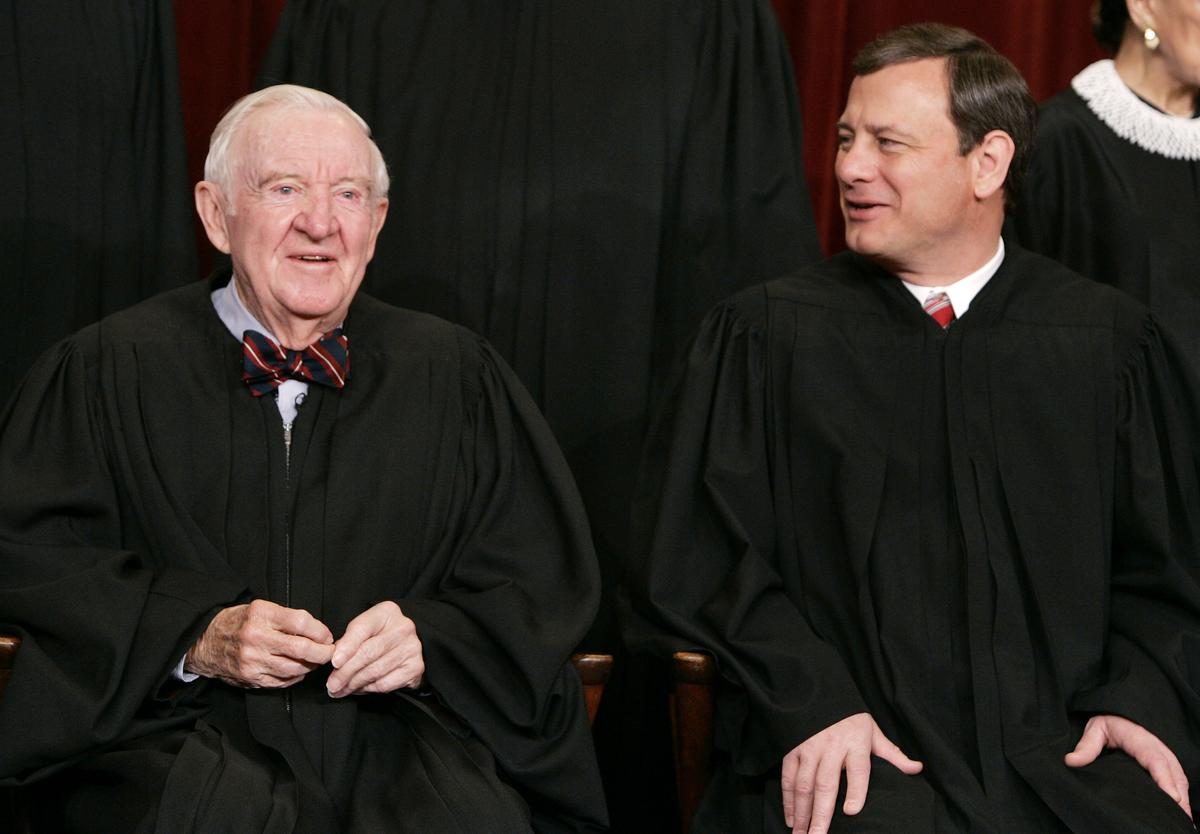 WASHINGTON (Reuters) – Former Justice John Paul Stevens, a Republican appointee to the U.S. Supreme Court who later became an outspoken leader of the liberal wing as the court moved to the right, died on Tuesday at age 99.

Stevens, who retired from the court in 2010 at the age of 90, died at a hospital in Fort Lauderdale, Florida, of complications from a stroke he suffered on Monday, a statement issued by the Supreme Court said.

He was appointed by President Gerald Ford in 1975 and became one of the longest-serving justices in U.S. history. Still in good health when he left the bench, he carved out a new role as a critic of some of his former colleagues on issues such as voting rights, campaign finance and the death penalty.

“He brought to our bench an inimitable blend of kindness, humility, wisdom, and independence. His unrelenting commitment to justice has left us a better nation,” Chief Justice John Roberts said in the statement.

The idiosyncratic Stevens, known for wearing a bow tie with his traditional black robes and for his love of tennis, initially built a record as a maverick with a reputation as a non-partisan, highly independent jurist. His views evolved during his time on the bench, not least on the death penalty, which he initially supported. He announced in 2008 that he believed it was unconstitutional.

Stevens, once at the ideological center of the court and one of its sharpest thinkers and best writers, often wrote separate concurring or dissenting opinions that reflected his hard-to-label judicial philosophy. He was also widely known for his polite demeanor when questioning the lawyers before him, in contrast to some of his more combative colleagues.

As the court moved to the right in the early 1990s under Chief Justice William Rehnquist, Stevens became the leader of the liberal faction on the nine-justice court that included three other justices. That continued when Roberts replaced Rehnquist in 2005, with the justices often sharply divided on social issues.

Stevens embraced other liberal positions by supporting abortion and gay rights, gun restrictions, limits on government aid for religion and legalization of marijuana.

Stevens was considered a brilliant tactician and often built coalitions that won a court majority, such as in rulings that rejected the George W. Bush administration’s legal positions in the war on terrorism.

He wrote the court’s opinions that detainees at the U.S. military base at Guantanamo Bay in Cuba could challenge their confinement in U.S. courts and that struck down as illegal the military tribunal system for terrorism suspects.

In 2007, Stevens also wrote the court’s opinion that handed the Bush administration a defeat by ruling U.S. environmental officials have the power to regulate greenhouse gas emissions that contribute to climate change.

Earlier in his career, he wrote the majority opinion in an infamous 1978 obscenity case concerning a public radio station’s broadcast of a colorful monologue by comedian George Carlin called “Filthy Words.” Stevens said the Federal Communications Commission could impose fines for the broadcast of offensive words in a ruling that was viewed as a blow to First Amendment freedoms.

Stevens was known throughout his career for his dissenting opinions, most notably in 2000 when the court’s 5-4 ruling halted ballot recounts in Florida and effectively gave the presidency to Republican Bush over Democrat Al Gore.

“Although we may never know with complete certainty the identity of the winner of this year’s presidential election, the identity of the loser is perfectly clear. It is the nation’s confidence in the judge as an impartial guardian of the rule of law,” Stevens wrote in dissent.

In one of his last major opinions, Stevens delivered an impassioned dissent in January 2010 from the court’s ruling on the Citizens United case that allowed corporations to spend freely on candidates for president and Congress.

“The court’s ruling threatens to undermine the integrity of elected institutions across the nation,” Stevens said as he read his dissent from the bench.

Stevens became more outspoken in his views after he retired and was openly critical of the increasingly conservative court he left behind.

The last time Stevens made headlines was in October last year when he intervened in the confirmation fight over President Donald Trump’s second Supreme Court nominee, Brett Kavanaugh.

He said Kavanaugh, who faced allegations of sexual misconduct dating back to his teenage years, should not be confirmed by the U.S. Senate because of partisan comments the nominee made at his confirmation hearing. Kavanaugh was ultimately confirmed.

Born on April 20, 1920, to a wealthy family in Chicago, Stevens served in the U.S. Navy during World War Two and helped crack Japanese communication codes. He graduated from Northwestern University’s law school and worked at the Supreme Court as a law clerk to Justice Wiley Rutledge in 1947-48.

He came to prominence as a member of a commission that forced the resignation of two Illinois Supreme Court justices.

Stevens’ tenure on the Supreme Court began on Dec. 19, 1975, after his nomination was quickly and unanimously approved by the Senate.

He came to Ford’s attention after distinguishing himself on the U.S. Court of Appeals in Chicago, a position to which he was appointed by President Richard Nixon in 1970.