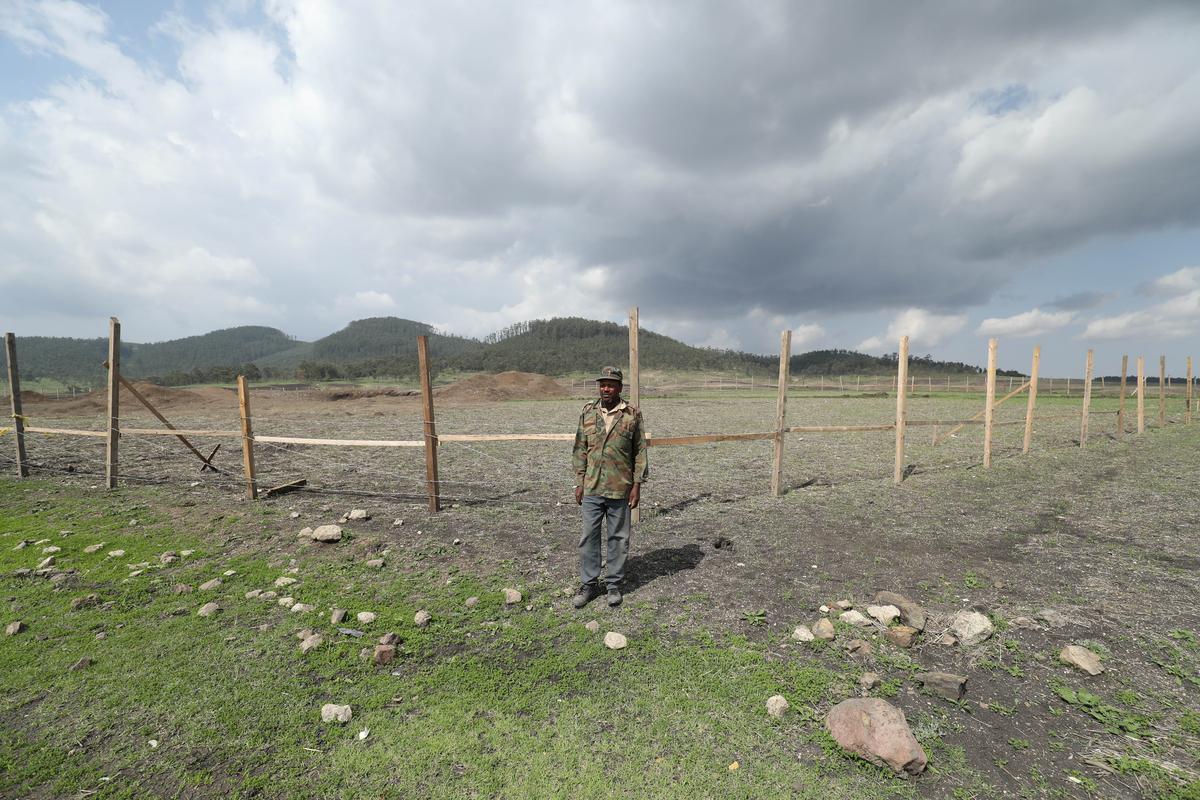 NAIROBI (Reuters) – Before flying to Washington to climb the steps of Congress and testify to a crowd of aviation experts and lawmakers this week, Paul Njoroge spent a desolate weekend packing away toys his children would never play with again.

Malka Galato, 47, the owner of the farmland where Ethiopian Airlines Flight ET 302 crashed, stands next to a fenced site in Dhaka Bora kebele, near Bishoftu, Ethiopia July 8, 2019. REUTERS/Tiksa Negeri

All three of them – chubby baby Rubi, four-year-old songstress Kelli, and six-year-old Ryan, who dreamed of being an astronaut – were killed alongside his wife Carolyne and mother-in-law Anne on Ethiopia Airlines Flight 302 on March 10.

“Without them I feel nothing. I’m empty,” the 35-year-old investment professional told Reuters by telephone from his company house in Bermuda. “The pain will never go away. I will think of them every minute for the rest of my life.”

The crash of the new Boeing 737 MAX model, six minutes after take-off, came months after the same model crashed in Indonesia.

Preliminary reports in both cases highlighted the role of an automated system that erroneously pointed the plane’s nose down as pilots struggled to override it. The two crashes killed 346 people.

Njoroge, like many of the victims’ families, has filed a lawsuit accusing Boeing Co of negligence.

He has not been able to work since the crash, which occurred during his family’s visit to their native Kenya. Getting justice is the only thing that gets him out of bed in the morning, he said.

“For most of these families, our lives stopped completely with the crash,” he said. “What motivates us now is to be an advocate for aviation safety.”

He will testify in Congress at Wednesday’s hearing, along with Dana Schulze, acting director of the National Transportation Safety Board’s Office of Aviation Safety, and officials from aviation workers’ unions.

Boeing has not yet been called to testify.

In an emailed statement, Boeing said it deeply regretted the loss of lives and would work with communities, customers and the aviation industry to help the healing process. “These incidents and the lives lost will continue to weigh heavily on our hearts and on our minds for years to come,” it said.

In written testimony seen by Reuters ahead of the hearing, Njoroge said he wanted Congress to probe not only Boeing, but the certification process of the U.S. government’s Federal Aviation Administration, which deemed the plane safe.

Boeing’s 737 MAX was grounded worldwide after the Ethiopian crash in March. Before the model is approved to fly again, Njoroge said he and other families want recertification of the entire plane, whose original design dates to the 1960s.

Grounding the model after the first crash would have saved his family, he said. Now all that is left are sellotaped boxes – filled with children’s art work and Ryan’s football – that he hopes to be strong enough to look at again one day.

“I think about their last six minutes a lot. My wife and mum-in-law knew they were going to die. They had to somehow comfort the children during those final moments,” Njoroge said in his written testimony.

“I have nightmares about how they must have clung to their mother, crying, seeing the fright in her eyes.”