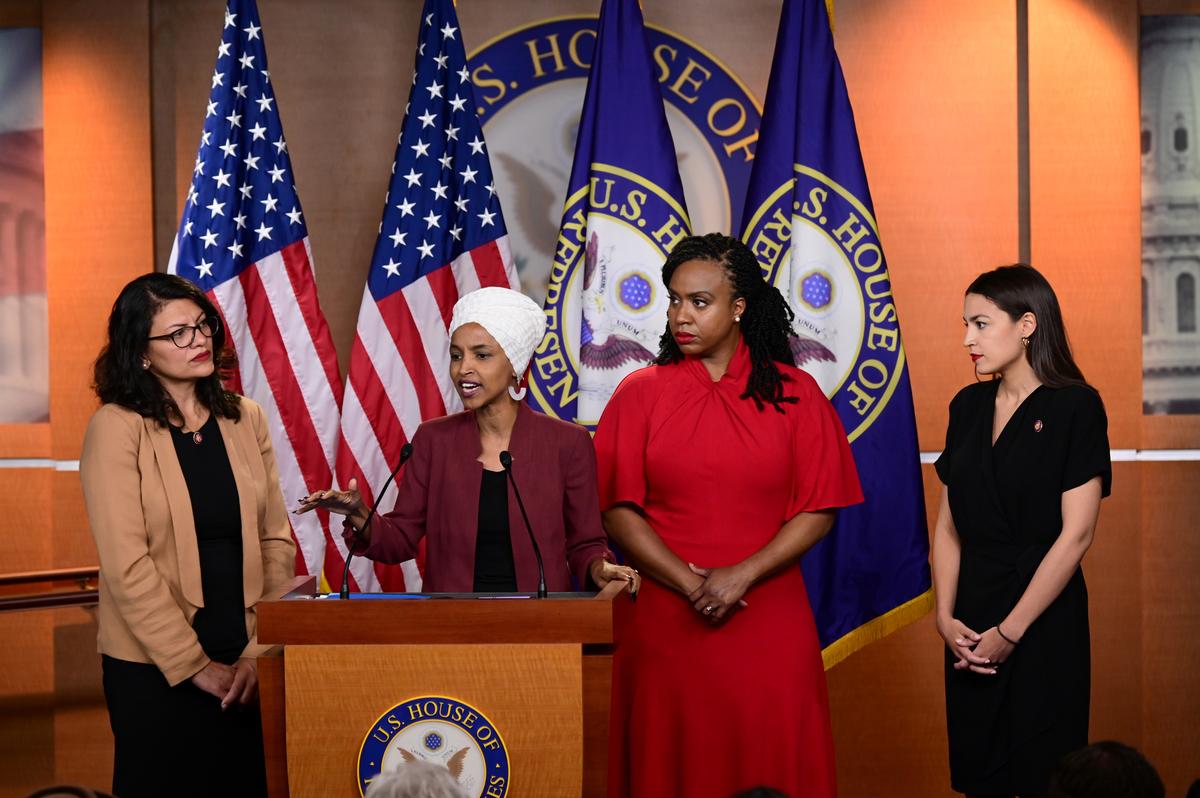 WASHINGTON (Reuters) – President Donald Trump pressured fellow Republicans on Tuesday to stand with him and vote against a symbolic measure condemning his racially charged attacks on four Democratic congresswomen.

Democrats, who have a majority in the U.S. House of Representatives, were expected to pass the symbolic resolution of condemnation on Tuesday evening. But it is Republican lawmakers who will be in the spotlight as they will be forced to either vote against their party’s leader, who has strong support among conservatives, or effectively defend him.

Outrage over Trump’s Sunday tweetstorm – in which he told four prominent minority Democratic congresswomen to “go back and help fix the totally broken and crime infested places from which they came” – has since diverted attention from all other business in Washington.

All four lawmakers are U.S. citizens; three were born in the United States.

“These are our sisters,” House Speaker Nancy Pelosi said of the four lawmakers targeted by Trump, who are in their first terms in Congress, during a closed caucus meeting on Tuesday, according to an aide who was present.

Pelosi said she hoped some Republicans would support the resolution. “If they can’t support condemning the words of the president, well, that’s a message in and of itself,” she said.

The lawmakers – Alexandria Ocasio-Cortez of New York, Ilhan Omar of Minnesota, Ayanna Pressley of Massachusetts and Rashida Tlaib of Michigan – have been critical of Trump, as well as of the current Democratic leaders of the House, straining party unity in that chamber.

Trump has a history of what critics consider race-baiting. He led a movement that falsely claimed former President Barack Obama was not born in the United States and he said after a deadly, white supremacist-led rally in Charlottesville, Virginia, that “both sides” were to blame for violence there.

Only a handful of Republican lawmakers have spoken out against Trump’s tweets about the congresswomen, doing so in muted tones.

The resolution, seen by Reuters late on Monday, said the House “strongly condemns President Donald Trump’s racist comments that have legitimized and increased fear and hatred of new Americans and people of color.”

House Republican Leader Kevin McCarthy said he would encourage his members to vote against the resolution condemning Trump.

FILE PHOTO – U.S. President Donald Trump speaks at the third annual “Made in America Product Showcase” on the South Lawn of the White House in Washington, U.S., July 15, 2019. REUTERS/Leah Millis

Trump was asked by reporters at the White House where he thought the four American lawmakers should go.

“It’s up to them. Do what they want. They can leave. They can stay. But they should love our country, and they should work for the good of our country,” Trump said, adding complaints about some of their past remarks.

Earlier, Trump had warned Republicans on Twitter against voting against him. “Those Tweets were NOT Racist. I don’t have a Racist bone in my body! The so-called vote to be taken is a Democrat con game. Republicans should not show ‘weakness’ and fall into their trap.”

In response, Ocasio-Cortez tweeted: “You’re right, Mr. President – you don’t have a racist bone in your body. You have a racist mind in your head, and a racist heart in your chest.”

‘Communist Party, step down!’: Rare protests in China as anger grows over COVID lockdowns and fatal fire
Jodie Sweetin Has a Golden Idea for Fuller House Reboot
Little Mermaid Actress Gets Support From Tara Strong And More After Posting TikTok Of Original Part Of Your World Recording
THIC Enters the Hair Cleansing Game + More Beauty News
What is Alzheimer’s, how common is it – and will new drug lecanemab help patients in the UK?