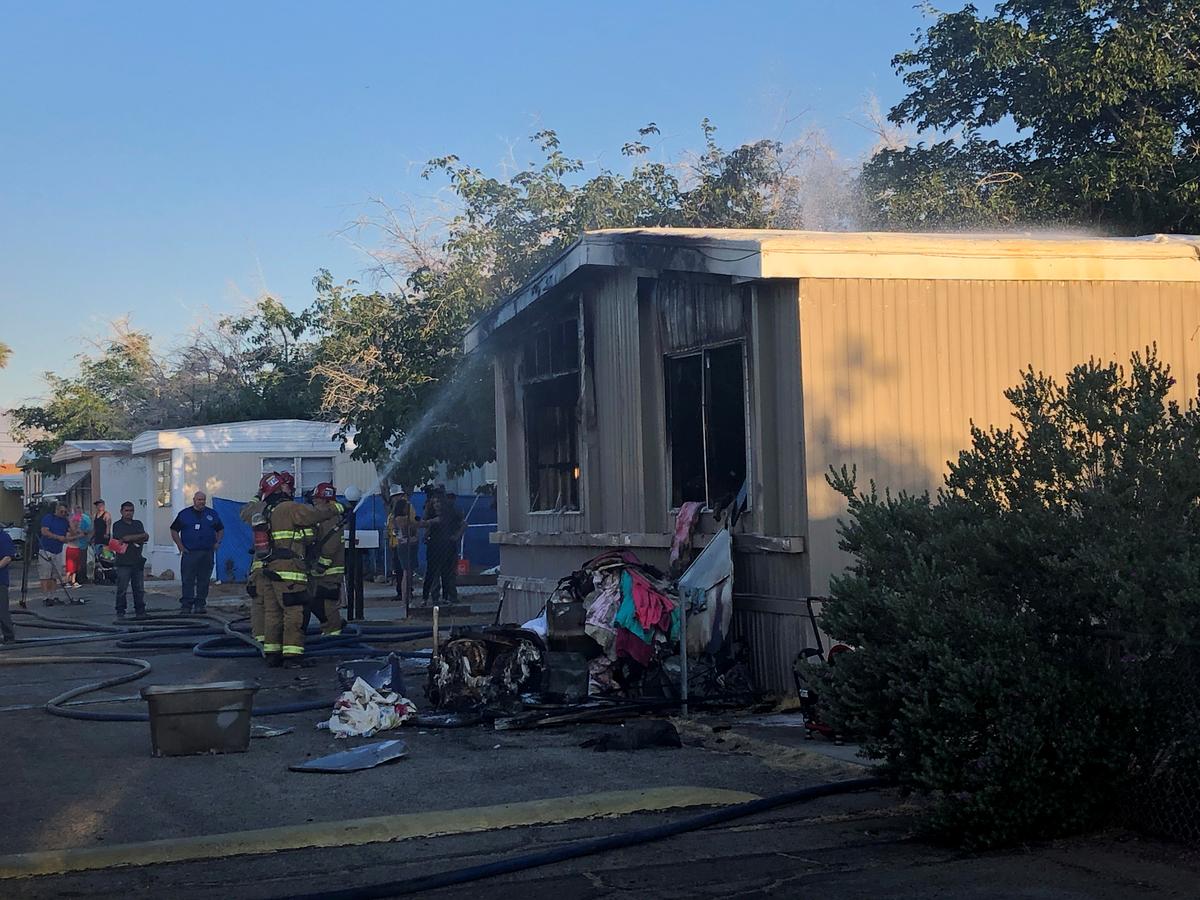 RIDGECREST, Calif. (Reuters) – High desert communities in Southern California on Saturday braced for potentially dangerous aftershocks from a major earthquake that damaged buildings, ruptured gas lines and sparked fires near the remote epicenter of the second temblor in as many days.

The powerful magnitude 7.1 tremor rocked the Mojave Desert town of Ridgecrest south of Death Valley National Park as darkness fell on Friday, jolting the area with eight times more force than a 6.4 quake that struck the same area 34 hours earlier.

“We have significant reports of fires, structural fires, mostly as a result of gas leaks or gas-line breaks,” OES Director Mark Ghilarducci told a late-night news conference on Friday.

Violent shaking also caused water-main breaks and knocked out power and communications to parts of Ridgecrest, home to about 27,000 people some 125 miles (200 km) northeast of Los Angeles.

No fatalities or serious injuries were reported from either quake, police said.

“This was a very large earthquake, and we also know there’s going to be a series of aftershocks as a result of the main quake,” Ghilarducci said, adding that his agency faces a challenge getting resources to the isolated quake zone. “This is not going to be something that’s going to be over right away.”

Overnight, about six hours after the main quake, the center of Ridgecrest was quiet, except for the occasional rumble of aftershocks. Some residents could be seen sitting on lawn chairs in the darkness outside. The garage doors of many homes were left open with a car parked on the driveway.

The facility, which at more than 1.1 million acres (445,000 hectares) is larger than the state of Rhode Island, reported no injuries. Authorities were assessing any damage to buildings or other infrastructure, according to a post on the base’s Facebook page.

Firefighters work on extinguishing a fire after an earthquake in Ridgecrest, California, U.S., July 6, 2019. REUTERS/Alan Devall

Friday’s earthquake was widely felt across Southern California, including greater Los Angeles, where shaking in some areas lasted about 40 seconds. Low-level rumbling extended as far north as the San Francisco Bay area and beyond to Reno, Nevada, and as far east as Phoenix, Arizona.

Seismologists said the initial quake on Thursday, and scores of smaller ones that followed it, proved to be foreshocks to Friday’s larger temblor, which now ranks as Southern California’s most powerful since a 7.1 quake that struck near a U.S. Marine Corps base in the Mojave Desert in 1999.

As of 7:30 a.m. on Saturday, there had been around 500 aftershocks of 2.5 magnitude or greater in the area surrounding the epicenter, according to data from the USGS.

Victor Abdullatif was helping clean up broken bottles and other debris inside his father’s liquor store, the Eastridge Market, which sustained damage to its ceiling, and found the periodic aftershocks unnerving.

“They’re still scary because you almost don’t know, ‘Is this going to be a full earthquake?’ You have to kind of have faith that it’s just an aftershock,” he told Reuters.

South of Ridgecrest, there were reports of a building collapse and gas leaks in the small town of Trona, home to about 2,000 residents, Ghilarducci said.

A rockslide closed State Road 178 in Kern County, and video footage posted on Twitter showed a stretch of road had buckled.

The last major destructive quake to hit Southern California was the 6.7 magnitude Northridge quake in 1994, which struck a densely populated area of Los Angeles. It killed 57 people and caused billions of dollars in property damage.

The comparatively limited damage from Friday’s quake, which packed greater force than the Northridge event, was a function of its location in a remote, less developed area.

Its ground motion, however, startled seismically jaded Southern Californians over a wide region.

Pools in Los Angeles sloshed wildly, and TV cameras at Dodger Stadium were shaking as they filmed the night Major League Baseball game between the Los Angeles Dodgers and San Diego Padres.

A television anchorwoman ducked out of sight during a local newscast as shouts of “get under a desk” were heard in the background.