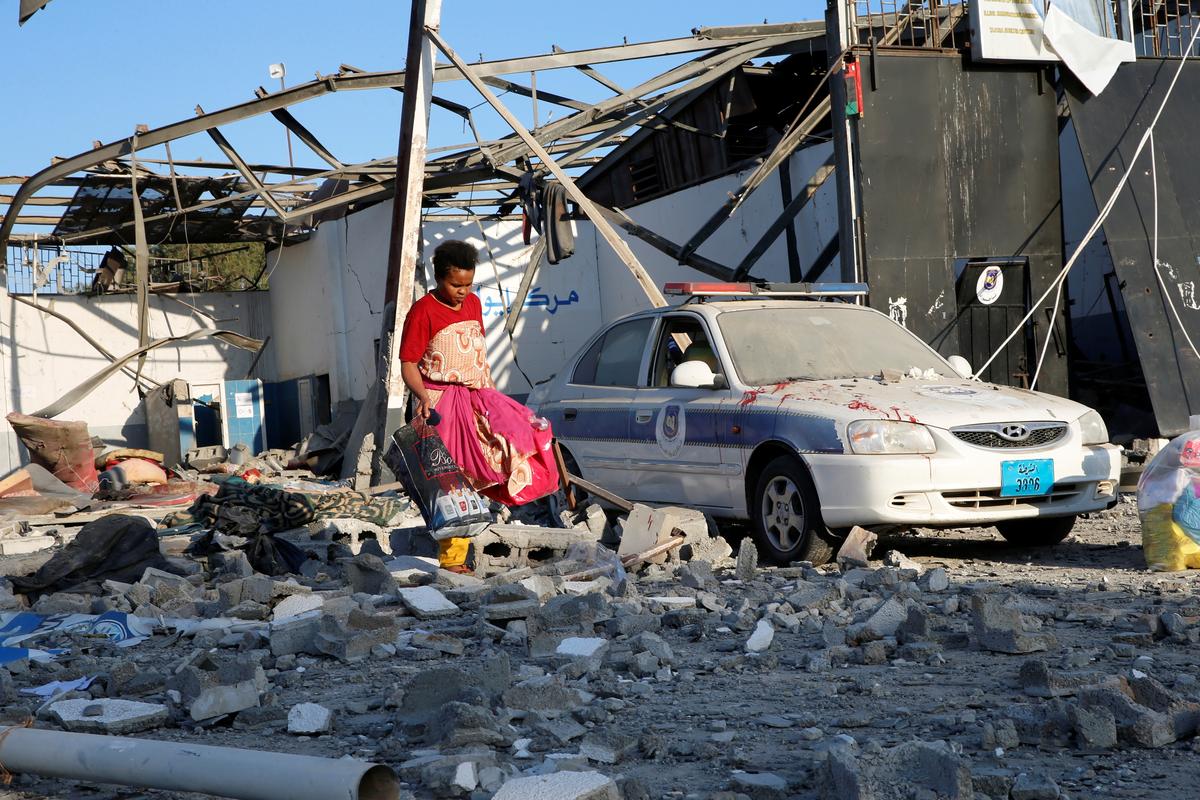 GENEVA (Reuters) – The United Nations said on Thursday it had information that Libyan guards shot at refugees and migrants trying to flee from air strikes that killed at least 53 people, including six children, in a migrant detention center.

A migrant picks up clothes from among rubble at a detention centre for mainly African migrants that was hit by an airstrike in the Tajoura suburb of the Libyan capital of Tripoli, Libya July 3, 2019. REUTERS/Ismail Zitouny

A report from the U.N. Office for Coordination of Humanitarian Affairs (OCHA) said there were two air strikes late on Tuesday, one hitting an unoccupied garage and one hitting a hangar containing around 120 refugees and migrants.

“There are reports that following the first impact, some refugees and migrants were fired upon by guards as they tried to escape,” the OCHA report said.

Bodies were still being recovered from the rubble, the report said, suggesting the death toll could rise.

There are still about 500 people at the detention center at Tajoura, east of Tripoli, with four Nigerians set for release to the Nigerian embassy on Thursday and a plan for 31 women and children to be sent to the U.N. refugee agency’s departures facility in Tripoli.

Libya is one of the main departure points for African migrants fleeing poverty and war to reach Italy by boat, but many are intercepted at sea and brought back by the Libyan coast guard, with the approval of the European Union.

The 53 dead was the highest publicly reported toll from an air strike or shelling since eastern forces under Khalifa Haftar launched a ground and aerial offensive three months ago to take Tripoli, the base of Libya’s internationally recognized government in the northwest of the country.

“The number of civilian casualties caused by the conflict has almost doubled as the result of this single attack,” the OCHA report said, a day after U.N. officials said the air strikes may have constituted a war crime.

The United Nations has repeatedly said Libya is not a safe place for rescued migrants to be sent back to and has called for refugees and migrants to be released and given safe shelter.

It has declined to directly criticize Italy for shutting its doors but said European states must help to resolve the conflict in Libya in order to stop people taking perilous sea journeys.

The center is close to a military base and an air strike on nearby Libyan government forces on May 7 injured two people in the center. Despite the risks, Libyan authorities had continued to transfer migrants and refugees into the center, according to the U.N. report.

On May 12, 108 refugees and migrants picked up at sea by the Libyan Coast Guard were disembarked and transferred to the Tajoura detention center, the report added.

How to Level Up Your Look With KK & Jay
Chicago Med Spoilers: How Will Brian Tee Be Written Off the Show?
Willow Review: Disney+ Sequel Series Is Worth the Wait — Fun, Accessible Fantasy at Its Most Charming
Balenciaga Addresses “Grievous Errors” Amid Controversial Ad Campaigns
Senior Tory joins growing rebellion trying to force PM into U-turn over onshore wind ban