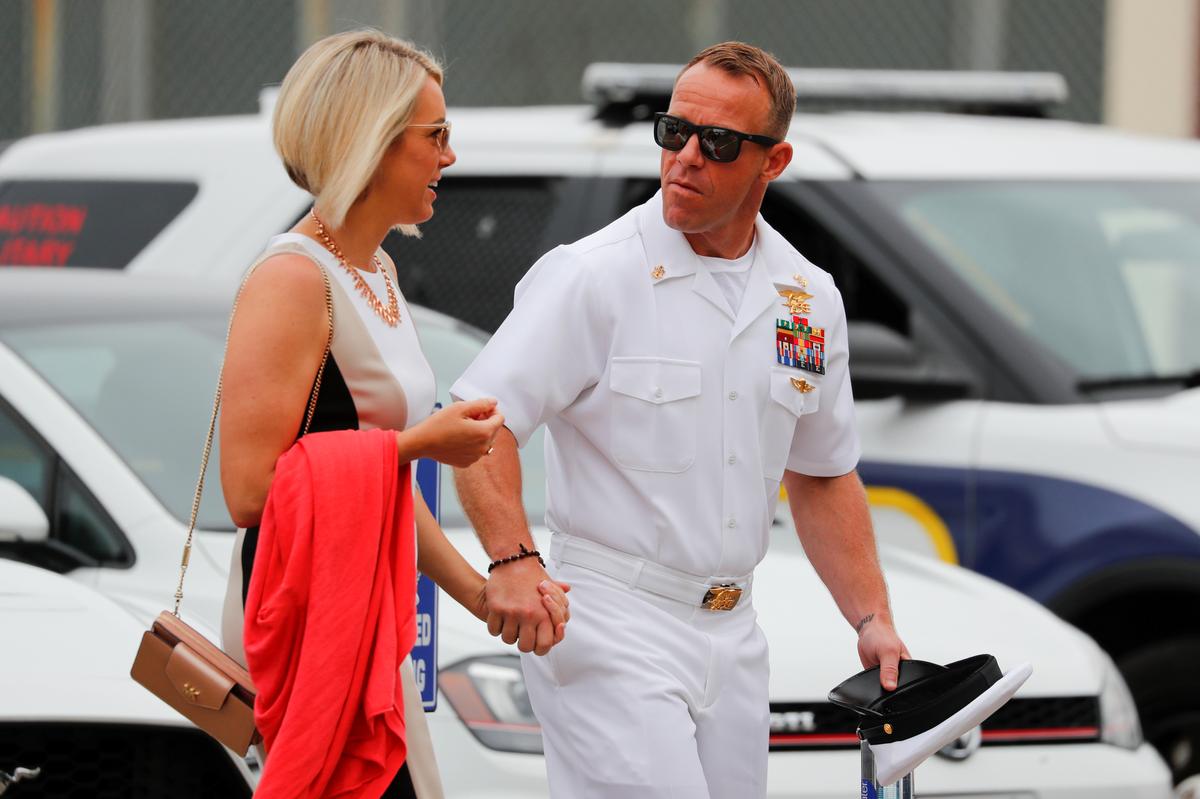 SAN DIEGO (Reuters) – A military jury began deliberations on Monday in the war crimes trial of a U.S. Navy SEAL after closing arguments in which prosecutors said the defendant’s own words proved his guilt and the defense cited a lack of physical evidence to support the charges.

The case against Special Operations Chief Edward Gallagher, whose prosecution has drawn White House interest, went to a seven-member jury of U.S. Marines and Navy personnel as the trial phase of his court-martial entered its third week.

The judge said he was willing to allow the jury to work as late as 10 p.m. on Monday ((0500 GMT Tuesday). But the session was adjourned without a verdict 2-1/2 hours later at the panel’s request. The jurors were to due resume deliberations on Tuesday morning.

A verdict requires agreement of at least five of the seven jurors. If a conviction is rendered, the jurors will then determine the sentence.

The 39-year-old platoon leader is charged with committing the premeditated murder of a captured Islamic State fighter, brought to Gallagher’s outpost for medical treatment, by repeatedly stabbing the teenage prisoner in the neck with a custom-made knife.

Gallagher also is charged with attempted murder in the wounding of two non-combatants – a schoolgirl and an elderly man – shot from a sniper’s perch, as well as with obstruction of justice and unlawfully posing for photos with the detainee’s corpse.

The chief petty officer, a decorated career combat veteran who was arrested after his eighth overseas deployment, could face life in prison if convicted.

President Donald Trump intervened in Gallagher’s case months ago, ordering that he be moved from pretrial detention in a military brig to confinement at a Navy base. The presiding judge later released Gallagher from custody altogether.

Gallagher has denied all charges, insisting that disgruntled subordinates with no prior battlefield experience fabricated allegations against him because of grievances with his leadership style and combat tactics.

The Navy formally opened its investigation in September 2018, about a year after Gallagher’s platoon returned from its deployment to Mosul in northern Iraq.

‘NO FORENSICS, NO CASE’

In his summation on Monday, civilian defense lawyer Timothy Parlatore said prosecutors and Navy investigators succumbed to “tunnel vision” in their determination to build a case to support allegations against Gallagher, rather than conducting an impartial inquiry.

He also pointed to a lack of physical evidence to bolster the charges. “No body, no evidence, no science, no forensics, no case,” Parlatore declared. “The ship has run around.”

The senior prosecutor, Navy Commander Jeffrey Pietrzyk, asserted, however, that Gallagher had implicated himself. Pietrzyk cited a photo that Gallagher sent to a friend in May 2017 showing him posed with the Iraqi detainee’s corpse, with the text message: “I got a cool story for you when I get back. I got him with my hunting knife.”

In a surprise twist during the trial’s first week, a Navy SEAL medic testified that it was he, not Gallagher, who caused the death of the gravely injured Iraqi detainee by blocking his breathing tube in what the witness described as a mercy killing.

Last week, two defense witnesses who were present during the incident, an Iraqi general and a U.S. Marine sergeant who served as the unit’s intelligence officer, insisted they never saw Gallagher or anyone else from the SEAL platoon stab or otherwise mistreat the detainee before he died.

Another SEAL team member who acted as a sniper’s spotter for Gallagher testified he never saw the defendant shoot an unarmed elderly non-combatant.

The jury consists of five Marines and two Navy personnel, all but one with combat experience. Six of the panelists are enlisted personnel and just one is an officer.